Hundreds of Monarch butterflies paused in the Texas Hill Country this weekend as winds from the south and temperatures in the 90s prevented the migrating insects from continuing their journey south. 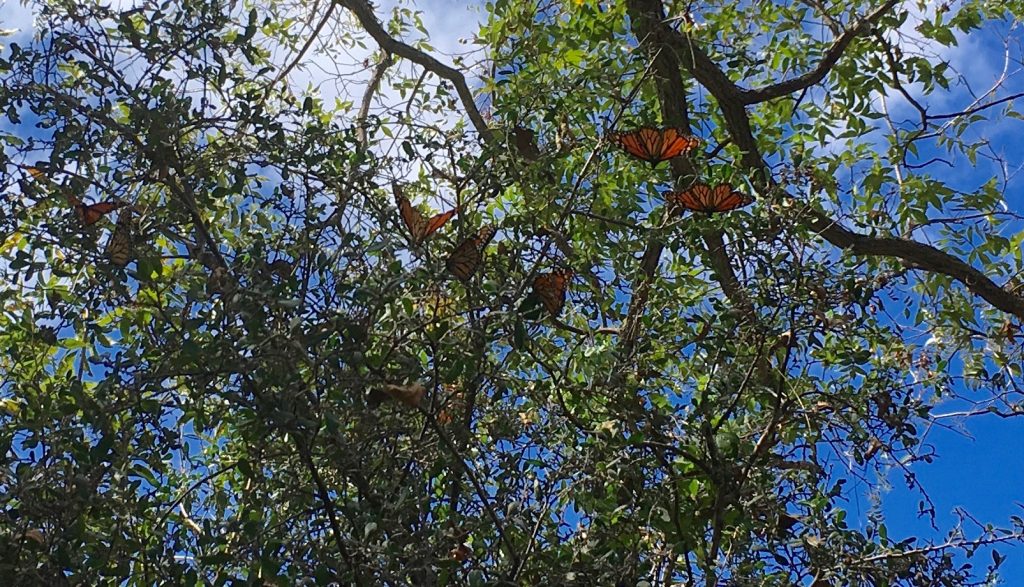 Small clusters of six-12 Monarch butterflies battled the wind and 90-degree temperatures along the Llano River this weekend. Photo by Monika Maeckle 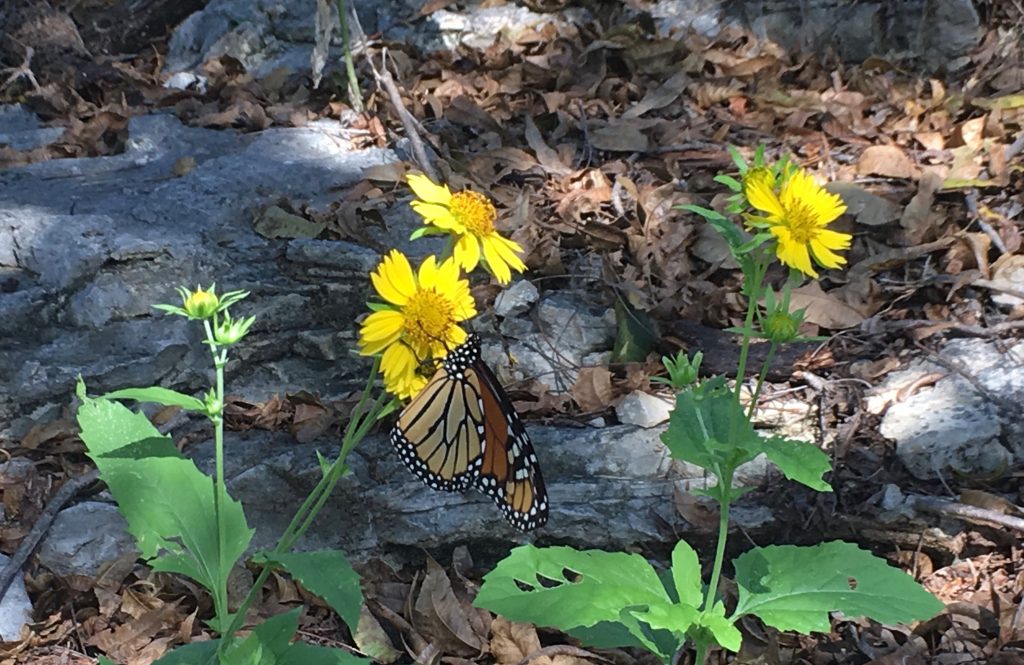 On the river banks, Swamp milkweed, Asclepius incarnata, host plant for Monarchs and Queens, showed fresh foliage for late season caterpillars, providing plenty of host plant for those Monarchs who chose to ditch the migration and reproduce locally. 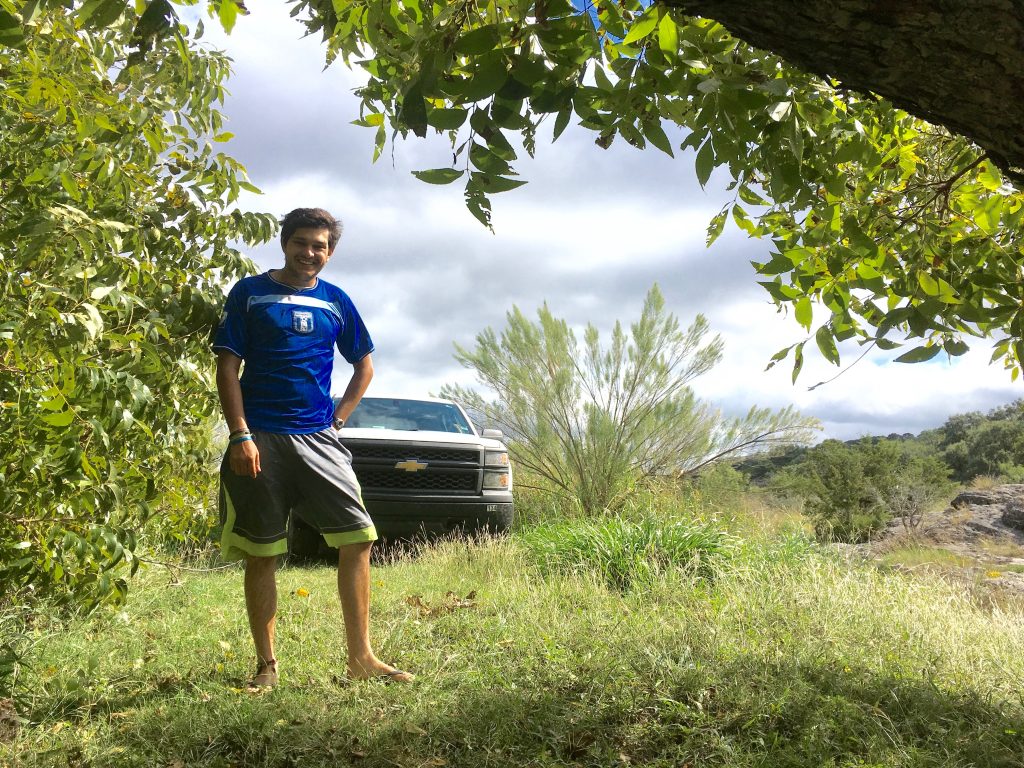 David Berman, PhD candidate in the integrative biology program at Oklahoma State University, made the second of three scheduled visits to the ranch this weekend. 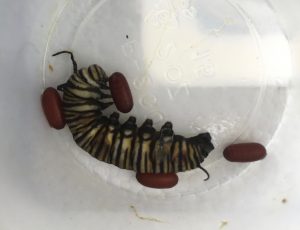 Eeew.Monarch caterpillar killed by the parasitoid Tachinid fly larvae. Those red “pills” are the pupae of the fly. Photo by Monika Maeckle

Berman is gathering data for a study funded by the Texas State Comptroller’s Office and other organizations, looking at the impacts of parasitoids and fifth generation Monarch butterflies on the migrating Monarch population.
In the back of his white Durango, Berman carried an entire ice chest filled with dead Monarch and Queen caterpillars collected in Texas and infected with Tachinid flies. The gross fly has a science fiction-like life cycle: it deposits its eggs on Monarchs and other caterpillars, which then hatch inside the caterpillar and eat it from the inside out. 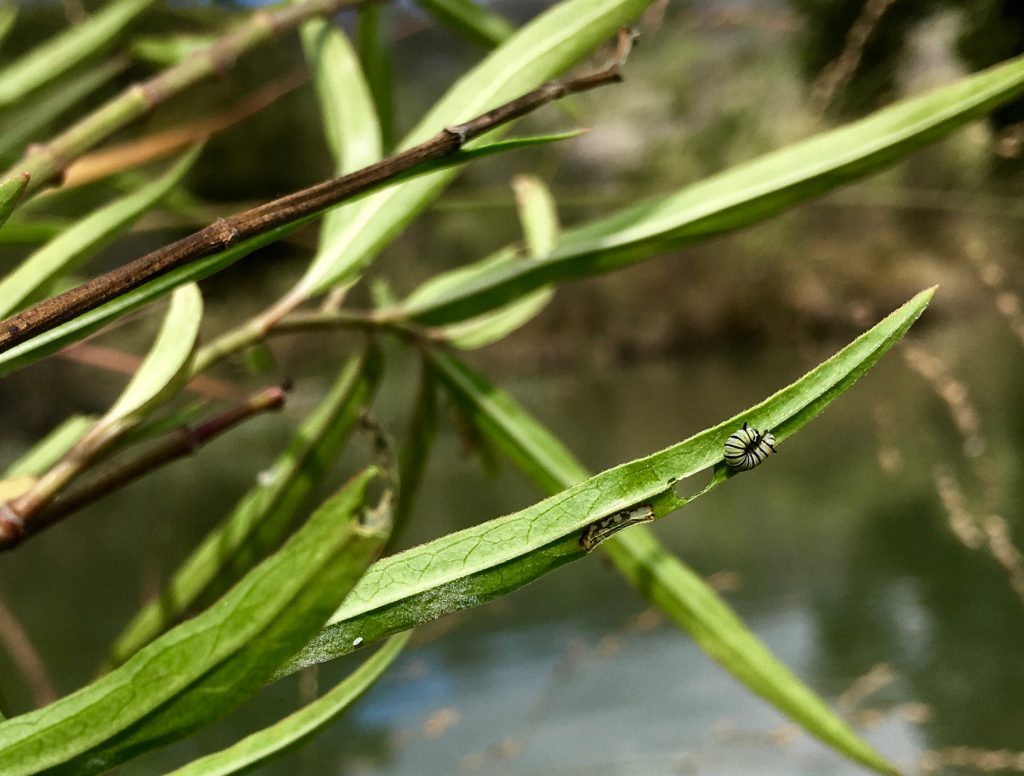 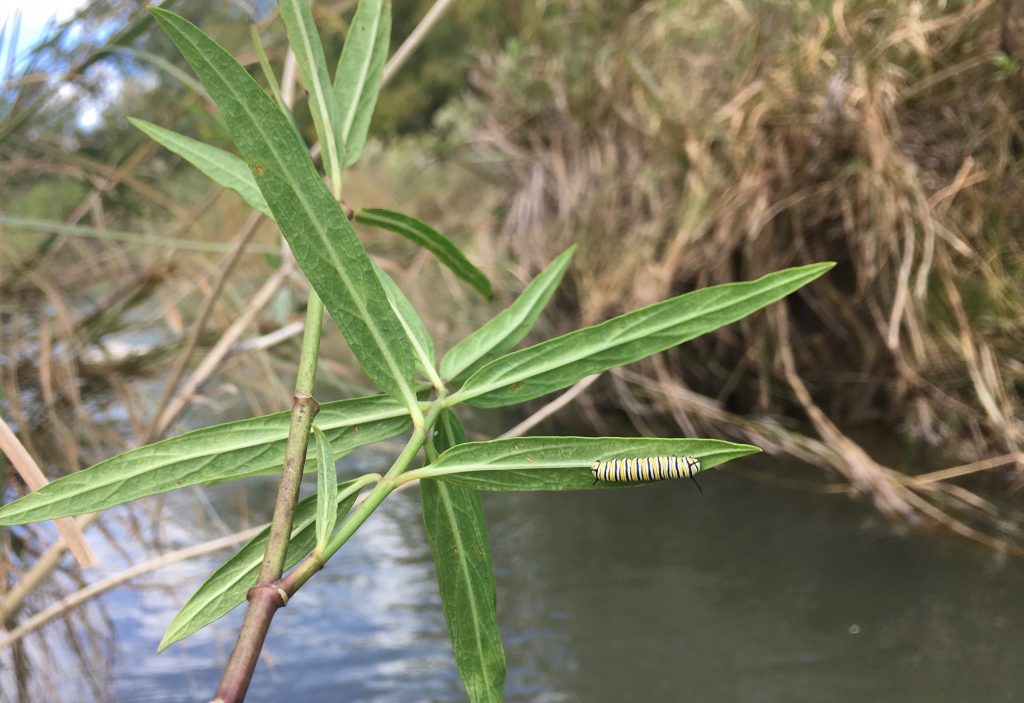 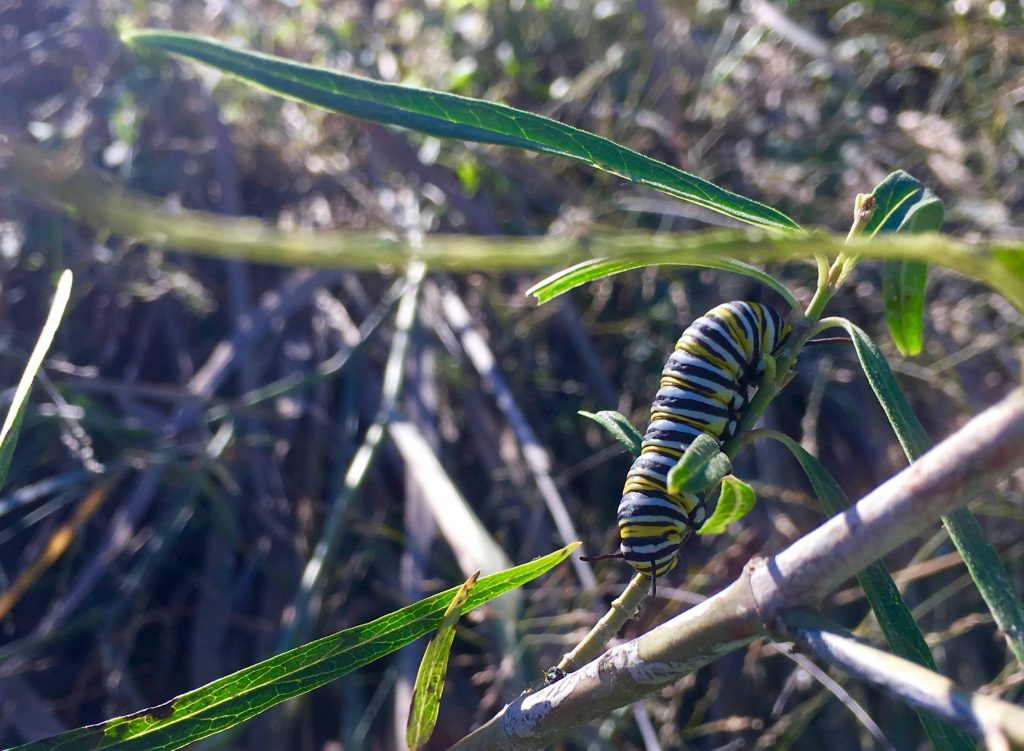 Here along the Llano, known as the “last wild river” in Texas, dozens of Monarch butterfly caterpillars in all stages of development —eggs, caterpillars and adult butterflies in migrating mode—supplied plenty of data for his study.
“I’d have to agree with Dr. Chip Taylor that the migration will be late and long this year,” said Berman. 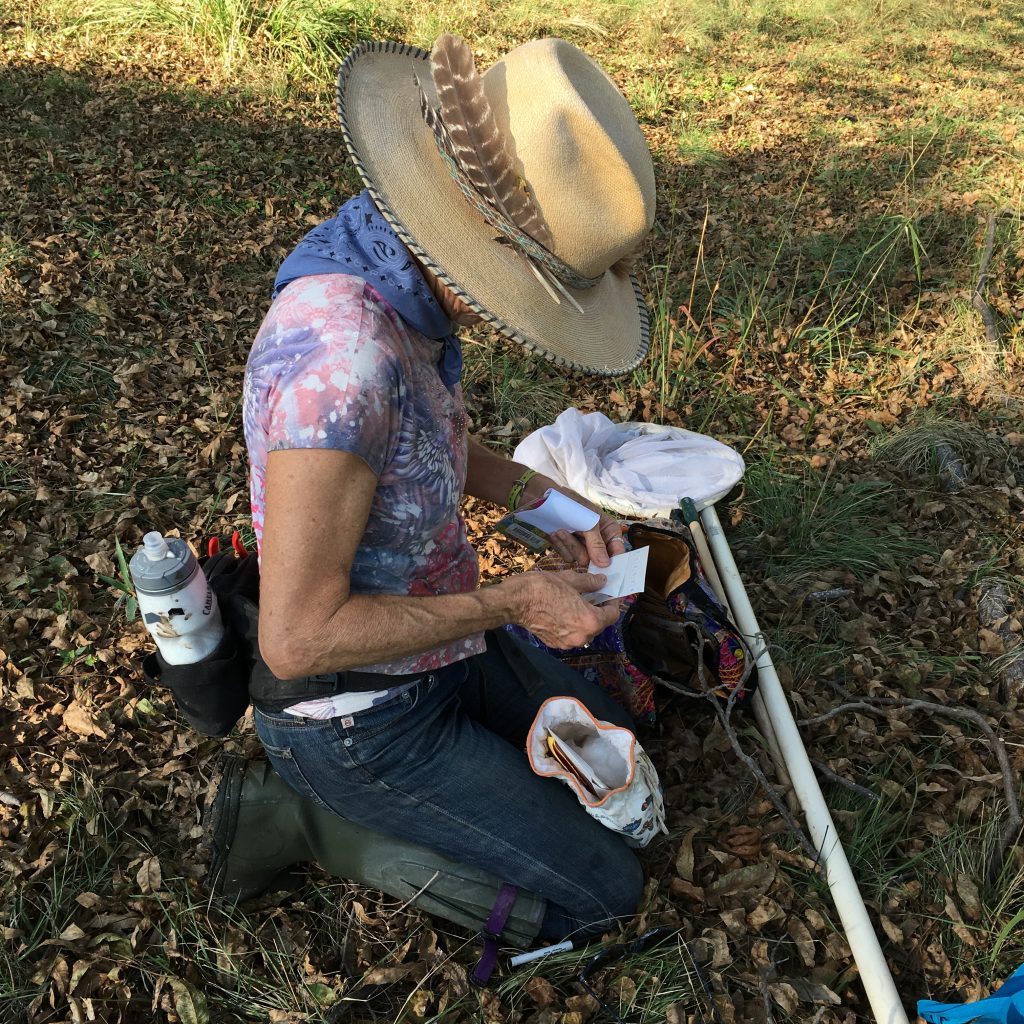 A small tagging team attempted to net the smaller-than-usual clusters of six-10 butterflies we usually encounter during peak Monarch season. 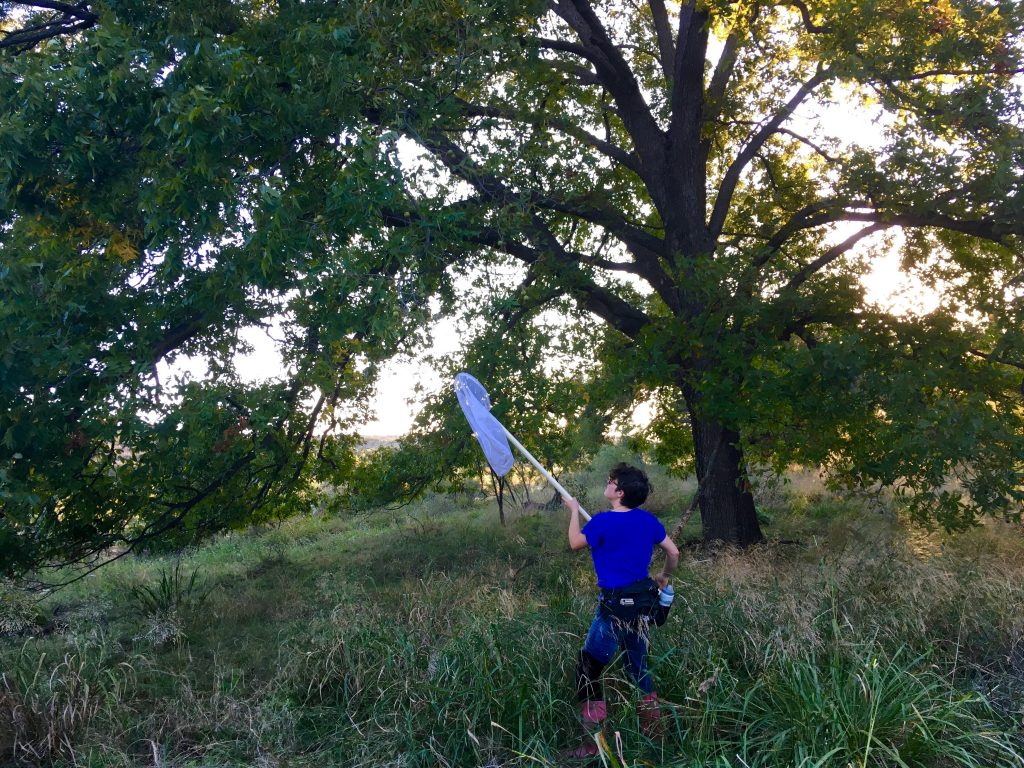 Victoria Echeverri of San Antonio takes her best shot at a cluster of Monarchs waiting out the wind on the Llano River. Photo by Monika Maeckle

High temperatures in the low nineties and winds out of the south gusting at 29 mph thwarted the butterflies directional flight south. They also seemed more skittish than usual, clinging to pecan limbs close to the limestone escarpment that provides a scenic backdrop to our river bottom.
Every time they left a pecan limb or cedar branch to continue their travels, a rush of wind would push them back. The wind made netting the creatures more challenging than usual,  as the slightest pivot of the Monarch’s wings or body would allow them to take a dramatic turn and avert our swoops.  A full day on the river only netted 58 tagged, compared to three times that many last year. 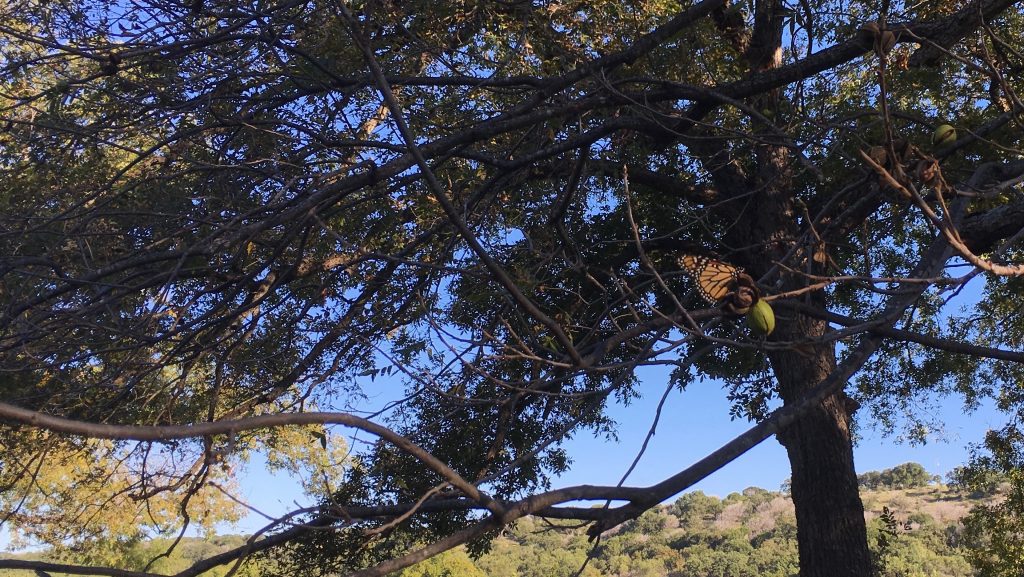 Pecan nuts made a convenient rest stop on the Llano River for migrating Monarch butterflies. Photo by Monika Maeckle

As the sun set on a mid October day that called for shorts and t-shirts instead of the usual jeans and long sleeves, we all wondered: is this the new normal? Rather than dramatic dense clusters of hundreds or thousands of butterflies roosting a few nights as in peak seasons past, maybe we’ll be seeing smaller groups over many weeks.
Related posts: