Officials in Mexico announced Wednesday that the population of migrating Monarch butterflies dropped 27% this season, marking a setback in two consecutive years of growth from the historic low of 2014. A freak sleet storm gets the blame. 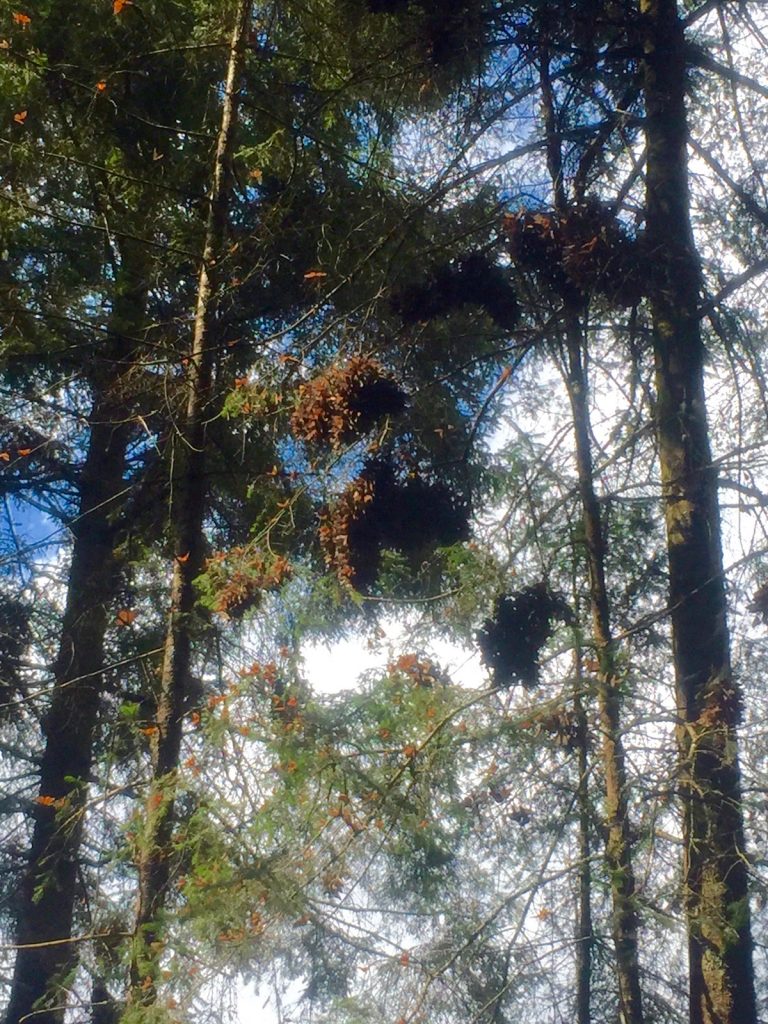 Our friend Regina Moya went to visit la familia in Valle del Bravo with a side trip to Piedra Herrada Sanctuary in the state of Mexico. PHoto by Regina Moya

Just last year, we celebrated a tripling of the population, a reassuring turn of events from the grim news of 2014 when the total migrating population of Monarch butterflies could fit into a single Wal-Mart store with 30,000 square feet to spare. That sad fact had butterflies occupying only .67 hectares (1.65 acres) of high elevation forest at their winter roosting grounds in Michoacán and the state of Mexico. The numbers grew in 2015 to 1.13 hectares (2.8 acres), then jumped in 2016 to 4.1 hectares (10 acres).
This year, the butterflies covered only 2.91 hectares (7.19 acres).

Scientists and others who follow Monarch butterflies were not surprised by the findings. Dr. Lincoln Brower said by phone that he thought the numbers would be even worse. Many of us noted fewer Monarch butterflies than usual. Ruth Bowell of Troy, Ohio, shared her thoughts on the 2016 season on the DPLEX-list, an email listserv that reaches about 800 scientists, citizen scientists and Monarch butterfly fans. “My numbers this year were dismal until late August when I started really seeing caterpillars…If they have a good winter, maybe we’ll see more returning than last year.” Dr. Cuauhtémoc Saenz Romero, who studies the forest where the Monarchs roost, expressed the same sentiment, remarking “That was due to the winter storm in March.”

The storm to which he refers quashed the optimism of February 2016’s dramatic population growth within a few weeks of its announcement when, on March 11, climate change dealt a deadly blow to the rebounded Monarch population. A freak freeze and sleet storm descended on Mexico’s Monarch Butterfly Biosphere Preserves, decimating 100 acres of Oyamel firs and killing an estimated 50 million butterflies. The tragedy occurred at a most vulnerable time. Typically the first and second week in March are when the Monarchs begin to flee the forest and head north for South Texas in search of milkweed on which to lay the first generation of eggs.

Those of us who live in the flyway hoped for a robust recovery over the course of the spring and summer breeding seasons. The weather cooperated, but apparently even good conditions–plenty of rain in the Texas Funnel, ample milkweed and nectar plants in the spring and fall–couldn’t make up for season’s cursed beginning.

Omar Vidal, head of the Mexico office of the World Wildlife Fund, told the Associated Press that the unusual winter storm likely played a role in the steep dip in Monarch numbers. “The reduction in the area of forest they occupied this year is most probably due to the high mortality caused by storms and cold weather last year,” he said. Here’s the full report, in Spanish.

Conservation efforts including pollinator habitat restoration and outreach continue, but it remains to be seen if that will be enough. Just today, the National Wildlife Federation, NWF met in San Antonio, the first Mayor’s Monarch Champion City, and finalized the completion of a citywide Monarch butterfly conservation plan. The document, assembled over several months and with the input of more than a dozen local organizations under the umbrella name Alamo Area Monarch Collaborative will lay out a comprehensive conservation and pollinator habitat restoration strategy. The effort will kick off and the plan shared at the upcoming San Antonio Monarch Butterfly Festival March 4 -5 at the San Antonio Zoo.

“During the meeting, the population count from Mexico was announced,” said Grace Barnett, Monarch Outreach Coordinator, South Central Regional Center for NWF. “It was read aloud–a strong reminder of  how important our work is and how much more there is to be done.”
Vidal underscored the work ahead when he told the Associated Press, “We cannot control the climate, but we can do much better in eradicating illegal logging in the reserve and tackling habitat loss in the U.S. and Canada,” Vidal said. “But, even if Mexico’s overwintering sites never lose another tree, without food and habitat along the migration routes, the forests will soon bid farewell” to the Monarchs.

Reports from the sanctuaries have been extremely upbeat, including one issued the same day as the declining population report. Journey North shared its first bulletin from roosting grounds correspondent Estella Romero, coupled with a note that tried to manage readers’ expectations with a prediction that numbers would be low this year. 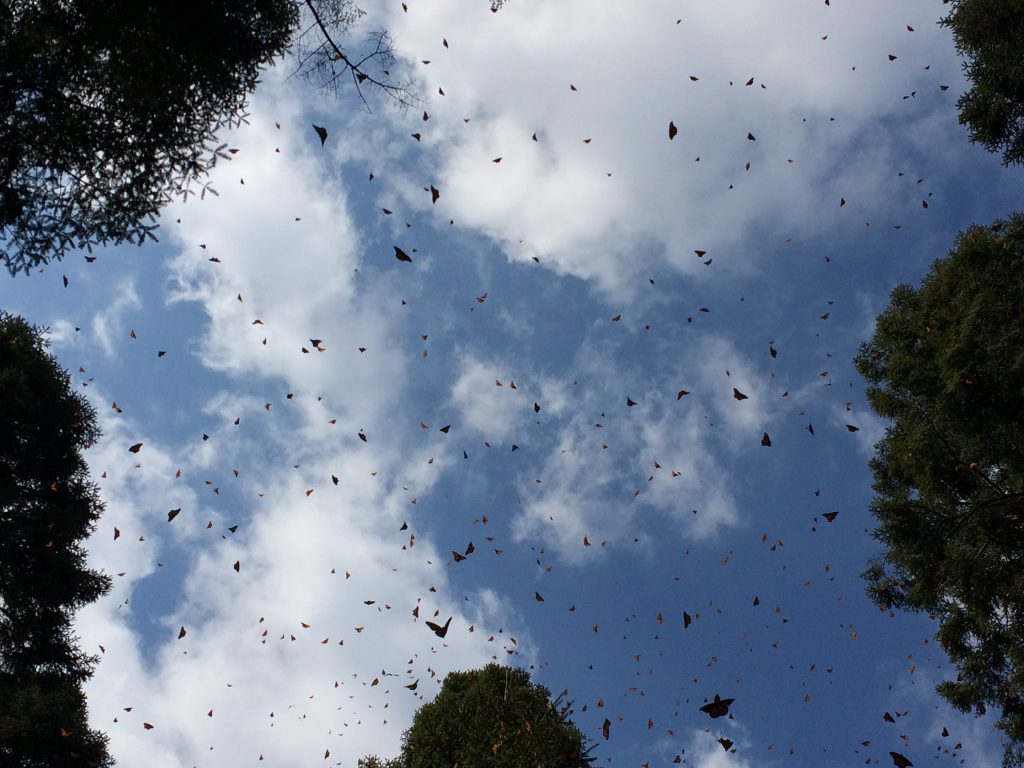 Estela Romero of Journey North visited the roosting sites last week and raved about what appeared to be high numbers. But the population actually slipped from last year. Photo via Journey North

Under the headline “Population News: Waiting for the Official Count” Elizabeth Howard, founder of the citizen science initiative that tracks the migrations of Monarchs and other species, warned that observations made throughout the year suggested “a small population has been predicted — perhaps as low as 1 hectare.”

But Romero was effusive in describing her recent visit to El Rosario and El Chincua sanctuaries on February 4, sharing a dispatch hailing their seemingly high numbers.
“As I got nearer to the core of the colony, I just could not believe my eyes! It seemed as if I was looking to one of the best spectacles of the last years, in terms of population….Tens and tens of trees were full with clusters – more than 50 trees covered– on top, by one side, by the middle, with heavy clusters or lighter clusters hanging…It was a wonderful spectacle,” wrote Romero.

Edith Smith, a commercial butterfly breeder and owner/founder of Shady Oak Butterfly Farm in Florida, expressed exasperation about the negative headlines in an email to the Association for Butterflies email list, a listserv for commercial and hobbyist butterfly breeders. “Am I the only one who wishes positive information about Monarch butterflies was shared at times?,” wrote Smith. “Numbers are down by 27 percent from last year. BUT they are UP from the year before….We’re up over four times the lowest we had. That is still GOOD news.”