Migrating monarch butterflies finally made it to the Mexican mountains last week–late, but intact.

For months, scientists and citizen scientists have been predicting the largest migration in a decade, but the insects have taken their time arriving at their winter roosting sites, missing their usual Day of the Dead arrival  by almost a week, according to reports. 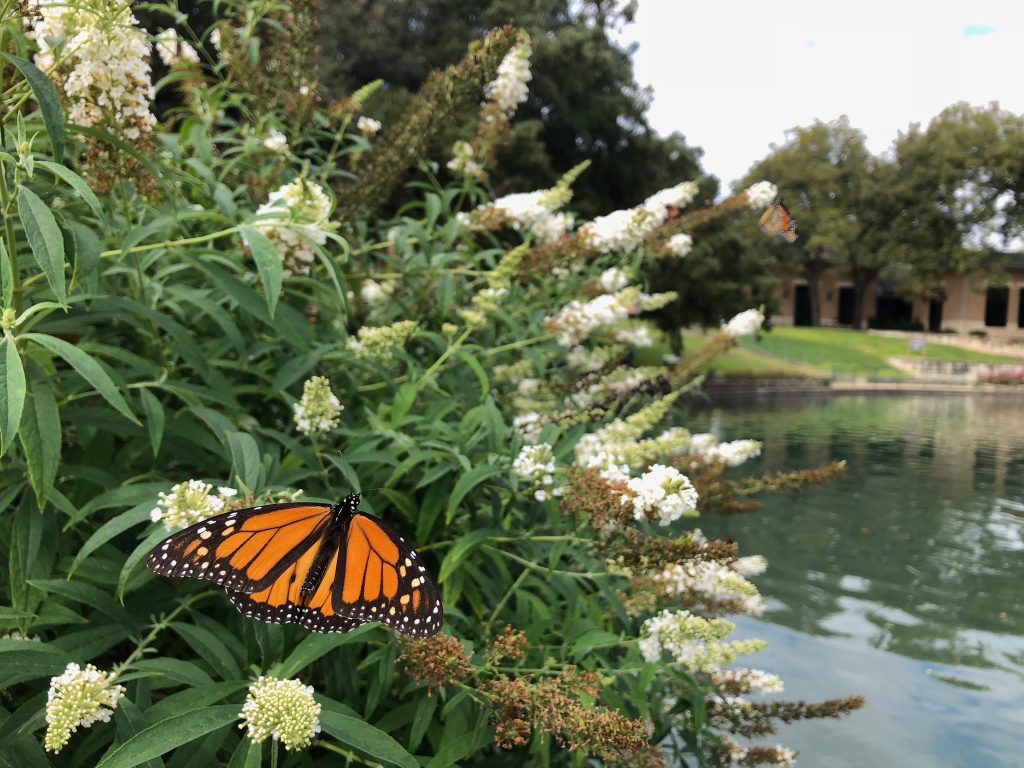 Mexico’s Natural Protected Areas Commission (CONANP) said in a statement that the first butterflies of the season were “crossing the sky” at Chincua and El Rosario sanctuaries in Michoacán, and at the Cerro Pelón and Piedra Herrada sanctuaries in México, on November 6.

CONANP said that with favorable weather, most butterflies should reach the sanctuaries during the next two weeks but wouldn’t settle in until the end of November.

Estela Romero, correspondent for Journey North, confirmed the first arrivals. “We saw the first yesterday–and today they are pouring in!” she wrote on November 7.

Ellen Sharp, of J&M Butterfly BnB at the entrance of the Cerro Pelón sanctuary, spotted first arrivals late last week. But the monarchs were a bit of a tease, she reported.

While several dozen were spotted flying high on one side of the mountain, not much action occurred at the entrance to the sanctuary. “We caught sight of one monarch at 3:53 pm. At 3:54 we spotted our second. At 4:01, the third. And then nothing,” wrote Clark.

In the Texas Funnel, the migratory channel through which all migrating monarch butterflies must pass on their way to the wintering grounds, the season has been late, unpredictable and dogged by stormy weather. Texas endured its rainiest fall in history. Much of it came in dramatic and destructive weather events, including a 40-foot rise along the Llano River where we usually tag monarchs each fall.

This male monarch took a beating when flooding and wind along the Llano River cut his trip short. Photo by Monika Maeckle

Four people lost their lives in the flooding near Junction, Texas, just upstream from the Texas Butterfly Ranch. RVs were submerged and 24 people went missing.

Clean up continues more than a month after the October 10 rain event, which was followed by even more wet weather. The deluge left fishing decks destroyed, kayaks gone missing, and riverbanks of late season nectar mowed to the ground during peak monarch migration season on our stretch of river. We found several monarch butterflies dead on the riverbank in a post-flood inspection. Well established pecan trees along the Llano where thousands of monarchs roost each fall now host batches of flood detritus. Even a 50-gallon drum of industrial glyphosate found its way onto our property. Hopefully, it was empty before it made its downstream trek.

“We had 24-36 hours of wind-driven rain with wind gusts as high as 59 mph that stripped all the leaves off many of the trees in my yard in one day,” said Louise Barteau of Buzzards Bay, Massachusetts, November 7, on the much followed DPLEX, an email listserv of butterfly scientists and citizen scientists who track the insects’ seasonal movements. “Did not expect to see monarchs again after that but have seen two since then.”

Another correspondent spotted a lone monarch in Chicago the same day.

We’ve been receiving numerous queries like this one from a reader in Belton, Texas, seeking advice on what to do with late season monarchs this fall: “I have several butterfly chrysalis on the side of my house. It looks like it may freeze. Should I remove them and take them in?”

The schizophrenic weather seemed to break the migration into disjointed parts in Central and South Texas. A big pulse of monarchs arrived  in mid October, followed by a break, then another rush around Halloween.

She returned to the area a week later and found no roosts, but a few monarchs moving through at a steady, daily pace, nectaring on Cowpen Daisy and late season blooms. “There was another big wave the next week but I wasn’t here. But over that week I tagged 300 during the day. All by myself. Slow and steady.”

Singleton said she was pleased to see a big migration after several slow years. “People in our small town who would not normally notice the monarchs found themselves standing outside looking at the skies with wonder and awe. Old and young were wishing them luck on their journey.”

Her favorite part? “Taking my 92-year old parents out tagging & watching them catch the fever just like a 10-year-old!”

Chip Taylor, founder of Monarch Watch, the citizen science tagging program based at the University of Kansas at Lawrence, says things are changing, but it’s still too early to declare a trend.

“Yes, this is another late migration relative to the arrival at the overwintering sites…November arrivals are unusual (6-7 Nov this year) but have happened in the past, most recently in 2014 when they arrived much later,” Taylor said via email. Rain and cool temperatures created on and off conditions for monarchs moving through much of Texas, he explained, followed by similar situations in northern Mexico.

Andy Davis, Assistant Research Scientist at the Odum School of Ecology at the The University of Georgia and editor of the journal, Animal Migration, thinks the trend is pretty clear.

Citing numerous studies indicating the impact of climate change on the monarch migration, Davis suggested we’re in for more seasons like 2018. Warmer weather will cause monarchs to breed later in the season and result in delayed or missed cues about when to start migrating.

“Either way, this means the monarchs will experience delays in reaching Mexico, or suffer greater mortality during the trip (because of the longer travel time),” he said via email. All of the research has been clear on this, he said, although no one expected it to be happening so soon. He added that given what happened last year, when a great summer population flourished, but had very poor migration success, he wouldn’t be surprised if that cycle repeated itself this year. “That right there might be the new normal.”

Only time will tell whether or not this year represents a new pattern for the monarch butterfly migration cycle.

Longtime monarch butterfly watcher Harlen Aschen, who snapped the photo of monarchs at the top of this post near Port Lavaca along the Texas coast on November 10, took the tardy season in stride. “We don’t consider these to be late for the Coastal Flyway,” Aschen said via email. “Monarchs that move along the bays and hug the coast really don’t get started until after Oct 20th….We will count until about Nov 21st.”