Rodrigo Medellín knows his bat guano. The renowned Mexican mammalogist, credited with saving the Tequila Bat from extinction, has slogged through caves shin-deep in bat poop more times than he can count.

Bat caves occupied by millions of bats are a “perfect place…a peaceful place,” Medellín says. He considers bats among his best friends, unfairly vilified and largely unappreciated thanks to pop culture portrayals of bats as bloodsucking vampires. 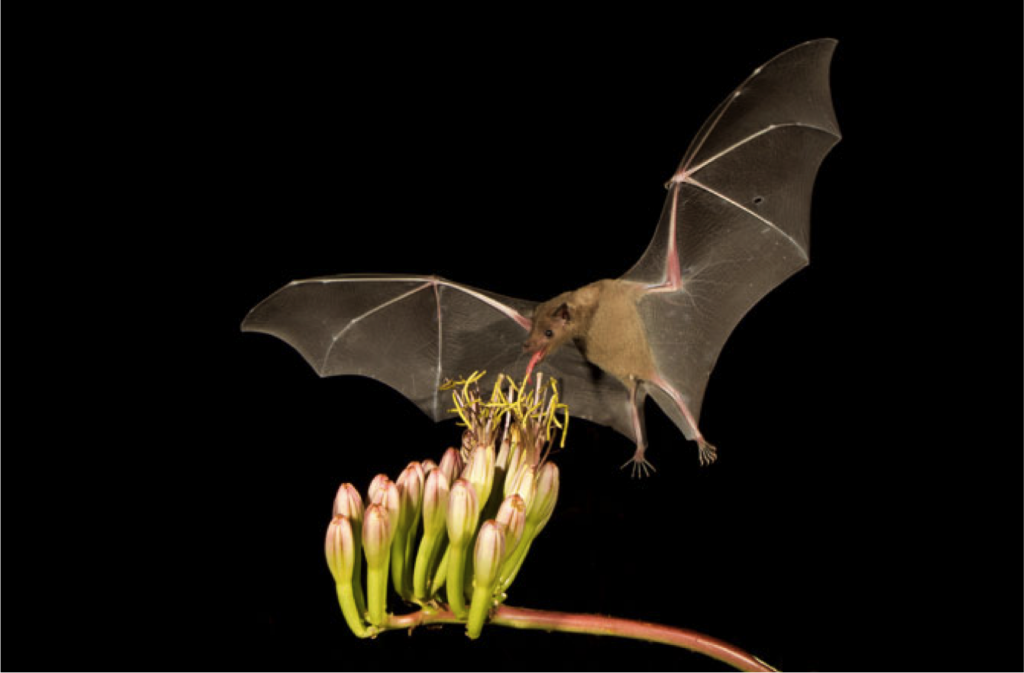 Lesser long nosed bat, a.k.a. the Tequila Bat, nectaring on agave. The bat was removed from the Endangered Species List in Mexico thanks to efforts led by Medellín. Photo by Roberta Olenick

Medellín, a senior professor of ecology at the Universidad Nacional Autonomy de Mexico (UNAM), will be in San Antonio October 18 -20 for the 2019 Monarch Butterfly and Pollinator Festival.

The hour-long documentary will be screened at UNAM at Hemisfair Park on Wednesday, October 16, at 7 PM.

San Antonio nature lovers will have two opportunities to meet the award-winning bat ambassador in person that same week. Medellín will participate in the Butterflies without Borders Forum on Friday, October 18 at Pearl Stable, for a panel discussion of wildlife migration and human immigration in a changing global and political climate.

On Saturday, October 19, Medellín will deliver a talk on the importance of bats in the ecosystem, accompanied by a mezcal/tequila tasting for  audience members, Holy Agave Spirits! It’s the Bat Man of Mexico. For those unaware, bats make tequila and mezcal happen by pollinating agave plants, the primary ingredient in the alcoholic beverages.

Medellin’s lifelong journey with bats began as a young boy. The born animal lover and youngest of five children said the first word he ever uttered was not “mama” or “papa,” but “flamingo.”

Medellín said in a recent interview that his mother was tired by the time he arrived. He was left in the care of his older sister, Enriqueta Medellín, a science lover who became a physician.

“She has been an incredible source of shaping an education for me, encouraging scIence interests and bringing microscopes to our house so I could see the wings of a fly,” he said. Medellín claims to have a bit of a skewed perspective on life, one with which he is entirely comfortable. “As a kid, every time I had a birthday, I always asked for animal books or to go see animals. That has been my life.”

Medellín’s path forward was confirmed at age 12, when he became the first child to appear on the nationally syndicated game show, “El Gran Premio de 64,000 Pesos,” a Mexican version of the TV quiz program, The $64,000 Question.

Producers were impressed with his knowledge of animal facts and quizzed him accordingly on live national television. Medellín earned 32,000 pesos and caught the attention of Dr. Bernardo Villa, the dean of Mexican Mammalogy at the UNAM in Mexico City. Villa called Medellín at home and invited him to come visit the university to see some real mammals.

Agaves like this only flower once and it takes years. Bats pollinate the species. Photo by Monika Maeckle

“It was a dream come true,” Medellín recalled later. “By the time I was 12, one of the professors put the first bat in my hands–a Big-Eared California Nose Leaf Bat. That sealed my fate, that is where I dwell, and that’s where I belong.”

Soon thereafter, the UNAM professors took Medellín to a bat cave where he was able to handle six different species of bats. That’s where he first came into contact with a Vampire Bat, the creature that has given bats their undeserved, reviled reputation. Medellín attributes the bad rap on bats to the 1897 release of Bram Stoker’s novel, “Dracula,” the gothic horror fantasy that stoked visions of vampires attacking humans and sucking their blood. Only three of the1,300 species of bats in the world survive on blood; the rest eat nectar, insects, birds and other wildlife.

Enchanted, Medellín asked if he could take some bats home. The professors assented–as long as it was okay with his parents. “But there were no cellphones back then,” said Medellín. So he brought two Vampire Bats home.

His parents indulged his fascination by allowing him to keep the bats in the family bathroom, where he fed the creatures blood from a nearby veterinary school– and sometimes, a little blood from his own veins.

“My mom, bless her heart, she was so supportive,” Medellín said. “I brought rattle snakes, scorpions, all kinds of creatures to the house.” He got in trouble when he stored a large snake in a pillowcase and the housekeeper found it.

In the 2015 BBC documentary, Medellín charms audiences with his plain-spoken enthusiasm for bats.

“This is my best friend,” he says with a big grin on his face, holding a Lesser Long-nosed Bat in his ungloved hands, checking its health. He revels at the male’s “big testicles,” noting the creature is “ready for action.” Rubbing a special gland on the bat’s back, Medellín notes that male bats use a combination of feces, urine and saliva as a sort of bat aphrodisiac to attract females. When the girl bats get a whiff of the special perfume, they “just fall in love with this guy,” he says in the film.

Medellín has won multiple awards for his bat and mammal activism-the Whitley Award, the Rolex Award for Enterprise, Mexico´s National Nature Conservation Award, and the VW Award for Love of the Planet. In addition to deep understanding of bats, he’s an expert on jaguars, ocelots and bighorn sheep. He teaches his students that in a country as biologically diverse as Mexico, specializing in the biology of a single species or a group of species is an unaffordable luxury.

Learn more about Medellín at these upcoming events:

Holy Agave Spirits! It’s the Bat Man of Mexico, Saturday, October 19, Confluence Park 6 – 8 PM Tickets $15
Medellín will present on bats in the ecosystem, specifically the role they play in making some of our favorite food and drink possible. Elizabeth Johnson of Pharm Table will share insights on food made from agave and Houston Eaves of the Esquire Bar will discuss bat-friendly tequila and mezcal. Food and mezcal/tequila tastings included in ticket price.