Thousands gathered at Pearl in San Antonio to close out the fourth annual Monarch Butterfly and Pollinator Festival on Sunday. The Festival, celebrating pollinators, plants, and the ecosystems that sustain us, featured more than a dozen events, including gardening workshops, movie screenings, an art show, a panel discussion and a presentation by “the Bat Man of Mexico.”

The week of festivities concluded in Pearl Park with a rousing interpretation of the Waggle Dance, a dance that bees do to communicate to each other where the nectar is flowing.

“How long they choose to waggle tells the other bees how far the nectar sources is from the hive,” said Bird. 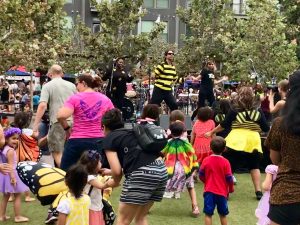 Garcia leads the crowd in the Waggle Dance. Click on the photo to see the action. Photo by Ashley Bird; Video by Giant Noise

Then Garcia launched into a raucous, booty shaking jiggle to the sound of Gloria Estefan’s “Conga.” Even a monarch butterfly got in on the action–check out this monarch enjoying the Waggle Dance, courtesy of Spectrum TV via Twitter.

An estimated 500 butterflies were tagged and released in one-on-one demonstrations of citizen science tagging. The exercise has volunteers tag butterflies with a tiny sticker, record if the butterfly is male or female, and submit that data for tracking to the University of Kansas at Lawrence’s Monarch Watch program. In the last three years, eight butterflies tagged at the Festival have been recovered on the forest floor in Mexico where the butterflies roost for the winter after making their marathon migration south from Canada.

“The smile on each child’s face when we share the magical moment of releasing the butterfly is definitely my favorite part,” said Drake White, Chief Festival Docent, who trained volunteers for the job of demonstrating the task and explaining the rationale for monarch tagging. “It’s hard to imagine these kids ever looking at butterflies the same way.” 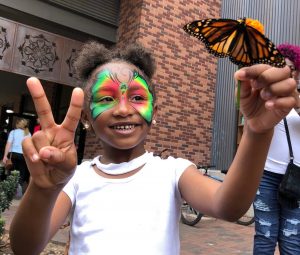 “Today I learned that they migrate from Canada to Mexico,“ Arelli, a fourth-grader told the Rivard Report. “They travel such a long way and they are so beautiful.” Read the Rivard Report’s Festival coverage here. 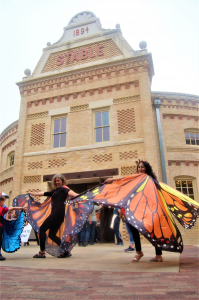 A People for Pollinators parade kicked off the Festival on Sunday. Photo by Eddie Gutierrez

“Asters and flowering plants were hot, and our large milkweed drew a crowd of people and monarchs,” said Grace Emery, president of the Bexar County Master Gardeners, adding that more than 200 children participated in a craft event.

Earlier in the week, San Antonio had the opportunity to participate in five pollinator gardening workshops, multiple movie screenings featuring bats and monarch butterflies, an insect art show and bug lunch, a climate change forum and presentation on bats and the ecosystem.

Butterflies without Borders, a Forum held at the Pearl Stable, included monarch butterfly expert and ecologist Dara Satterfield, National Public Radio’s border and immigration correspondent John Burnett, and Rodrigo Medellín, a Mexican mammalogist credited with saving the Tequila bat and known around the world as “the Bat Man of Mexico.” Rivard Report environmental reporter Brendan Gibbons led the discussion of how a changing climate effects human and wildlife migrations. Read full coverage of the Forum by the Rivard Report here.

On Saturday, at Holy Agave Spirits–it’s the Bat Man of Mexico!, Medellín explained to a crowd at Confluence Park why bats are important to the ecosystem. A mezcal tasting followed the presentation, since bats make tequila and mezcal possible by pollinating the flowers of the agave plant, the primary ingredient in the spirits.  Houston Eaves of the Esquire Bar and Elizabeth Johnson of Pharm Table provided the crowd with food and drink samples made possible by bats.

One of the most gratifying events of the week was Medellín’s visit to Lamar Elementary school for “Story Time with the Bat Man of Mexico.”

Sixth grade teacher Gabriela Santiago’s sixth graders were enthralled when Medellín shared tales of repelling into the mouths of volcanoes to inspect a remote bat cave, why he is terrified of cockroaches (his headlamp fell off and they started crawling all over him), and the time he found himself trapped in a cave surrounded by hundreds of brown recluse spiders.

Has he ever been bit by a bat? one child asked. “Thousands of times,” said the award winning ecologist.

“We are all scientists,” Medellín told the students at the end of his his one-hour visit. ”Never stop learning.”

Special thanks to our Sponsors!

AND VERY SPECIAL THANKS TO OUR EDUCATION PARTNERS!