The most important step we can take to combat climate change is to talk about it.

That’s the message of evangelical Christian and renowned climate change scientist Katharine Hayhoe in her new book, Saving Us: A Climate Scientist’s Case for Hope and Healing in a Divided World.

The director of Texas Tech University’s Climate Science Center and the chief scientist for The Nature Conservancy, the Canadian-born Hayhoe has been called one of the most effective communicators on climate change.

Her book, written with as much compassion as science, serves as a tutorial on navigating the deniers and skeptics, encouraging readers with hope found in our common human bonds. 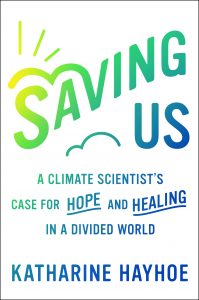 Hayhoe returns to San Antonio’s Monarch Butterfly and Pollinator Festival for a virtual appearance that will be streamed on a large screen at Legacy Park downtown on Thursday, October 7th. The event is FREE. Register here. This will be her second appearance at the Festival, which she graced in 2016 as a guest panelist with other scientists in the Festival’s inaugural year.

“I’m getting used to being hated,” Hayhoe begins in her book. “…But what am I supposed to do when I’m called a ‘climate ho’–somehow prove I’m not?”

Drawing on 15 years’ experience as a lecturer and presenter to groups ranging from the UN climate summit to universities, oil companies and churches, Hayhoe encourages us to trade our personal bubbles and tribalism for community and connection. The fear and denial result from a challenge to our identities, she argues.  Instead, she encourages conversations that will bridge gaps rather than widen them.

Those skeptical of organized religion might think Hayhoe’s evangelical bent could be misplaced in any conversation about climate change. I was prepared to be turned off by possible proselytizing by Hayhoe. But the exact opposite happened as I read the book.

Based on her vast personal experience with difficult conversations, she calls for us to bond, connect, inspire. Focus on shared values. We don’t have to agree on the science as long as we can agree on something that matters more–our children, our hobbies, a desire for less extreme weather, healthy and affordable food.

“Empathy is an antidote to righteousness,”she writes, while matter-of-factly pointing out that white evangelical Christians are less worried about climate change than any other group.

“Even when their objections are cloaked in religious sounding language, it’s not their theology that drives them,” writes Hayhoe. Instead, it’s the political polarization and tribalism that’s responsible for the partisanship of many U.S. Christians. “It’s those frames, not the Bible, that cause them to reject what science says about climate change.”

For Christians that contend “God is in control, so shouldn’t we just leave it in His hands?” Hayhoe counters that God never promised to rescue us from the results of our own bad decisions. Then she quotes the Book of Proverbs: “Whoever sows injustice will reap calamity…for they have sown the wind, and they shall reap the whirlwind.”

As the child of Christian missionaries, Hayhoe witnessed firsthand the ravages of poverty, such as the lack of good sewer systems and reliable electricity. She spent her formative years in Cali, Colombia. Given that history, she doesn’t hesitate to describe the injustice and havoc climate change heaps on the poor.

One Stanford University study she cites estimates that climate change has already increased the economic gap between the world’s richest and poorest countries by as much as 25 percent. Climate change has also negated more than 50 years of advances in poverty and hunger reduction and could push 120 million more into poverty by 2030, she writes. “If Christians are truly pro life from conception to death (rather than from conception to birth, as some people’s attitudes seem to suggest), they should be leading the charge to get rid of fossil fuels,” she writes.

While Hayhoe comes down hard on oil companies and the excesses of consumerism, she makes the case that together, we can make a difference.

She encourages us to not travel promiscuously. Don’t waste food. Wash your clothes in cold water. Eat less meat and buy local. Use your voice to advocate for change within your sphere of influence. In Hayhoe’s view, we can turn the tide on climate change if we embrace personal efficacy and self belief in our own capabilities to organize and execute a course of action. And the first step in that direction is talking about it.