As San Antonio and the Texas Hill Country approach peak monarch butterfly migration season October 10 – 22, the forecast for this year’s crop of iconic orange-and-black insects does not look great.

A hard freeze in Texas this spring followed by months of drought and record 100-degree days has set the stage for a challenging year.

“Not a great year for pollinators in general, I’d say,” said Molly Keck, entomologist for the Texas Agrilife Extension Service in Bexar County.

The freeze hit Texas in March, stopping many of the milkweeds that typically sprout in spring in their tracks. Milkweed is the only plant on which monarchs lay their eggs. As a result, the monarchs returning from Mexico this spring found no host plant on which to lay the eggs of 2022’s first generation of monarchs and continued flying. Many perished along the way. 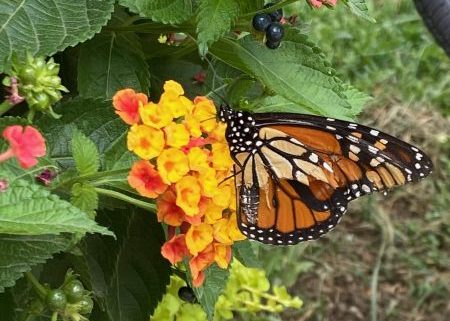 This tattered monarch on lantana was spotted in Lawrence, Kansas, this week. Photo by Monika Maecklexico had no host plant on which to lay 2022’s first generation of eggs. They continued flying north, often perishing along the way.

Then came the drought.

Keck said the lack of rain has resulted in little nectar availability in many parts of Texas.

While laying eggs on milkweed and reproducing is their priority in the spring and summer, in the fall, monarchs’ agenda is to load up on nectar. Autumn is when they migrate back through what’s known as the “Texas Funnel” en route to their roosting sites in Mexico. The insects are programmed to build up their fat stores, which allows them to make it through the winter.

“Some people’s gardens are finally blooming if they planted the right things,” said Keck, referring to the welcome rains central Texas experienced several weeks ago. The downpour in August was the first significant rain in the area since last September. “It’s been a brown and not very green this year,” she said.

While Texas is just approaching peak monarch migration, the season is winding down up north.

Don Davis of Toronto, an avid monarch butterfly follower who has been tracking and tagging monarchs for decades, said via email that the butterflies were uncommon in his area until about mid August, when the migration became more noticeable.

“We were plagued by hot dry weather, and the lack of rain hindered monarch reproduction. Some rains arrived about mid August, but we still need more,” he said. 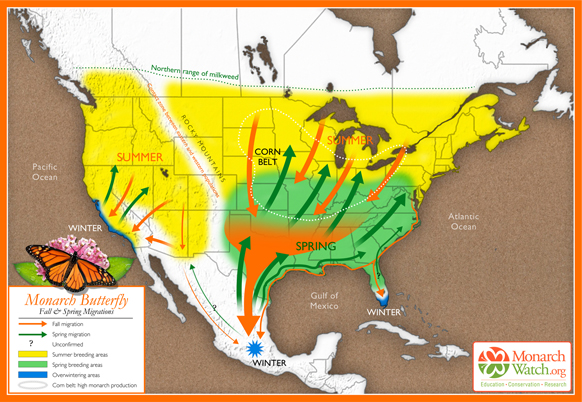 Monarch butterflies start their mulit-generation migration in Mexico in the spring, move north over the summer, and return south in the fall. –Map via Monarch Watch

Davis said a cold front pushed monarchs south last week and he and others reported  significant roosts in Southern Ontario. Ultimately though, he anticipates a smaller population this year.

“I suspect that monarch numbers will be lower in Mexico,” he said. “I am concerned by the very hot and dry conditions the monarchs will migrate through in the southern U.S.A., and Texas in particular.”

Dry conditions take a huge toll on the migrating creatures. Cooler weather allows them to burn fewer calories and maintain their lipids–the fats they use to get through the winter. Hot weather does the opposite, forcing energy use.

Join us in October for the Monarch Butterfly and Pollinator Festival at Brackenridge Park.

Cathy Downs, a conservation specialist for Monarch Watch, the University of Kansas monarch butterfly citizen science tagging and conservation program, is more optimistic. Based outside San Antonio in Comfort, Texas, Downs said she’s seen about a dozen monarchs and heard reports of more in the Texas Hill Country.

“It seems slow to start again with northern temps cool at night but still warm during the day,” she said.

Downs credited 4 1/2 “ of recent rains for rejuvenating some of the native flowering plants in her area.

“Let’s hope we have a little more rain to sustain favorable conditions until they begin migrating in earnest,” she said.

Monarch Watch founder, Chip Taylor, was less hopeful.”This is going to be a low migration, that’s all we know,” he said. “By a significant amount.”