What a difference five inches of rain makes.

The Llano River in the Texas Hill Country is known for exhibiting drama, running at a trickle during times of drought, then surging to flood stages that cause massive damage. This summer has been no exception. From running almost dry in parts in August to rushing strong in September, the mighty Llano has shown its resilience as grasses, forbes, wildflowers and butterflies have returned after a week of solid rain that followed months of drought.

That’s not to say that the dry spell is behind us. Five months of 100-degree days starting in May coupled with ZERO measurable rain since last September provoked flashbacks of the historic drought of 2011, which resulted in some of the lowest numbers ever recorded for the migrating monarch butterfly population. 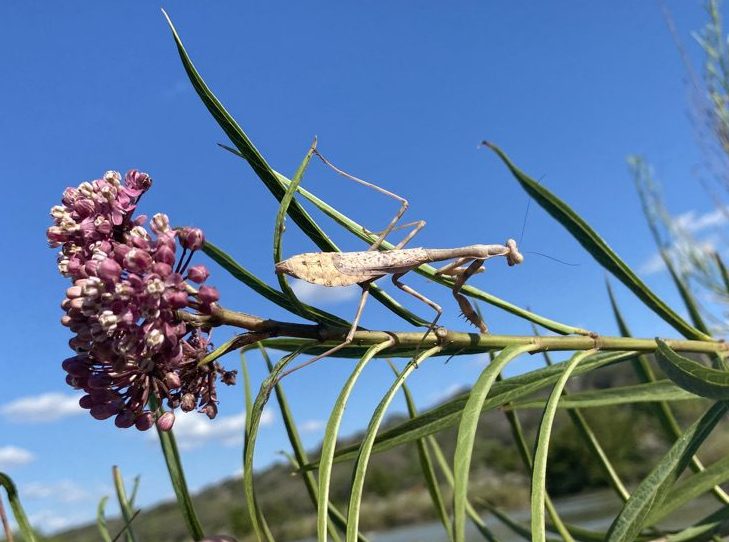 The Texas Hill Country in 2022 flaunted a spring season that resembled autumn. Landscapes were brown, not green, and insects were few and far between. A harsh freeze led into a serious dry spell that cramped the landscape’s style, crippling wildflowers, drying up streams, and generally straining the ecosystem. But a slew of recent thunderstorms has demonstrated the Llano’s resilience. The river is back, and so are the grasses, flowers, and insects–including butterflies.

River and streambeds are a favorite roosting spot for migrating monarchs’ each fall. The riparian contexts provide shade, trees for roosting, water, and nectar sources. In the Texas Funnel in the late summer and fall, riverbeds are often the only places where flowers bloom, which makes them a popular rest stop for migrating monarchs.

While the recent storms provide a break from the dry and the heat, 2022’s harsh weather has exacted a steep price. Swamp milkweed, Asclepias incarnata, which struts its blooms each Labor Day, appeared strained this weekend, the usual pink umbels exhibiting a more reddish, dehydrated hue. Aphids, milkweed bugs, ladybugs and praying mantises riddled the plants, on which monarchs arriving in late summer often lay their eggs. Those eggs typically hatch in time to join the great migration in mid-October.

Many of the Swamp milkweeds observed this weekend had been abused by the rising waters precipitated by the dramatic rain and river rise. Their leaves, caked in mud and other river solvents, posed an unappealing place for monarch moms to lay their eggs.

Goldenrod, late flowering boneset, purple leather flower and other seasonal bloomers showed their colors, but not in the usual numbers seen most Labor Day weekends. One monarch was spotted flitting along the river. Three caterpillars and one egg were observed on dozens of milkweed stands.

How robust this year’s monarch migration will be remains to be seen.