Day of the Dead/Dia de los Muertos has come and gone, but numerous sightings of monarch butterflies continue in and around San Antonio and the Texas Hill Country.

Typically the iconic orange-and-black creatures migrate through what’s known as the “Texas Funnel” in mid-to-late October, completing their annual multi-generation migration in Mexico by the first few days of November in time for celebrated Mexican holiday that honors those who have died. But this year the migration appears extended.

East of the Rocky Mountains where the monarch population migrates to Mexico, numbers have been strong all season. And in central and south Texas monarchs continue to move south into mid November–especially along rivers or in landscapes where late season flowers offer nectar for fueling the butterflies’ long flight to their winter roosting sites in Mexico.

“It is again long and late,” said Cathy Downs of Comfort, Texas.

Downs has witnessed many monarch seasons in her time as a monarch butterfly conservation specialist for citizen science organization Monarch Watch, which tracks the butterflies’ migration each fall. Throughout October she’s witnessed dozens of monarch butterflies at local parks in Kendall County, where peak monarch migration occurs in mid-late October.

But then on October 30, Downs was alerted that an estimated 1,200 monarch butterflies were roosting in Burnet, Texas, in the middle of a group of homes near Lake Buchanan.

“I was surprised by the size of the roost,” said Downs, adding that she traveled to Burnet to help tag the butterflies, but they dispersed quickly. Warm temperatures in the northeast this fall appear to be holding large numbers of monarchs back. 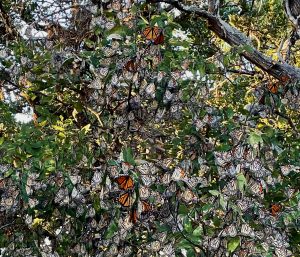 This roost of an estimated 1,200 monarch butterflies was photographed on Oct. 29 in Burnet, Texas, near Lake Buchanan. Credit: Courtesy of Jack Marshall

Juan Guerra, senior horticulturist for the City of San Antonio, said he’s noticed a difference in the migration this year.

“Monarchs came more in waves since late July rather than a mass migration in the fall and you can still see them today feeding from our nectar plants in our River Walk pollinator gardens,” he said.

This late presence of monarch butterflies is not just happening in Texas.

Don Davis, a long time monarch butterfly follower in Ontario, Canada, where the multi-generation autumn migration begins, reported via the DPLEX, an email list for monarch butterfly enthusiasts, that monarchs were spotted in Point Pelee, Ontario, on November 8.

“These sightings are uncommon,” said Davis.  “Most regions of Ontario have now had their first frosts, but a few monarchs seem to survive overnight, possibly finding a sheltered spot or microhabitat in which they survive.”

Out on the West Coast, where a separate population of monarch butterflies migrates up and down the California coastline, the news has also been upbeat. Numbers of the iconic creatures plummeted to near extinction last year, to less than 2,000. But now the insects have rebounded handsomely–despite drought, wildfires and the recent cyclone bomb storm.

“It’s a hopeful sign that we are seeing better numbers and the migration is definitely not gone, as some feared after last year,” said Emma Pelton of the Portland, Oregon-based Xerces Society, an invertebrate conservation protection organization that filed a petition to have monarch butterflies listed as “threatened” under the Endangered Species Act in 2015. US Fish and Wildlife Service denied that status last December, but ruled threatened status was “warranted but precluded,” and will revisit the issue in the future.

Even though the recent uptick is good news, Pelton said it does not constitute a population recovery. “If this was four years ago, we would actually be quite concerned with how low the numbers are. It’s really important not to get used to a new baseline and forget that we had hundreds of thousands of monarchs in the 2000s and 2010s and over a million monarchs in the 20th century.”

Karen Oberhauser, founder of monarch butterfly citizen science organization Monarch Joint Venture and professor at the University of Wisconsin-Madison, said she’s cautiously optimistic about the good news from monitoring summer breeding activity and anecdotal reports of high numbers seen during the fall migration. “I hope…it translates into good numbers in Mexico,” she said. She added that the news from California is “incredibly exciting.” 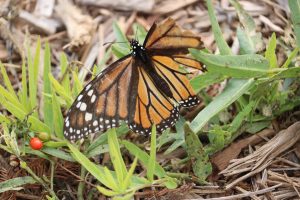 Chip Taylor, founder of Monarch Watch, was less enthusiastic, and suggested that the eastern monarch migration population will decline this year.

Scientists like David James, an entomologist at Washington State University who studies the California population, sees a hopeful future of mixed monarch populations. As the climate continues to warm, some will migrate, and others will stay put. “The proportion and population sizes of these will shift annually according to temperatures particularly during Sept-Oct,” he said.

Another reason for optimism on the monarch butterfly front: the recently passed infrastructure bill, which awaits President Biden’s signature, includes the  Monarch and Pollinator Highway Act of 2021.

The Act will provide for $2 million annually from 2022-2028 for grants available to states, Indian tribes, and federal land management agencies. The Act specifies grants will be awarded to carry out pollinator-friendly practices on roadsides and highway rights-of-way, including the planting and seeding of native, locally-appropriate grasses, wildflowers, and milkweed.