An estimated 2,500 people gathered to celebrate the sixth annual Monarch Butterfly and Pollinator Festival  at Confluence Park in San Antonio last Saturday. The Festival moved to the park this year and the reaction and turnout were overwhelmingly positive.

According to Frates Seeligson, executive director of the San Antonio River Foundation which oversees the park and served as title sponsor of the Festival, the event marked the largest gathering ever at the awarding winning facility.

The perfect fall day kicked off with a People for Pollinators procession led by musician/host Adam Tutor, as children of all ages “got their wings on” and marched around the park perimeter. A blessing by  members of the Aboriginal Tap Pilam Coahuiltecan Nation followed, with myriad educational activities staged by 40+ educational partners.

An art show by local artists featured pollinator art in the Estela Avery Education Center and a Waggle Dance and bee swarm performance staged by Mau Garcia and Compost Queen Bees  entertained the crowd from the main stage.

Around the park, monarch butterfly tagging stations staffed by Master Naturalists trained in the techniques of citizen science managed hundreds of one-on-one tagging demonstrations, with more than 550 butterflies tagged.

“This was the best Festival yet,” said Drake White, of the Nectar Bar.

White has served as chief docent for the Festival since its inception, overseeing the popular monarch tagging demonstrations that highlight the event. “It gave such a feeling of belonging. The park belonged, the people belonged, the butterflies belonged, nature belonged.” 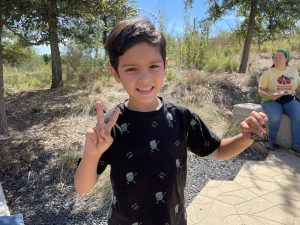 Docents worked with children of all ages to record each butterfly’s sex and tag number, which are then sent to citizen science organization Monarch Watch, at the University of Kansas at Lawrence.

The Festival also invited volunteers to tag the butterfly in honor of someone who died, as they took flight on their Forever Journey to Mexico. The creatures migrate each fall to a high altitude forest west of Mexico City where they overwinter. The butterflies typically arrive there the first week in November in time for Day of the Dead/Dia de los Muertos.

“I had no expectations whatsoever but was delighted to see so many people are in to nature, butterflies and pollinator plants,” said first time Festival-goer Ron Roy of San Antonio.

Roy, who had never been to Confluence Park but recently planted a butterfly garden at his Monte Vista home, said he was most taken with the tagging of the butterflies. Watching the monarchs fly off to their next destination  “was awesome, amazing,” he said.

Lisa Marie Barocas, San Antonio River Foundation board member and  veteran monarch tagger who has attended the event for years, said she was pleased to see the Festival find a new home.

“It brought out people who didn’t even know Confluence Park existed,” she said. As a bonus, “the butterflies had lots of yummy food to grab as a snack before they made their way to Mexico,” since the park is landscaped with native nectar and host plants, she added.

The Saturday Festival headlined the month long celebration of pollinators in San Antonio, which sits in the heart of the Texas Funnel, a migratory flyway through which monarch butterflies and other migrating creatures pass each autumn.

More than a dozen webinars, live events, movies and meetings fleshed out the Festival calendar, which included a virtual visit from rock star climate change scientist Katharine Hayhoe, the distribution of 85+ “caterpillar condos” by Festival manager Ashley Bird of Blooming with Birdie, and the sharing of thousands of native seed packets underwritten by sponsors.

The Festival’s closing event occurs next Thursday, October 27,  Cocktails & Culture: Pollinators at the Witte an evening that explores how pollinators make much of our food and drink possible.

This year’s Festival presented many learning opportunities to all who attended and for those who put it together.