We’re hearing positive reports from further north about the Monarch butterfly migration. Masses of Monarchs look to be in the Midwest right now, according to dispatches from the DPLEX list, the Monarch butterfly listserv that reaches hundreds of butterfly enthusiasts, citizen scientists, academics and others.

“It was obvious that the crest of the migration was passing through Omaha today,” Dr. Ted Burke, an entomologist and behavioral biologist at Creighton University wrote on Sunday. Dr. Chip Taylor, founder of Monarch Watch, clarified that the ”crest” is actually the “leading edge” of the migration which should be followed by the peak six – eight days later.

“The numbers observed were incredible….At one prairie I counted 79…At the other prairie, I counted 150!” Burke wrote, adding that last year the numbers at the same locations were eight and twelve, respectively. 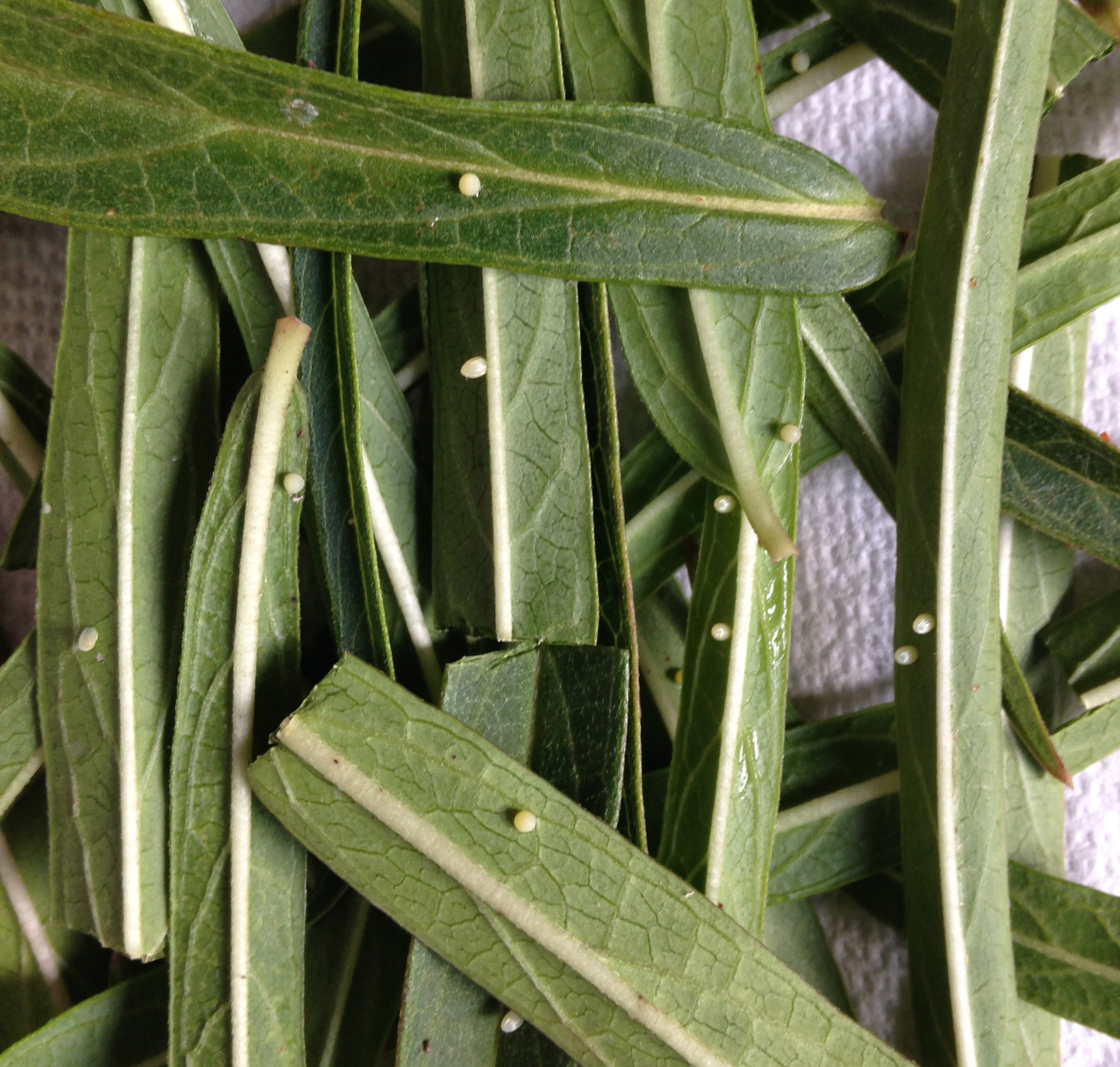 Musta been a wild weekend on the Llano River in the Texas Hill Country: 77 eggs gathered from Swamp milkweed. Photo by Monika Maeckle

About 850 miles south of Omaha, a dramatic cold front that began in Canada pushed 20-mile winds out of the north and dropped temperatures from the 90s to the 50s. The front blew some early migrants into the “Texas Funnel” along the Llano River this weekend. Judging from the dozens of eggs observed and collected on Sunday, it must have been a wild Saturday night in the Texas Hill Country.
Early migrants broke their reproductive diapause to drop their small yellow pearls on the undersides of Swamp milkweed, Asclepias incarnata, leaves.   In my eight years of tagging and monitoring, I have never seen so many eggs.   I stopped gathering after 77, wondering where I would find enough milkweed to feed the resulting hungry caterpillars.  Note to my San Antonio area friends:  you’ll be hearing from me regarding milkweed loans. 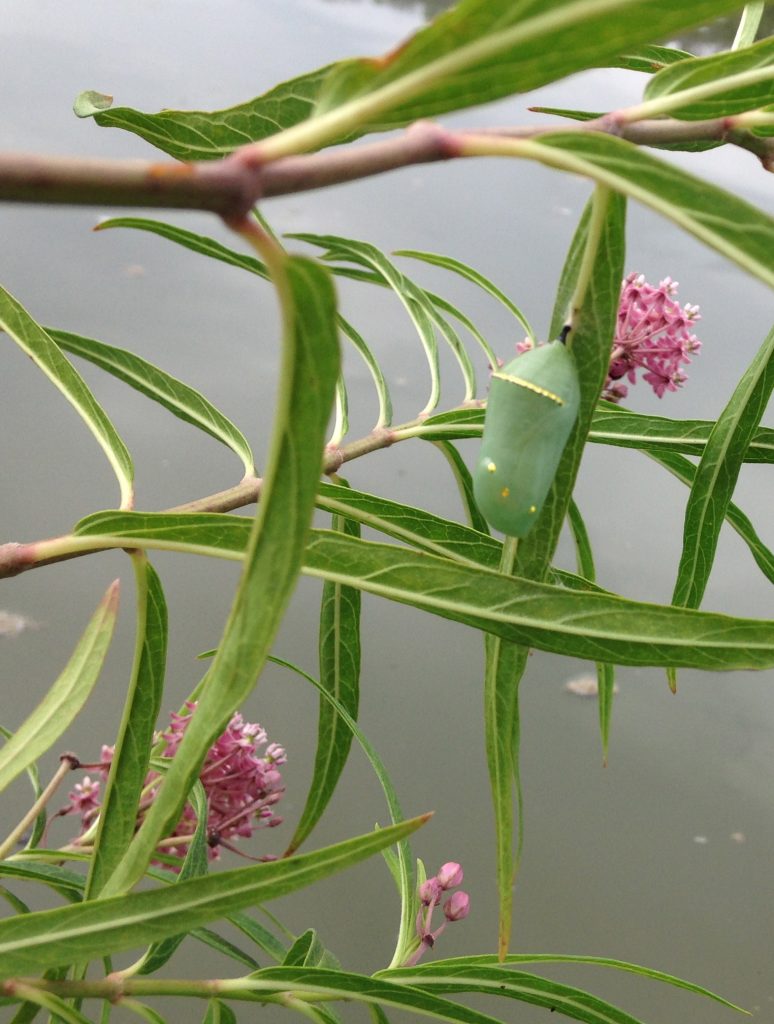 Another first: perfect chrysalis found on Swamp milkweed on the Llano. Photo by Monika Maeckle

Another first: I found a fully formed Monarch chrysalis dangling from milkweed leaves over the river.
Two caterpillars and about half a dozen adult Monarchs also made an appearance, presenting the entire life cycle in a two-hour kayaking tour. With tags in the boat, I only took one swing with my net all afternoon.  I missed.  She was probably an egg-laying female anyway, so unlikely to migrate. See our recent story on the premigration migration.
Our friend Veronica Prida reported a FOS (First of Season) migrant Monarch in her front yard in Alamo Heights on Saturday.   The faded female nectared on dramatic Pride of Barbados while Veronica snapped photos.  Upon returning Monday, we also had a female laying eggs in our downtown garden on Swamp milked transplanted from the Llano. 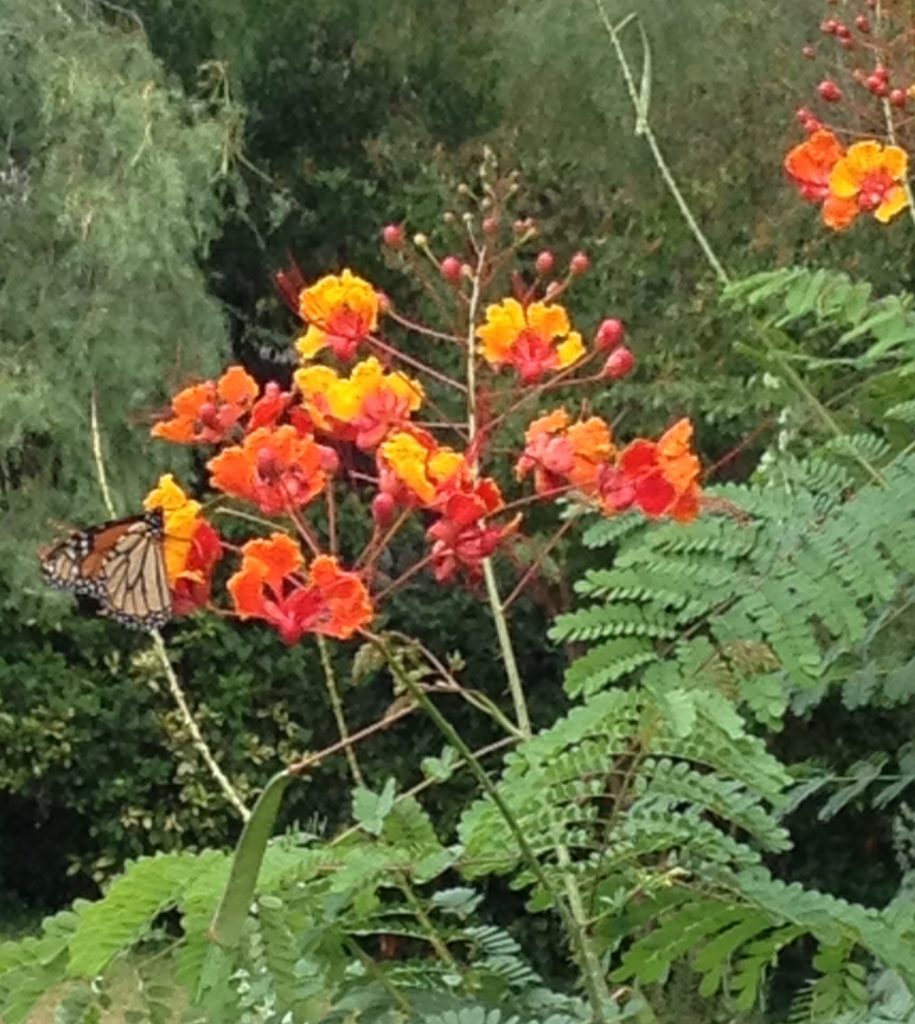 This faded female showed up in San Antonio on Saturday, September 13 to nectar on Pride of Barbados. Photo by Veronica Prida

All this bodes well for the migration. The 77 harvested eggs will take about one month to become butterflies, hatching just in time for peak migration in our latitude, October 10 – 22. They’ll be tagged, released and join the migration.  We promise to fatten them up with ample nectar from our gardens, sending them on to Michoacán with massive healthy fat deposits to see them through the winter.
Ideal conditions prevail here with Goldenrod, Frostweed, Swamp Milkweed and other fall flowers still in bloom, and almost tropical weather in place.  Meteorologists predict a “mild El Nińo” pattern this fall, translating to more rain.  How sweetly ironic and preferable to last year’s dreary reports of drought and decline.