MOTH-ers and “mo-fos” (that is, moth followers) showed up by the hundreds Saturday night for Malt, Hops, and Moths:  Moth Night at the Alamo Brewery.  More than 250 attended the gathering, which ranked as the first official National Moth Week event ever staged in San Antonio.  The occasion put the Alamo City on the Moth Week map with 373 similar events staged in 38 countries around the world July 18 – 26. 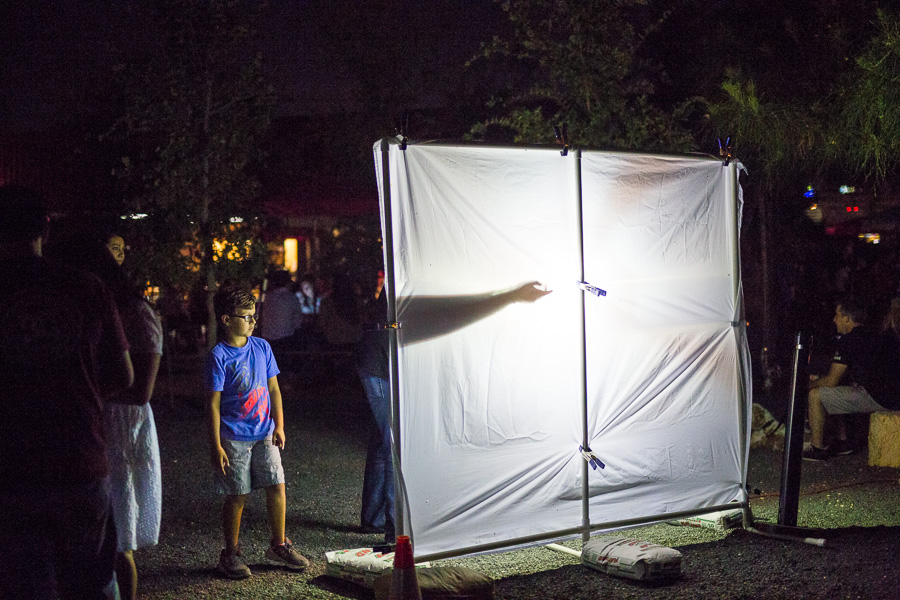 Lots of MOTH-ers, not so many moths at the moth sheet at Alamo Brewery for the first official Moth Night San Antonio in honor of National Moth Week. Photo by Scott Ball, Rivard Report

While several interesting moth species made appearances, including the Texas Grey Moth,  moths, in all their biodiversity, largely avoided the venue. Extreme heat, high winds, and possibly too much urban light may have deterred their participation.
But no matter. Turns out MOTH-ers really like their beer.
Alamo Brewery had a banner night, ringing up substantial beer sales–mostly in a special edition Moth Night brew, Sphinx Moth Amber Ale. Partial proceeds of those sales, more than $1,000, will go to Friends of San Antonio Natural Areas, FoSANA, formerly known as the Friends of Friedrich Wilderness Park. The nonprofit organization serves as a steward and advocate for local urban wildlife spaces and promotes education and science to increase public understanding of nature. 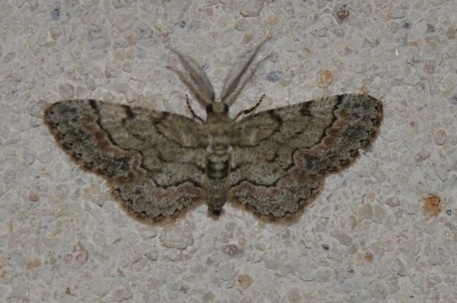 Texas Gray Moth, Glenoides texanaria, was one of the few moths to join the party at Moth Night at the Alamo Brewery. We still had fun. Photo by Delmar Cain

“The great turnout affirms the San Antonio community’s desire to disengage from their screens and check out what our urban nature has to offer,” said Daniel Large, a board member of FoSANA and co-organizer of the event.  “We look forward to more events in the future.”
Eugene Simor, founder of Alamo Beer Company, agreed.  “It was one of our more unusual and successful events, and well worth the effort,” he said.

Three moth sheets were set up with mercury vapor and black lights in the Brewery’s massive yard as curious onlookers gaped from the Hayes Street Bridge, which remained completely dark this steamy summer evening by prior arrangement with the City of San Antonio.  Volunteers helped kids mix up moth bait–ripe bananas, Alamo beer, yeast and molasses. Kids and moth docents smeared the concoction on logs and trees in an attempt to attract the night flyers. Moths didn’t take much of the bait, but no one seemed to mind. A breezy summer evening, like-minded nature lovers, and cold brews with friends–who would complain? 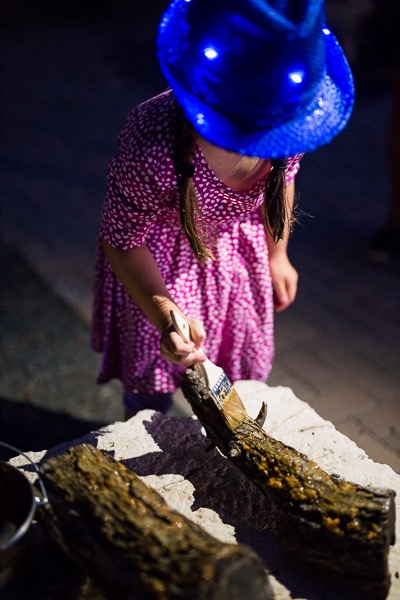 “Moth night was so rad!  Thanks for putting this event on,” said Clarissa Perez, community relations coordinator for the San Antonio River Authority, via Facebook.
Delmar Cain, a retired attorney-turned-moth-enthusiast who assembled one of two educational slide shows that ran during the event, served as chief moth docent, explaining the life cycle of the fascinating insects.
“Beer looks to be a good magnet for people, and for moths,” said Cain, taking in the crowd Saturday night. 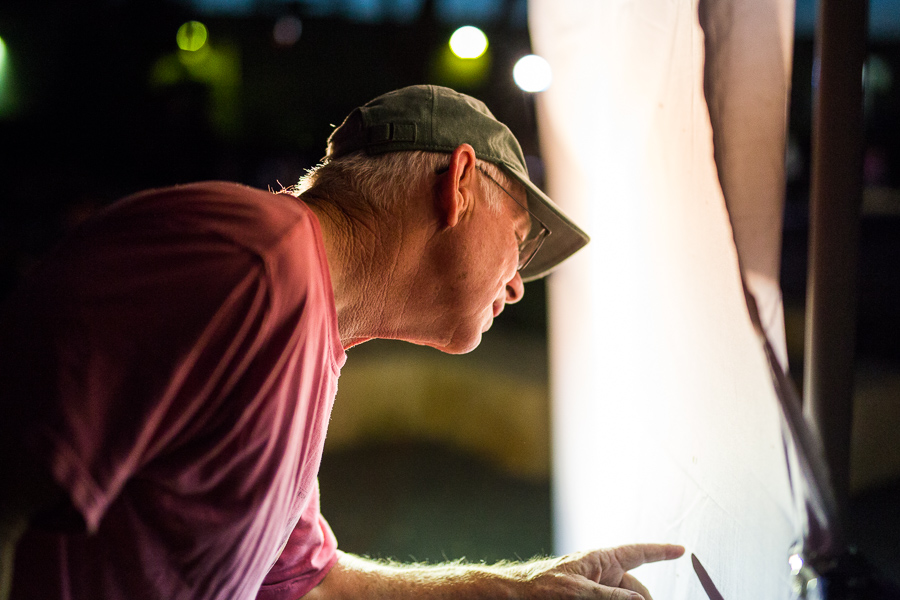 Armed with specimens  of moths he captured in the field and brought for viewing and explanation, Cain patiently answered questions from the crowd.  Also:  Cain showed off the dramatic Eastern Bloodsucking Cone-nose kissing bug.   The odd insect, a type of assassin bug, attacks and voraciously feeds on insects, small mammals and even humans occasionally with piercing-sucking mouthparts.   The bugs can carry the debilitating Chagas disease.   “If you see this guy, eliminate him,” said Cain, displaying the brown creature secured safely inside a glass vial.  One observer labeled the insect a “delightfully vile beast.” 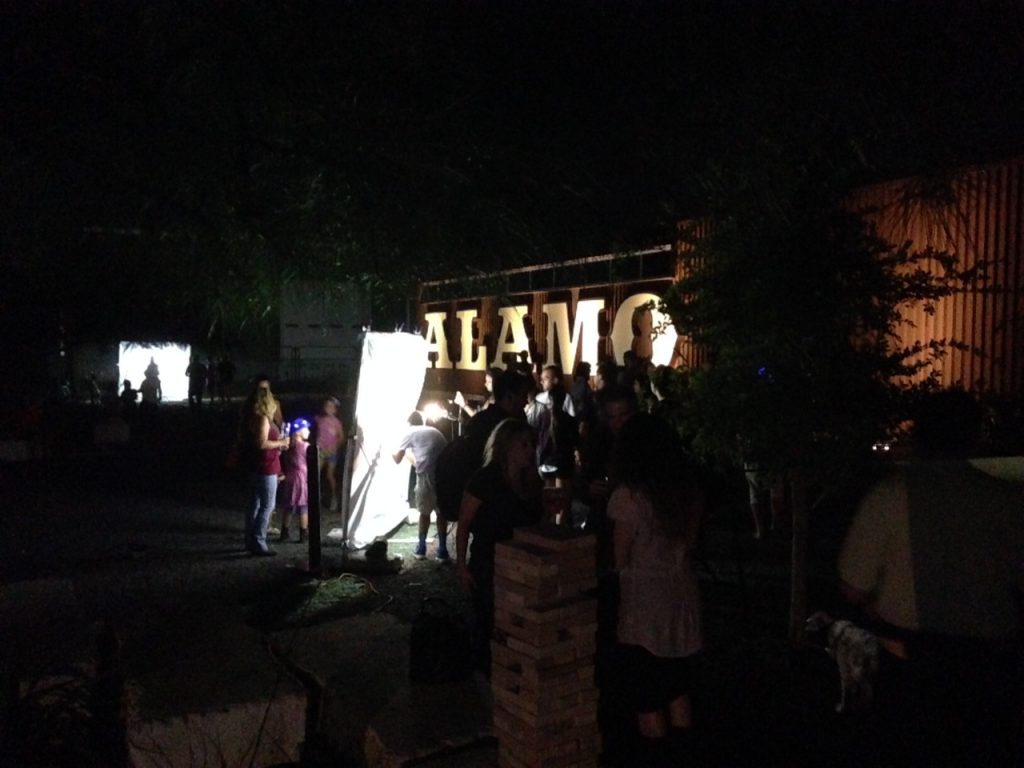 Guests bought Jimsonweed plants (host plant to the  Sphinx Moth, national spokesmoth for  National Moth Week this year), examined a Tomato hornworm, handled Sphinx moth cocoons, and played with a woolly bear caterpillar, which morphs into the dramatic Leopard moth.
All in all, a lovely outing for a hot summer night.  When’s the next Moth Night, you ask?  Stay tuned for details.
Special thanks to our Malt, Hops and Moths Night sponsors:   Alamo Brewery, The Arsenal Group, City of San Antonio, Friends of San Antonio Natural Areas, Texas Butterfly Ranch, Trinity University, and the Rivard Report.    And:  special thanks to Jeremy Karney and Genevieve Lillian Gaudet for developing our logo and ads, respectively.  GRACIAS!
Related posts: