What a difference a year makes.

At the end of 2014, we were hanging our heads contemplating the end of the Monarch butterfly migration. The 2013 -2014 season was the worst in history, with roosting populations numbering the lowest since records have been kept. The entire Monarch breeding population had fallen from highs of more than half a billion 20 years ago to only 34 million in 2014.

But then in February of this year, scientists reported a bit of rebound. The population of roosting Monarchs climbed to about 56 million. Still a long way from its peak, but progress. NOTE: For those unaware, scientists measure the number of hectares Monarch butterflies occupy at the roosting sights in Michoacán, Mexico, each winter to calculate their population. Each hectar (about 2.5 acres) occupied represents 50 million butterflies.

The good news continues. On August 6, Dr. Chip Taylor released an upbeat Monarch population status report, based on robust egg laying in the Dakotas to Michigan this summer. “I’m encouraged by the egg data,” Dr. Taylor wrote on August 6. “The size of the migration is strongly influenced by the number of eggs laid between 20 July and 7 August.”

Taylor revised a previous forecast upward, stating the population might jump to occupy 1.8 – 2.3 hectares in Michoacán. That would translate to 90 – 115 million Monarchs–continuing the rebound and doubling 2014’s numbers. 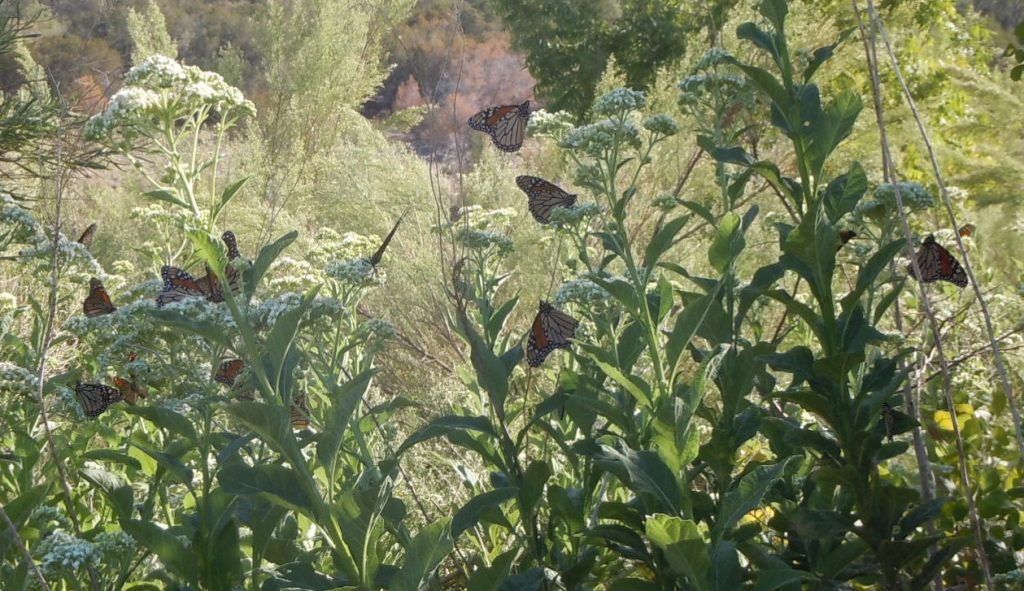 Late summer rains will help sustain nectar sources for migrating Monarch butterflies, like these nectaring on Frostweed on the Llano River  in 2013. Photo by Monika Maeckle

The weather and political climate both seem to be cooperating. Texas, home to the “Texas funnel” through which all migrating Monarchs pass each spring and fall on their way from and to their roosting spots, has had a delightfully wet spring and relatively mild summer. An end-of summer dry spell has been broken by periodic thunderstorms that can hopefully keep nectar sources viable for Monarchs when they cruise through the strategically situated Texas Hill Country later this season.

The drought has seen relief and meteorologists are predicting a “Godzilla el Niño” this winter, which conceivably could return our rivers and springs to their former free-flowing status. 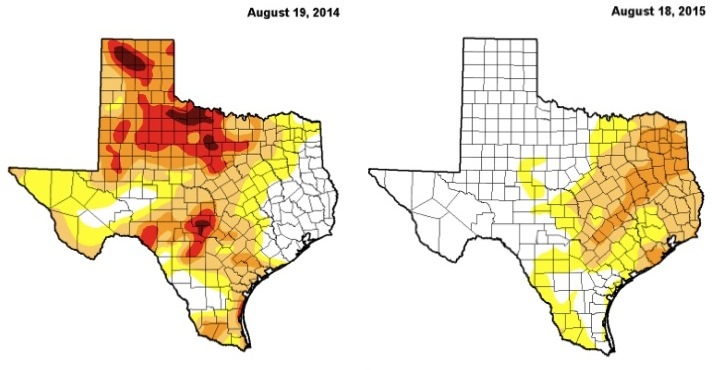 On the public awareness front, concern, understanding and resources directed at the Monarch butterfly migration and pollinator advocacy have never been stronger or more dedicated.

President Obama used his office to call attention to pollinators with his visit to Toluca, Mexico in February of 2014, where he and the Presidents of Canada and Mexico vowed to protect the Pan-American Monarch migration. Two months later, First Lady Michelle Obama planted the first pollinator garden at the White house. In June of 2014, Obama issued a Presidential memorandum calling for a National Pollinator Strategy, which was delivered in May of 2015. The goals of the strategy are ambitious and far-reaching:

1. Reduce Honey bee colony losses by more than 15% within 10 years.
2. Increase the migrating Monarch butterfly population to 225 million (their historic average), with an occupation of 15 acres in Michoacán by 2020.
3. Restore or enhance seven million acres of pollinator habitat over the next five years.

Just in the last 18 months, millions of dollars have poured into Monarch butterfly and pollinator research and restoration efforts–from US Fish and Wildlife Service, National Fish and Wildlife Foundation, US Department of Agriculture–even the Texas State Comptroller’s office. As one federal employee stated, “Every department of the federal government has been tasked to contribute [to Monarch conservation] in some way.” Monsanto Corporation, oft-vilified makers of Round-Up and neonicinitoids, has contributed millions to research–more than $4 million in matching grants and other support over three years.

Here’s just a 2015 sampling of Monsanto’s and your tax dollars at work on behalf of Monarch and pollinator restoration:

Thanks to all the newfound attention and investment–about $8 million from the incomplete list above–butterfly and pollinator advocates have been able to partake in a free webinar series on Monarch conservation staged by US Fish and Wildlife. Private landowners (including yours truly) have the option to work with the federal government to be reimbursed for pollinator improvements on private land throught the Partners for Wildlife program. And greater understanding of milkweed types and Monarch diseases is resulting from work being done at Monarch Watch, the Monarch Joint Venture, Journey North, and the recently established Monarch Conservation Fund as well as higher learning institutions like University of Texas at San Antonio.

Monarch butterflies are on the move. Should be a banner year.  Get your tags soon from Monarch Watch.  Photo by Monika Maeckle

While the millions being directed to pollinator conservation are minuscule compared to the billions directed to farm subsidies each year, it’s still good news and more than has ever been focused on the issue. We expect more as the grants mentioned above are executed, more data is collected and ways of restoring our native landscapes and milkweed stocks are researched and shared. Whether or not the Monarch butterfly migration will continue as a natural phenomenon to be enjoyed by our grandchildren is an open question.