Entry to Mexico’s most popular monarch butterfly sanctuary should cost more than $2.77

Ocampo, Michoacán — It’s a Thursday in February at El Rosario Monarch Butterfly Preserve in Michoacán, Mexico. Groups of Mexican school children mingle with tourists from all over the world. Visitors crowd around a muddy crossing, as a seep of water dampens the soil and monarch butterflies flutter and waft in enchanting waves of orange and black. Three young women squat near the earth, taking turns holding a dead butterfly retrieved from the ground. “Ok, you go,” they say in Spanish, posing with the butterfly in their quest for selfies. 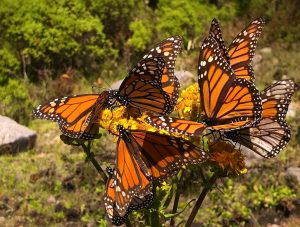 Monarchs cluster on a lone aster blooming from the disturbed crust of a tire rut. Photo by Monika Maeckle

El Rosario, one of the five sanctuaries out of 12 open to the public in Mexico, ranks as the most visited monarch butterfly overwintering roost. The dozen protected areas comprise the Monarch Butterfly Biosphere Preserve, a UNESCO World Heritage site. Here you can witness the unique majesty of the monarch butterfly migration, which starts a new season each year, right about this time.

That’s when the butterflies leave the Mexican mountains and head north in search of milkweed–the only plant on which they lay eggs.Those eggs hatch into caterpillars, form chrysalises, and become butterflies that continue the cycle over the summer, moving north, all the way to Canada. Each monarch lives about a month until the fall, when a “super generation” suspends reproduction and migrates south to overwinter in Mexico–despite never having been to the site where its ancestors launched the journey. The following year, around this time, surviving butterflies depart Mexico to reproduce and start the cycle anew.

To see these magical creatures clustered like grapes in the sacred firs or flush from the trees on a sunny winter day is a bucket list dream for many people.  The cost of admission? A mere 50 Mexican pesos–$2.77 at today’s exchange rate.

In the first three weeks of the 2019-2020 season, 20,000 tourists visited El Rosario. A Thursday visit in early February had several hundred people crowding the dirt trail, jockeying for position to snap photos and capture the moment.

Ashley Bird, manager of the Monarch Butterfly and Pollinator Festival in San Antonio, was making her first homage to the roosting sites and had visited Piedra Herrada sanctuary earlier in the week. Fewer than 20 people were there.

“At Piedra Herrada, I felt like I was visiting the monarchs’ home,” said Bird. “At El Rosario, it felt like a tourist attraction.” 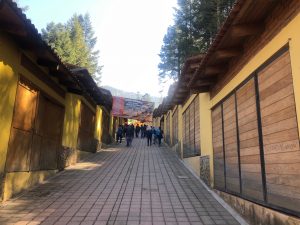 More than 250 souvenir stands, most of them empty, line the path to the sanctuary entrance. Photo by Monika Maeckle

The sanctuary has worked to appease growing crowds. Four sprawling asphalt parking lots skirt the once understated entrance to accommodate cars and tour buses. A separate paved trail for sightseers on horseback has been installed to facilitate quick transport to the butterfly viewing area.

“It only takes 15 minutes,” said our guide, Janette Valdez. Walking the steep trail, which starts at an altitude of 10,000 feet, takes about 30 minutes, but requires navigating more than 250 food and souvenir booths that precede the entrance.

Inside, at Llano Cruzado, five dirt roads intersect. Foot-deep tire ruts scar the earth, left from clearing diseased trees, said Valdez. She explained that each August, the ejidatrios, or community members who own the sanctuary, collectively determine which trees should be removed. Bark beetles are a growing problem as the climate warms. The trees are cut down to “clean up the forest before the butterflies arrive” she said. The gashes from the semi-truck used to haul away the lumber persist–as will the erosion and fragmentation of the forest. 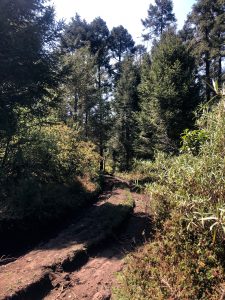 Tire ruts from large trucks brought in to haul fallen trees in August, according to our guide. Photo by Monika Maeckle

Marketed as an ecotourism destination, El Rosario has suffered its share of angst in recent weeks. Its longtime manager and butterfly hero Homero Gómez Gonzalez was found murdered in an artesian well on January 30. A few days later, part-time guide Raul Hernandez also turned up dead, with a blunt blow to the head.

The two killings have generated rumors and gossip, but as in much of Mexico, no evidence that anyone will pay for the crimes.

When asked, guides and hotel operators reported a dip in tourism resulting from the publicity surrounding the murders. Joel Moreno, owner of the JM Butterfly B&B in the village of Macheros near the entrance to the Cerro Pelón sanctuary, said his hotel had even received cancellations for 2021.

The unsolved twin homicides raise questions about sustainable tourism in a part of the world hungry for economic opportunity. Is it safe? Probably. Was it the cartels? We’ll likely never know. How many visitors are too many, and how much should they pay to enter? El Rosario, which now finds itself without a leader, will have to decide.

The 261 community members will be setting policy at their monthly meetings going forward.

Lemelin and Jaramillo found that the average expenditure for visitors to the roosting sites is $19 per day, “a very low figure in comparison to other Mexican tourist destinations.” As a result, the scientists found, the economic impact of tourism at the local level is minimal, despite a high number of visitors.

The scientists also deduced that by focusing ecotourism efforts on conservation and local employment opportunities,  the importance of education, the cultivation of local environmental ethics, and the development of sustainable low-impact facilities have been largely overlooked. “This has resulted in an experience that is neither educational nor particularly engaging,” they wrote. “Instead of being transformative, which is an essential component of ecotourism, the experience is simply consumptive.”

Providing access to and understanding of one of nature’s greatest marvels should be priced accordingly. Foreigners could easily and would willingly pay more; limits can be set on the number and pace of people allowed access to El Rosario each week, which would boost the ecotourism experience and the local economy. Cuzco, Peru, implemented such restrictions in 2017. Access to the ancient Incan fortress Machu Pichu now costs about $45 and visitors are limited to 2,500 per day. Advance reservations required.