Can’t get outside? Track the 2020 monarch butterfly migration from your desk

At 8:30 AM Central Daylight Time on Tuesday, September 22, the earth will reach the point in its orbit when, for a few short moments, the sun shines directly on the equator. This results in the Fall Equinox, a celestial milestone that makes for a day of equal parts light and dark. As we march into Fall, the days get shorter, the nights longer and temperatures drop.

Monarch butterflies pick up on these cues. Using solar receptors in their antennae, the migrating orange-and-black insects sense the shorter days and start moving south in “directional flight” toward their winter home in Mexico. Most butterflies east of the Rocky Mountains will arrive at their high altitude roosts by Day of the Dead in the first week in November. They’ll overwinter in Mexico until the spring, when they’ll start the cycle anew.

Every year, scientists, citizen scientists and monarch butterfly enthusiasts track the migration. We’re seeing the international travelers in random sightings here in San Antonio, along the Llano River in the Texas Funnel, and elsewhere. But the big pulse of monarchs, what’s typically called “peak migration,” should occur here in the last half of October, right in the middle of our 2020 Monarch Butterfly and Pollinator Festival.

Our 2020 Festival is online, so please make a point to join us by registering for our FREE events!

To figure out peak migration in your area, check out this calendar assembled by Monarch Watch, one of several citizen science initiatives that track the migrating insects. The calendar uses data collected over decades to predict when masses of monarch butterflies are most likely to move across specific latitudes en route to Mexico.

The best way to enjoy the monarch butterfly migration is to get outside as much as possible. Areas with late season flowers and nectar are good prospects for sightings. Rivers and streams also draw the migrating creatures.

If work, school, Zoom calls or other obligations keep you from getting outside to see the migration first hand–not to worry! By tapping into the FREE resources below, you’ll be able to stay on top of the migration right from your desk or mobile device.

First stop should be the Journey North website.  A free, internet-based platform, Journey North is a citizen science project of the University of Wisconsin–Madison Arboretum that engages citizen scientists across North America in exploring the interrelated aspects of seasonal change.

Journey North offers constantly updated maps of the sightings of adult monarchs, eggs, caterpillars, and roosts. Photos and reports from 35,000+ scientists, butterfly enthusiasts, professional photographers and academics contribute 50,000+ observations each year. The site also offers training and resources for teachers and others. 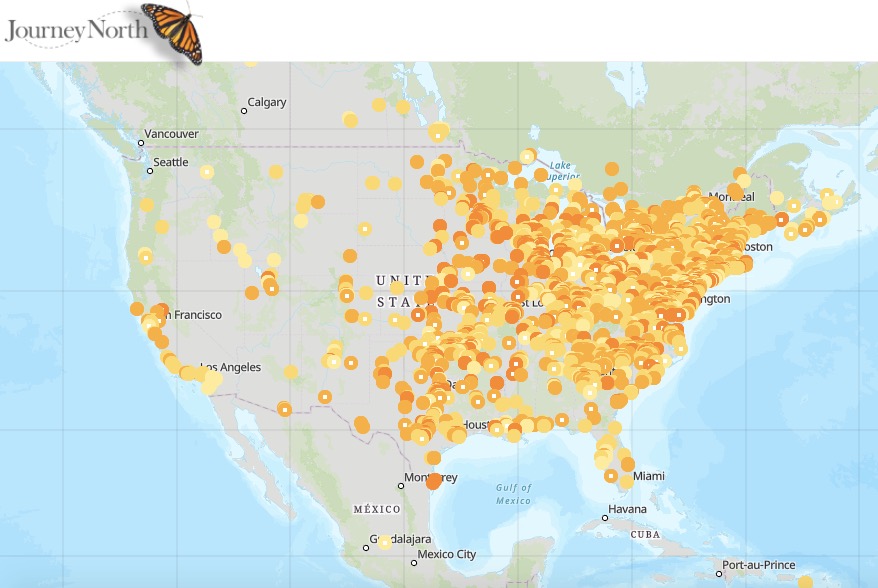 Journey North also publishes a weekly migration update on both the eastern and western monarch populations, like this one from September 16. News updates continue into the winter with posts from Estela Romero, environmental educator, who reports from the roosting sites in Angangueo, Michoacán.

Granted, not everyone uses Twitter, but an estimated 330+ million people and myriad organizations tap the free, real-time application as a search engine and personal or professional broadcast outlet. 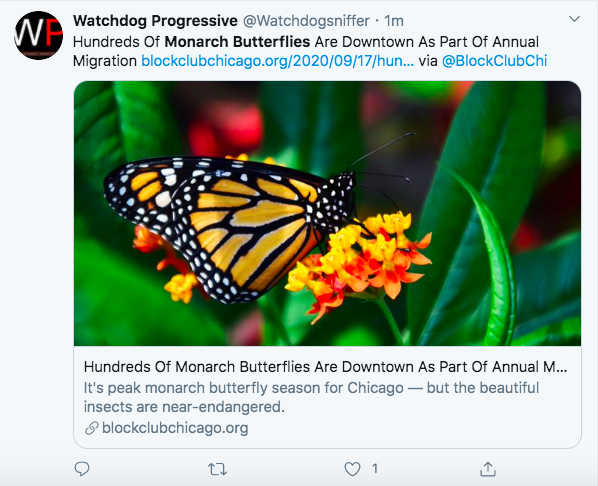 The photo above resulted from a recent Twitter search of “monarch butterflies.”

For those of us who live in the Texas Funnel, the migratory corridor through which all monarch butterflies pass on their way to their Mexican overwintering sites, wind plays an especially significant role in planning for monarch tagging outings. During migration season, I plot each weekend for maximum monarch activity.

Before leaving town, I check the Wind Map, a fantastic tool that shows which way the winds are blowing.  If winds are coming out of the North, that means monarchs will be riding the wave and we could have a big mass when they drop from the sky at sunset and roost for the night. 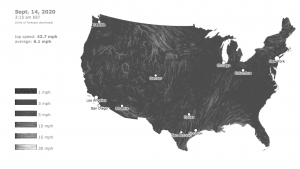 Recent screenshot of the Wind Map.

If winds are coming from the South, monarchs won’t be moving much. That could mean they’re stranded in place, which could also make for good tagging since they will likely hang out much of the day and nectar on late-blooming flowers rather than fight the gales.

Either way, the map lets us know what’s coming.  Plus, it’s simply a dreamy tool, with it’s  visual articulation of nature’s breath expressed in real-time.

As the site descriptor says: “An invisible, ancient source of energy surrounds us—energy that powered the first explorations of the world, and that may be a key to the future. This map shows you the delicate tracery of wind flowing over the US.”

If you’re reading this and you’re on Facebook, then you likely have already “LIKED” the Monarch Watch and Journey North Facebook pages.  If not, go ahead, do it now, and join the party.  (And while you’re at it, why not LIKE the Texas Butterfly Ranch Facebook page?)

With almost 56,000+ fans, Monarch Watch’s page serves as a delightful online plaza where the Monarch Watch team from the University of Kansas engages with the rest of us to share information, photos, and wax passionate about monarch butterflies and their migration. Citizen scientists, recreational observers, professional and amateur biologists and entomologists all join the conversation.

The Journey North Facebook page, with almost 38,000 fans, is equally engaging.  Journey North posts regular updates and from visitors and citizen scientists. Numerous other monarch butterfly pages have cropped up on Facebook in recent years, including this one that tracks Migrant Monarch Tag Reports. 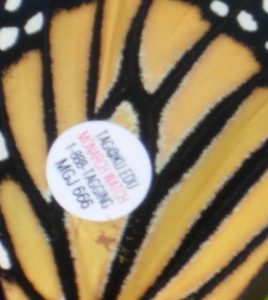 Monarch Watch oversees the tagging program from the University of Kansas at Lawrence. Photo by Monika Maeckle

Based at the University of Kansas at Lawrence, Monarch Watch founded the citizen scientist tagging program embraced by thousands of us who tag Monarchs each fall.  Its comprehensive website offers information on how to tag a monarch, raising milkweed, rearing monarch caterpillars, and a database of all the monarch tags recovered in Mexico, so those of us who tag can find out if any of our butterflies made it home.

Thanks to Monarch Watch, I was able to determine that a butterfly I netted on October 22, 2016, had been tagged in Tishomingo, Oklahoma nine days earlier.  Pretty cool story–read it here.

The Monarch Watch blog is also worth a look and you can join thousands of others to get on the D-Plex email list, described below.

If the above won’t sate your migration curiosity, then consider signing up for the D-PLEX list,  an email exchange that includes about 800 scientists, conservationists, enthusiasts, and others, including some very interesting characters.

Named after the monarch butterfly’s Latin designation, Danaus plexippus, the D-PLEX is an old-fashioned email listserv started by Monarch Watch founder Dr. Chip Taylor and invites the public. You can sign up to receive D-PLEX emails on the Monarch Watch webpage.

Careful, though.  The D-PLEX can overtake your email inbox. Conversations can escalate, generating dozens of emails a day, many of which you may not find useful. Sometimes exchanges devolve into rude online arguments. I’ve set up all D-PLEX emails to forward to a special email box that I check periodically, so as not to be overwhelmed.

iNaturalist is a massive, worldwide citizen science project that collects observations and data on all kinds of living organisms–from trees and jellyfish to flowers and bees. Monarch butterflies–and milkweed–are among the creatures it tracks.

Started at the University of California at Berkley in 2008, iNaturalist is approaching 49 million observations with 1.25 million volunteer contributors. The platform, available as a free app, allows anyone with internet access to take a picture or record the sound of a plant or creature, share the location, and upload it to the web where iNaturalist will map it and attempt to identify the organism.

A search of monarch butterflies produced a map of recent sightings, as well as useful charts reflecting the insects’ seasonality, history and other user friendly presentations of data.