Queen butterfly: is that a hair pencil in your pocket or are you glad to see me?

Later, reviewing the day’s photos at home on her desktop computer, she noticed a protuberance extending from the abdomen of the male Queen, an orange and black butterfly not uncommon this time of year, and that is often mistaken for a Monarch. Marlowe knows her plants and insects, and takes thousands of photos a year–and yet she had never seen anything like this. 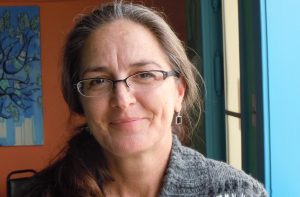 “I thought it had some fluffy seeds stuck on its hind end at first,” said the riparian restorationist and president of the San Antonio Native Plant Society.

The odd appendage is called a hair pencil, a highly specialized structure found in male moths and butterflies. Modified wing scales or body hairs are organized into tubes and hidden inside the male’s abdomen and are also known as coremata, which means “feather dusters” in Greek.

Professor Jeff Marcus of the Butterfly Phylogenomics Lab in the Department of Biological Sciences at the University of Manitoba explained that hair pencils are tucked into a pocket of the cuticle. When utilized, “there is a mechanical lever at the base of each hair pencil that can cause the pencil to come out of its pocket, to stick out and begin to secrete pheromones.”  The act of the hair pencil inflating and showing itself is called “eversion.”

And what exactly triggers the hair pencil to stick out or evert?

The attention and sexual pheromones of a female butterfly.

You are not alone in thinking this calls to mind another male body part often aroused and inflated by female attention. 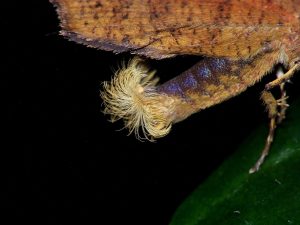 Hair pencil of the moth, Pterodecta felderi–Photo by Charles Lamm via Wikipedia

Marcus said the comparison to a mammalian erection is “partially apt.”

“Both are associated with sexual arousal and are largely unconscious/involuntary responses in males to sexual stimuli coming from females,” he said.  But hair pencils are not part of the insect genitalia and not involved in the physical act of copulation, he clarified.

And why are they called hair pencils?

“My understanding is that they are called hair pencils because they emerge from the wing or body in a fashion reminiscent of a pencil lead emerging from a mechanical pencil,” said Marcus.

First, females release long-distance pheromones that draw the males in close. This is especially common in moths. When the male butterflies or moths get near, they release their own pheromone from the hair pencils.  The male pheromone acts over short distances and serves to convince the female to mate and sometimes also to repel potentially competing males.

Marcus explained that females generally start the process by releasing the long distance pheromone. Mating won’t take place unless the female responds to the male’s short distance pheromone coming out of his hair pencils.  “In some cases, if she’s not interested–because, for example, she’s just mated with another male– she will secrete a third pheromone that will repel additional potential mates,” he added.

The phenomenon of hair pencils and the coremata so intrigued some scientists in Australia that they created a special tool in order to witness it. They named it “the Phalloblaster.”

As Australian Geographic, an arm of National Geographic put it, “Studying coremata is no easy task, because they’re usually tucked right up inside the male’s body….The Phalloblaster inflates the genitalia with a stream of pressurised alcohol to create the same shape as when the insect was alive.” See 10-second video above for a demonstration.

Dr. Chip Taylor, founder of Monarch Watch, said that monarch butterflies generally do not utilize hair pencils, even though they exist in the male butterflies’ abdomens. “It’s a part of the system that’s no longer used,” he said.

As for Marlowe, she continues to explore Nature and its surprises through her camera. “I’ve seen them do this courtship behaviour thousands of times and never noticed it. Just two courting butterflies.”