Monarch butterflies arrive in Mexico for Day of the Dead, as a late fall migration comes to end

Day of the Dead/Dia de los Muertos came and went this week as monarch butterflies arrived right on cue in the mountains west of Mexico City.

Journey North, a conservation and citizen science organization that tracks monarchs and other migrating creatures announced “BREAKING NEWS” in a Facebook post November 3.

“Monarchs are beginning to arrive within the Monarch Butterfly Biosphere Reserve!” it read. Various correspondents noted monarch sightings in Angangueo, the El Rosario Sanctuary, and more than a dozen spotted by Ana Moreno in the village of Macheros.

The butterflies’ arrival in the Mexican mountains typically coincides with Día de Muertos/Day of the Dead, observed in Mexico and elsewhere between November 1st and 2nd.

The celebration of the deceased has its roots in indigenous cultures.

According to an article on the  Monarch Joint Venture website, the belief that monarchs represent the souls of their ancestors returning to visit, is held by the Purépecha, as well as the Mazahua, two indigenous peoples of the areas in which they roost.

“The Purépecha have tracked the monarch’s (sic) return to Mexico for centuries,” said the article titled “Monarchs and Día de Muertos in Mexico.”

The piece continued: “The arrival of the butterfly, known as la parakata in Purépecha, meant that it was time for the corn harvest. The parakatas were also believed to be the souls of the dead visiting for the night of Día de Muertos (Lewis, 2019). The swaths of captivating monarchs flying overhead have continued to be an important connection between the living and the dead.Families and friends gather at gravesites of their ancestors and loved ones. There, they build them altars with photos, offerings, ornate sugar skulls, bright orange marigolds, and candles. The living then share refreshments and stories to celebrate the lives of their friends and ancestors that have passed.” 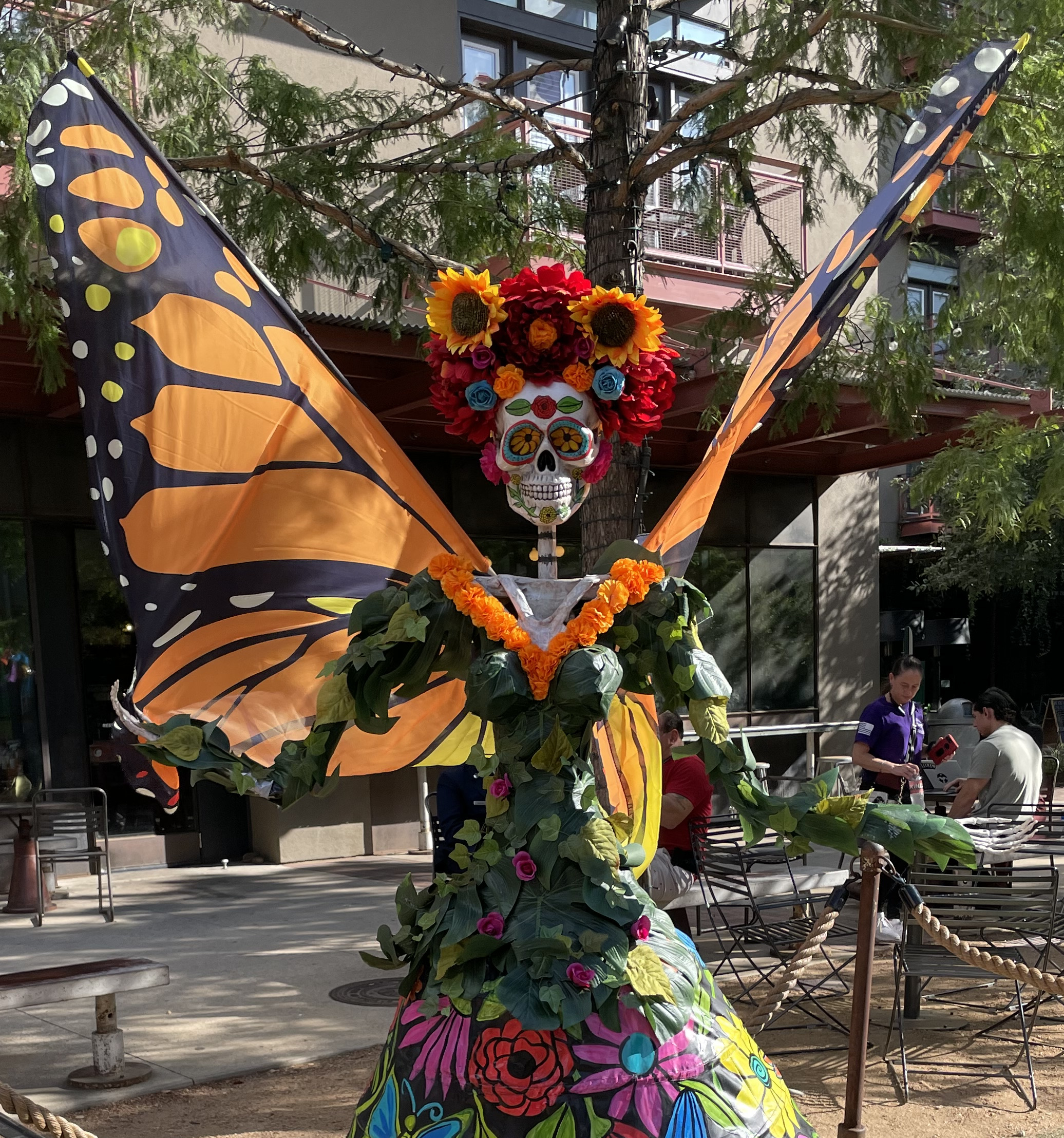 While some monarchs have moved through Texas into Mexico, many others linger, thanks to warm temperatures and ample nectar. The availability of food and mild weather encourages the butterflies to slow down and not rush.

In San Antonio we have witnessed a long, slow and constant presence of monarchs–and other butterfly species– over the past two weeks.

Stands of purple mistflower draw the creatures like a magnet, as seen in the photo at the top of this post. Even this week, dozens of monarchs remain in backyards and along the San Antonio River, often in the company of myriad Queens, sulphurs, painted ladies, swallowtails and snout-nosed butterflies.

Responding to a social media post depicting a healthy male monarch nectaring on mistflower, Marylynne Norman of Lampasas, Texas, noted she spotted five monarchs in her garden visiting the mistflower and Turk’s Cap this week. Vicky Floyd of Orange, Texas, said 30 monarchs occupied her enclosure, but that the plants in her garden were “sparse.”

Mary Kennedy of Boerne, Texas, shared via email that 50 monarchs were tagged and 100 were seen at Herff Farm last week.

Others chimed in from further north noting the lack of monarchs this year. Ingy Ann said that in Virginia monarchs were ”sadly very scarce” this year, adding that she’d only seen a dozen all season.

Central and South Texas have experienced an extremely mild fall with few cold fronts and intermittent rain, extending the late season nectar plants’ lifetimes and providing an ongoing buffet for monarchs and other pollinators.

For the migration, this is not necessarily a good thing, as it encourages monarchs to stay in place and perhaps lay eggs on remaining milkweeds, burn their fats, and not migrate. We know that monarchs either mate or migrate, so if reproduction occurs, they do not make the voyage to Mexico.

What does this mean for the 2022 monarch migration season?

Dr. Chip Taylor of Monarch Watch weighed in. “All I can tell you is that the population will be low.”