Dr. Chip Taylor, founder of Monarch Watch, told more than 100 butterfly breeders, enthusiasts and citizen scientists Saturday night that the entirety of this year’s migrating Monarch butterfly population may occupy only a half of a hectare–or about 1.25 acres–in Mexico.   That would make this year’s Monarch population the smallest in its recorded history. 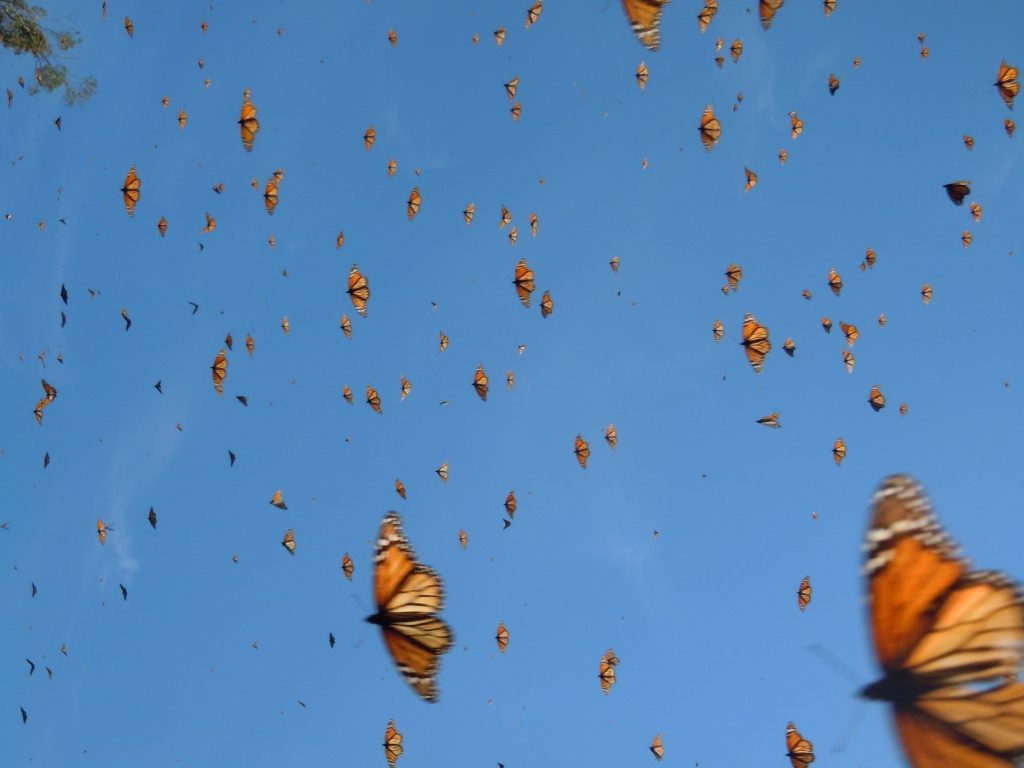 Scientists measure the hectares occupied by the migrating butterflies each spring at the ancestral overwintering sites in the mountains of Michoacán to determine the size of the population.
“We had some really robust Monarch butterfly populations in the 90s,” Taylor said.  “But we’re never going to see those again.”

The decline of the Monarch butterfly population. In the 90s, their roosting grounds averaged 22 acres. In 2013, they’re predicted to be 1.25 acres. Graphic via Monarch Watch

A perfect storm of dire circumstances is to blame.  The increased use of genetically modified crops, climate change disrupting the insects’ life cycle, pervasive pesticide use, general habitat destruction in the U.S. breeding grounds and in the roosting sites in Mexico–all have created a set of obstacles that threaten the continuation of the unique phenomenon of the Monarch migration.
“We all have to work together to create Monarch habitat,” Taylor told the combined audience of International Butterfly Breeders Association and the Association for Butterflies in San Antonio.  The conference convened to celebrate the 15th birthday of the butterfly breeding business, widely acknowledged to be founded by Rick Mikula, “the butterfly guy.”
Taylor’s presence at the convention was a hopeful sign that the academic/scientist community might be able to find common ground with professional breeders who supply hundreds of thousands of butterflies, caterpillars and eggs each year to schools, festivals, exhibits and other events.   The relationship has been taxed in the past by differences of opinion on the appropriateness of butterfly releases.
One point of agreement:  Monarchs are not only the “money crop” for breeders, they also are the poster species for climate change and habitat destruction. 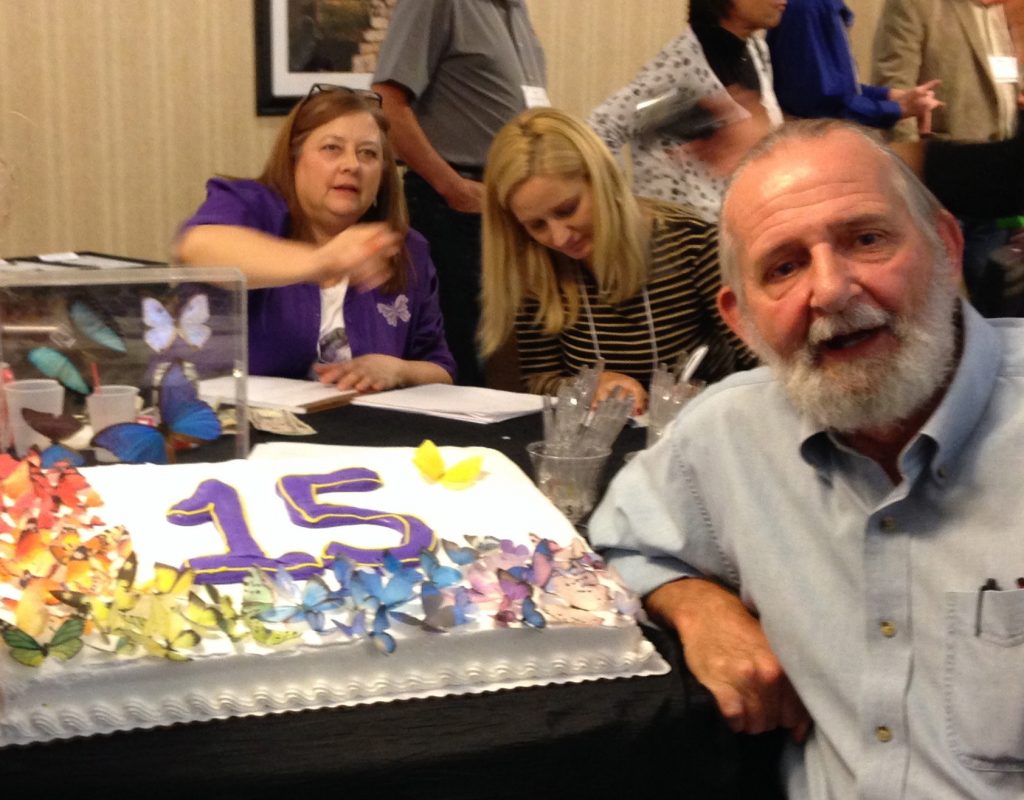 “Monarchs are the iconic species to which we can attach passion and do good for pollinators,” Dr. Taylor told the crowd.   “It’s not just about the Monarchs.  It’s everything else.”
Borrowing from lectures that he delivers regularly to students at the University of Kansas at Lawrence with titles like “The World of 2040” and “Humans & Climate:  Past, Present and Future,” Taylor summarized the scenarios shared by the recently released United Nations Climate Change report.  The report includes research that suggests global warming will 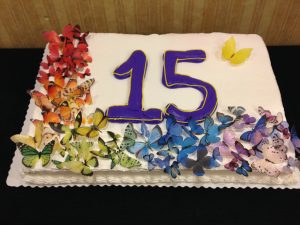 The combine conference of the IBBA and AFB celebrated 15 years of the commercial butterfly breeding business. Photo by Monika Maeckle

reduce agricultural production by as much as two percent each decade for the rest of this century while demand for food climbs 14%.  Dr. Taylor underscored the point by adding that 75% of food crops are pollinated by birds, bees and butterflies.   The presentation put a sobering spin on the otherwise celebratory evening, which concluded with an oversized chocolate birthday cake decorated with edible soy and rice paper butterflies.
IBBA president Kathy Marshburn suggested that IBBA breeders, who live in at least 30 states and 13 different countries, could easily participate in the Monarch Watch’s Monarch Waystation program.  The program, launched in 2005, encourages the public, schools and others to create pollinator habitat by planting milkweed gardens for Monarch butterflies, something that every breeder does in the course of their business.
“That would be a simple thing to accomplish,” said Marshburn, who committed to discussing a resolution by the IBBA Board of Directors to implement such a program.  “It makes perfect sense,” she said, “and will push us more toward conservation efforts.” 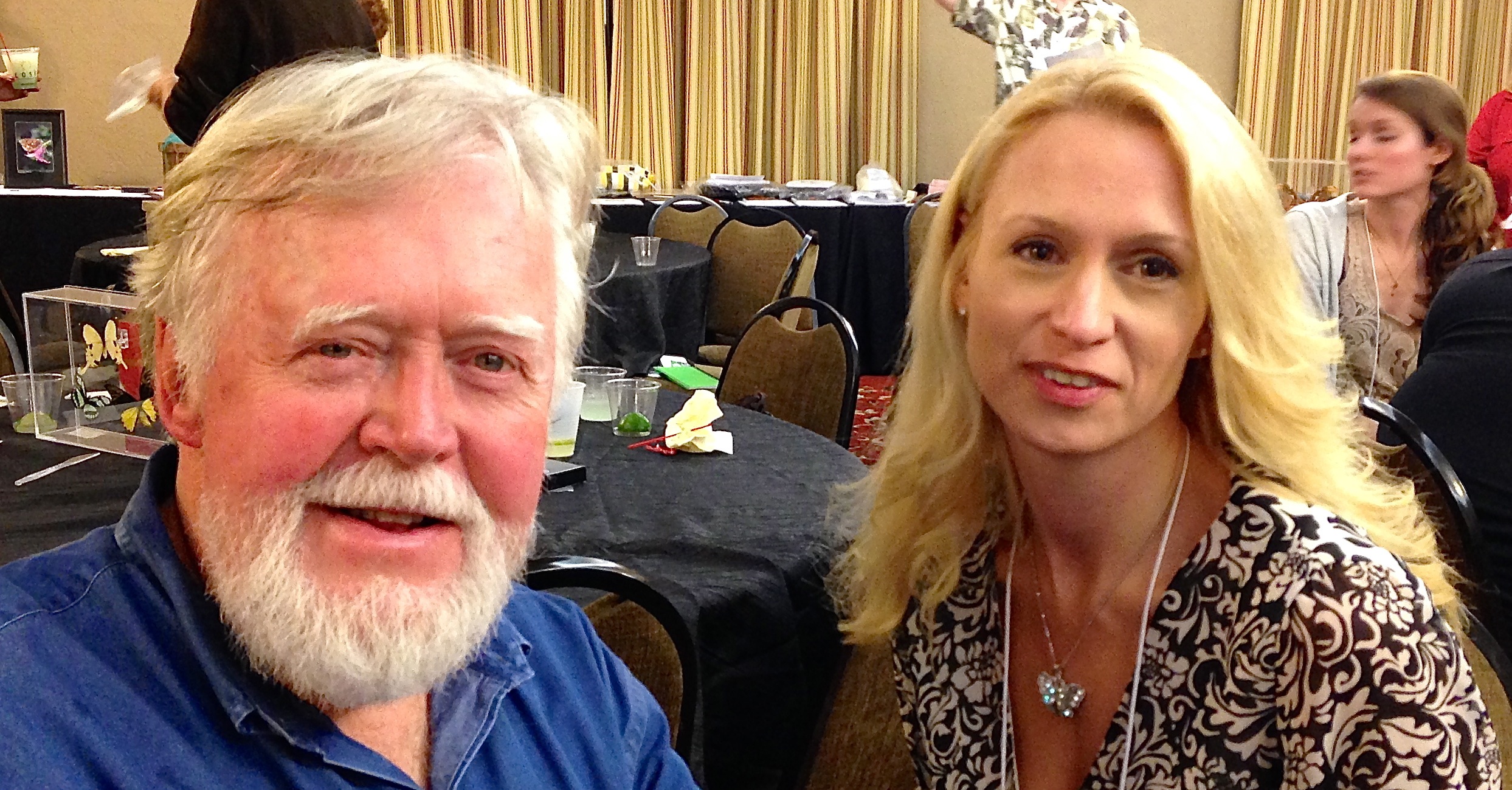 Dr. Chip Taylor visits with IBBA president Kathy Marshburn at the organization’s combined conference with the Association for Butterflies in San Antonio. Photo by Monika Maeckle

Dr. Taylor posed for photos with conference attendees, answered questions and generally wowed the crowd with his accessibility, Father Christmas demeanor and passion for the topic.   To climate change deniers, Taylor said:  “It’s physics.  It’s chemistry.  It’s undeniable.  Are we on a sustainable path?  No.”
Taylor has a decades long passion for pollinators.   He began his career studying sulphurs,  the ubiquitous yellow butterflies that feed on legumes such as clovers and alfalfa.   He was forced to leave that field of study after developing an allergy to them–an apparently not uncommon occurrence in science when one spends lots of time with a particular species. 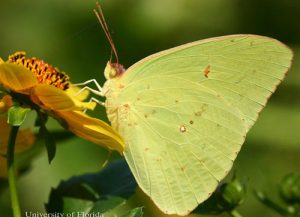 He then moved on to studies of the biology of neotropical African (killer) bees in South and Central America, a course he pursued for 22 years.   In 1994 he started Monarch Watch, the citizen science tagging program that started in 1992 and tracks the Monarch migration by having common folks net, tag and record the sex of migrating butterflies, then report the information to a central database managed by the Monarch Watch staff at the University of Kansas at Lawrence.  The program has contributed much to the understanding of the mysterious Monarch butterfly migration.
Perhaps most important, though, is how Monarch Watch has engaged average citizens in  hands-on understanding of conservation and the environment.
Taylor, 76, said he feels a sense of urgency to engage the public in pollinator protection.  He has no qualms about tapping the popularity of Monarch butterflies to do so.  “There’s an innate interest in this mysterious insect,” he said.