The dismal state of the Monarch butterfly migration came into closer focus this week, as reports from Mexico suggest that only three million butterflies had arrived at the ancestral roosts in Michoacán for Day of the Dead, their usual arrival time, the New York Times reported.  The 2012 season, acknowledged as the worst year for the insects population wise, counted 60 million Monarchs.  In prime years, they numbered 450 million.

Video may be as good as it gets from now on, when it comes to observing the Monarch butterfly migration.  Enjoy this one, taken in 2007, by Jesse Waugh.

Dr. Chip Taylor, founder of Monarch Watch, relayed a similar prognosis two weeks ago, addressing the International Butterfly Breeders conference.   Dr. Taylor stated that the butterflies would likely occupy only 1.25 acres of forest in the mountainous roosting grounds west of Mexico City.  At their height, the creatures roosted in 50+ acres of forest. How depressing that the entire population of Monarch butterflies east of the Rocky Mountains could fit into a space smaller than a strip shopping center. 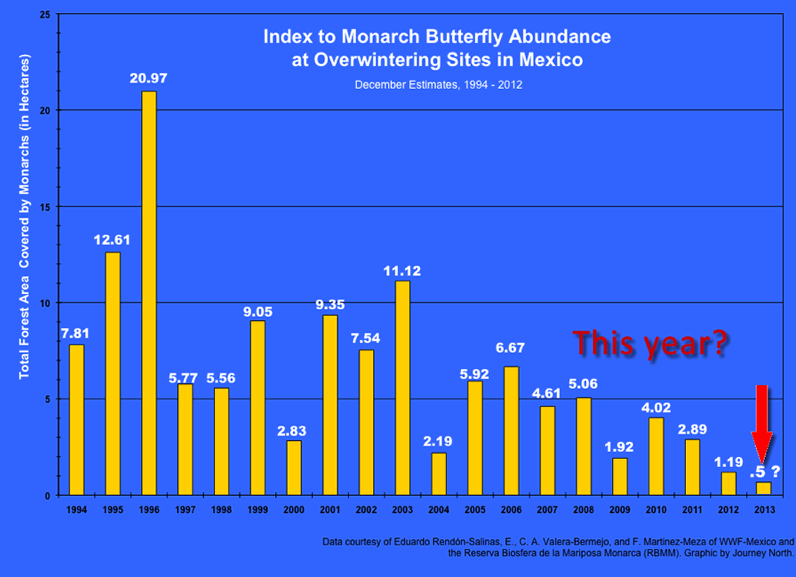 Only three million Monarchs made it to Mexico this year and may occupy only 1.25 acres of forest this year, a record low. Graph via Journey North

Each December, scientists measure the hectares occupied by the migrating butterflies at their ancestral overwintering sites in the mountains of Michoacán to determine the size of their population. (NOTE: one hectare equals 2.47 acres.)
Our friend and Monarch butterfly expert Dr. Lincoln Brower, quoted in the New York Times, forwarded an email from Mexico to the D-PLEX list (an email list for butterfly enthusiasts) last week.
“What I find worrisome is the late arrival of the butterflies,” wrote Dr. Brower, adding that the butterflies usually arrive in force at the very beginning of November.  Concern resulted when for the first time in recorded history, the Monarchs did not arrive in time for Day of the Dead celebrations in Mexico.  Here’s an excerpt from the email:

The monarch population is very low, the trees are not fully covered by monarch like in past years. In Chincua, there are approximately 14 trees, in Rosario, a similar number of trees was found, however in the past few days there was a cold front that entered the country, there were trees that fell down as a result of the strong winds, especially in Rosario, right in the middle of the monarch colony. The colony at Pelon is still wandering about and also with very low numbers.

Biologist Gloria Tavera Alonso told the Spanish language news agency EFE that “More or less we’re estimating that we’ll have 50 percent fewer than this time last year.”   Last year, only 60 million butterflies made it to the roosting sites, the worst year in history–until now. 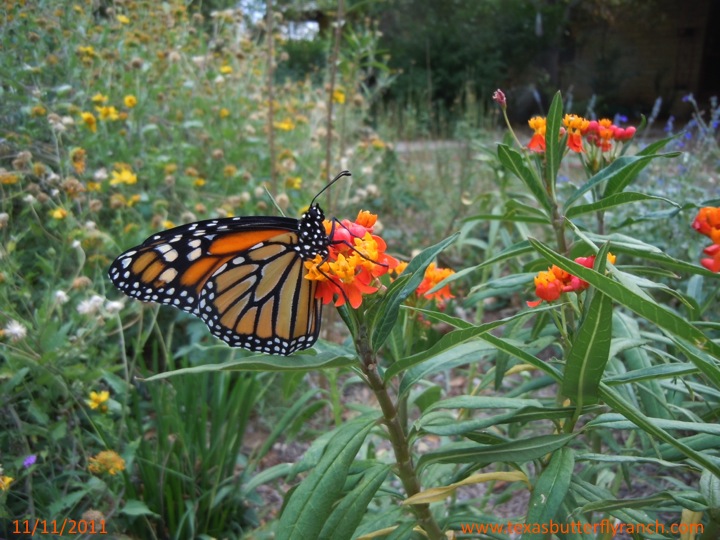 What can you do?   We’ve suggested in the past that you plant milkweed.  That’s a start.
But we also need to encourage our lawmakers to approve the Save America’s Pollinators Act, H.R. 2692.   The bill would ban neonicotinoid pesticides, introduced three decades ago without appropriate field study to its side effects.    The newcomer pesticide, often referred to as the “new DDT,” is the first new class of pesticides introduced in the last 50 years and while apparently

Don’t delay, sign the petition today. Photo via Friends of the Earth

milder on human beings, has a devastating effect on bees, butterflies, and other pollinators.  Here’s a few facts from the Xerces Society, a pollinator advocacy organization.

Recent research suggests that neonicotinoids can cause increased levels of proteins in bees that inhibit key molecules involved in their immune response, making the insects more susceptible to attack by harmful viruses.   The much publicized Colony Collapse Disorder, which has decimated the bee population, has been linked to neonicotinoids as well.
Insects like bees and butterflies are responsible for pollinating 75 percent of our food crops–one of every three bites of food you take. Shortages of bees have increased the cost of growing food because farmers must rent them for pollination services, resulting in food cost production increases by as much as 20%.

Please help protect bees, butterflies and other important pollinators by supporting H.R. 2692, the Save America’s Pollinators Act. They are the glue that binds our ecosystem.   Sign the petition now.   And in the meantime, plant some milkweed.