Mexican journalist Jaime Maussan passed through San Antonio for the second time in a month this week to gather information on a documentary he is making for Mexican public television.
Maussan has worked as a journalist for decades in Mexico serving various media outlets, including 60 Minutes, Telemundo and ABC Radio.  He’s well-known as Mexico’s premiere ufologist–that is, expert on UFOs–and devotes himself to hosting duties of an online TV program called Tercer Millenio.
He and producer Guillermo Figueroa and McAllen-based broadcast reporter Graciela Echeverria spent much of Thursday visiting with Monarch Larvae Monitoring Project volunteer and trainer Kip Kiphart, who they said spoke passionately about the threats to the Monarch butterfly migration.  Kiphart had not returned calls or emails to let us in on the details as of the time we posted this.  Kip, let’s hear it. 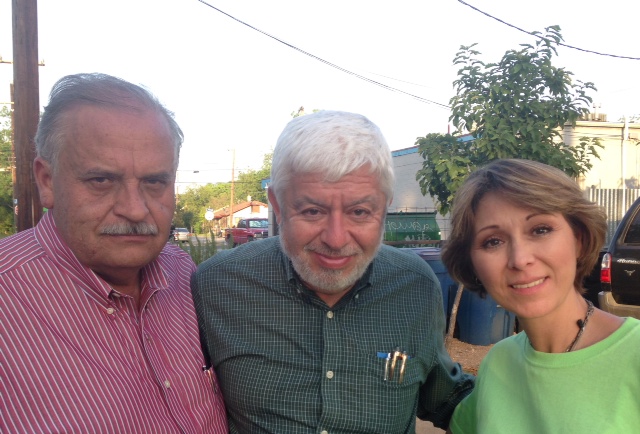 Guillermo Figueroa, Jaime Maussan and Graciela Echeverria stopped by to chat Monarch migration for their documentary on the subject. Photo by Monika Maeckle

The team then stopped by to get my thoughts on the future of the migration and to take a look at my modest urban butterfly garden–a temporary gardening fix at my Lavaca neighborhood apartment.   The 25′ x 4′ plot has pacified my butterfly gardening needs for the past two years in the interim while my husband and I build a house that will have a real yard and my first, dedicated mariposario, or butterfly house.  We’re hoping to move in within a few months.
What are my thoughts?   Dreary.  The perfect storm of climate change, human encroachment on habitat, genetically modified crops, herbicide tolerant corn and soy, increased use of pesticides, historic drought–it’s not looking good.  For the first time in my life I said out loud into a microphone that I have made my peace with the possibility that the Monarch butterfly migration may cease to exist within my lifetime.   A troubling thought, but a real–even likely–possibility. 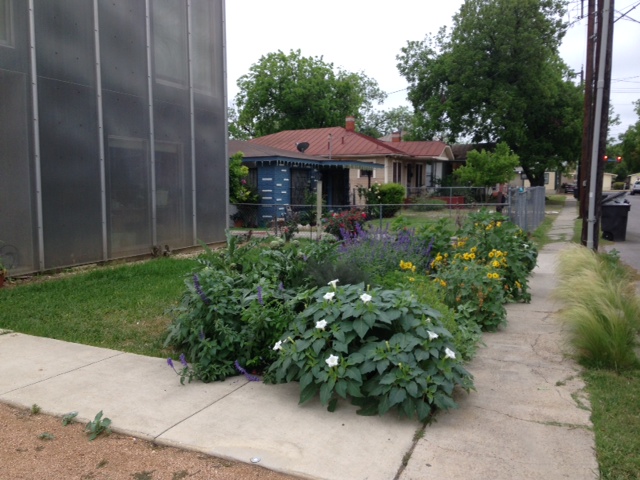 My urban butterfly garden–if I can do it here, you can, too. Get busy. Photo by Monika Maeckle

Efforts to raise red flags and awareness can postpone that.   Maussan and team secured a $600,000 budget from Television Edukativo, the Mexican equivalent of public television in the U.S. to make the documentary.   Making people care–and it appears that they do–is a starting point.
“We plan to make this documentary within the year and release it on February 19, 2015, exactly one year after the meeting in Toluca,” he said, sitting in a rocking chair on my porch near downtown San Antonio.
As you may have heard, on February 19, the Presidents of the United States and Mexico, Barack Obama and  Enrique Peńa Nieto, and Prime Minister Stephen Harper of Canada, discussed the preservation of the Monarch butterfly migration when they met in Toluca, Mexico, just 75 miles from the Monarch butterfly ancestral roosting sites.   The meeting made international headlines and put the Monarch butterfly migration on the radar of politicos throughout North America.   Seven weeks later, First Lady Michelle Obama planted milkweed at the White House vegetable garden for the first time in history. 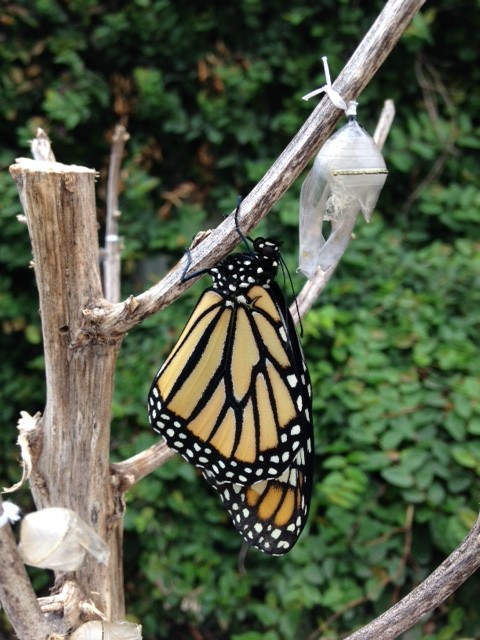 Only two of 11 eggs collected in my downtown butterfly garden made it to the butterfly stage this spring. This male was released hours after Maussan’s visit. Another Monarch, a female, followed shortly. Photo by Monika Maeckle

Maussan has had a long history of Monarch butterfly activism.   He did a story in Mexico on the location of the Monarch roosting spots way back in 1976, and continues to help raise awareness of the threat to the migration.   After our visit, he and his team planned to hit the highway for Austin to visit with Dr. William Calvert, one of several folks who revealed the location of the Monarch butterfly roosting sites to the world in 1976 following Dr. Fred Urquardt’s National Geographic cover story, which declared the discovery of the sites, but kept their exact location secret.

Maussan and his crew plan to return throughout the year to document the entire migration–from Michoacán through Texas to Canada and back. The undertaking reminds me a little of Ari Shapiro’s Google Earth tour of the Monarch Butterfly Migration, above, take a look.  Maussan also mentioned that he plans to ask the American ambassador and top officials of the Canadian government to share the documentary with their public television entities once it is complete.
We look forward to seeing the final product.
Related posts: