A male Monarch butterfly, tag number WMX658, paused Saturday morning October 1 around 11 AM on a fresh Frostweed bloom along the Llano River. Netted and retrieved, the faded Monarch was photographed, then released to set sail for his flight to Mexico. 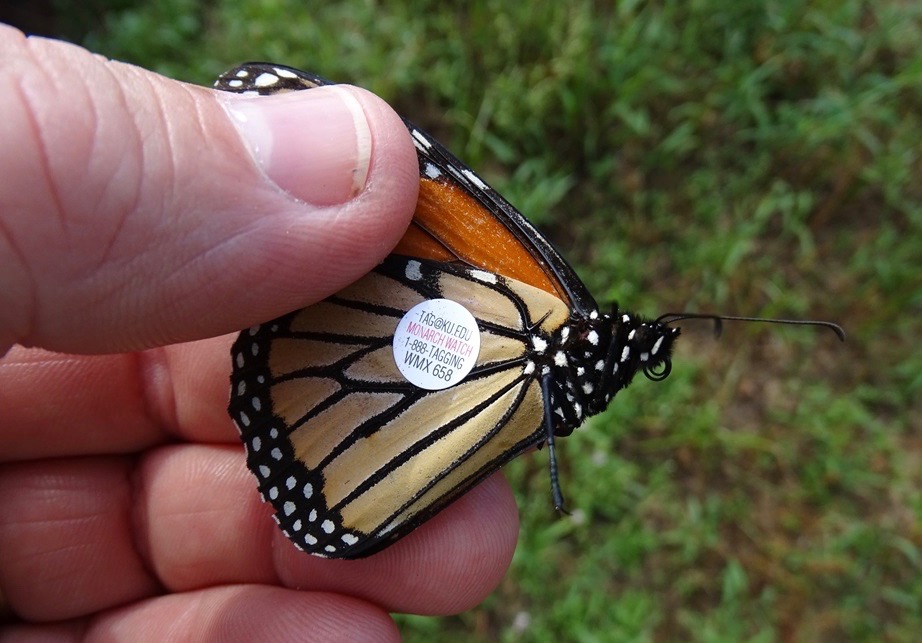 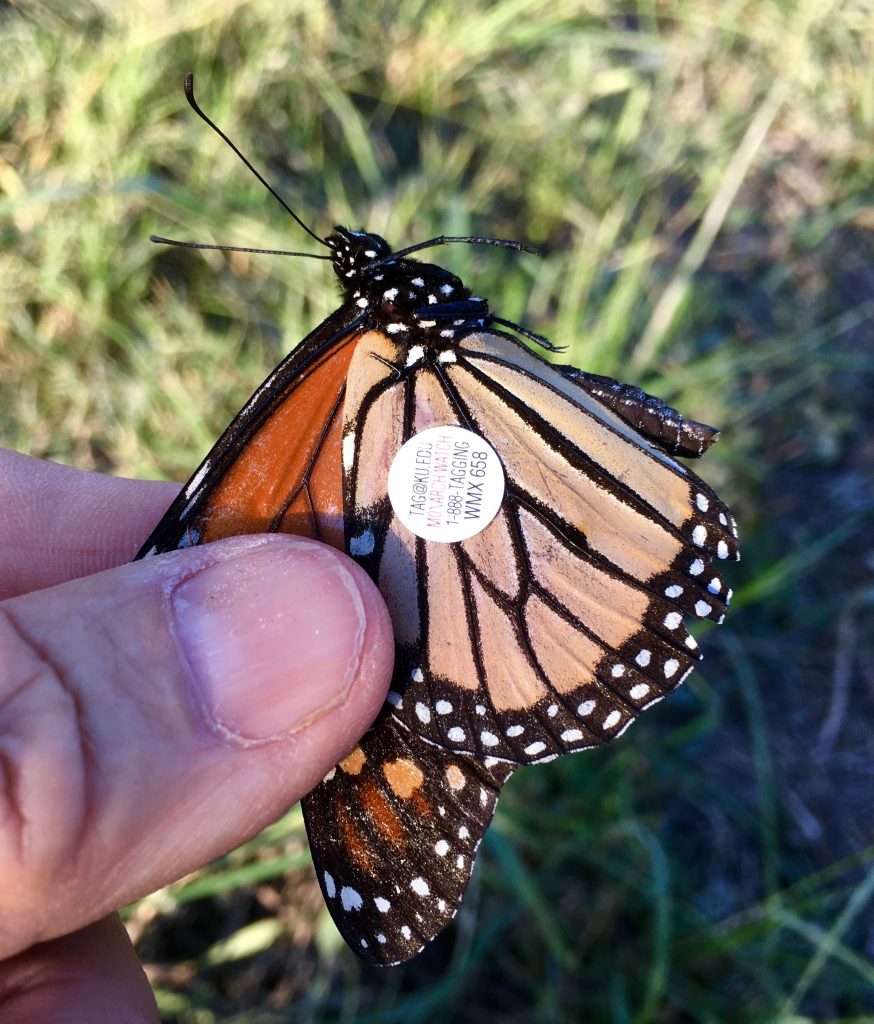 About 350 miles and nine days later, WMX658  was netted on the Llano River near London, Texas. Photo by Monika Maeckle

Thanks to the miracles of social media and the tight-knit Monarch butterfly community, it soon became apparent that Mr. WMX658 was tagged at the Tishomingo National Wildlife Refuge in southern Oklahoma on September 22 about 10:30 AM by Justin Roach, wildlife biologist for the US Fish and Wildlife Service refuge there.

Roach said by phone that WMX658 was one of 15 butterflies tagged that day. About 350 miles later, I netted the butterfly in Kimble County near London, Texas. 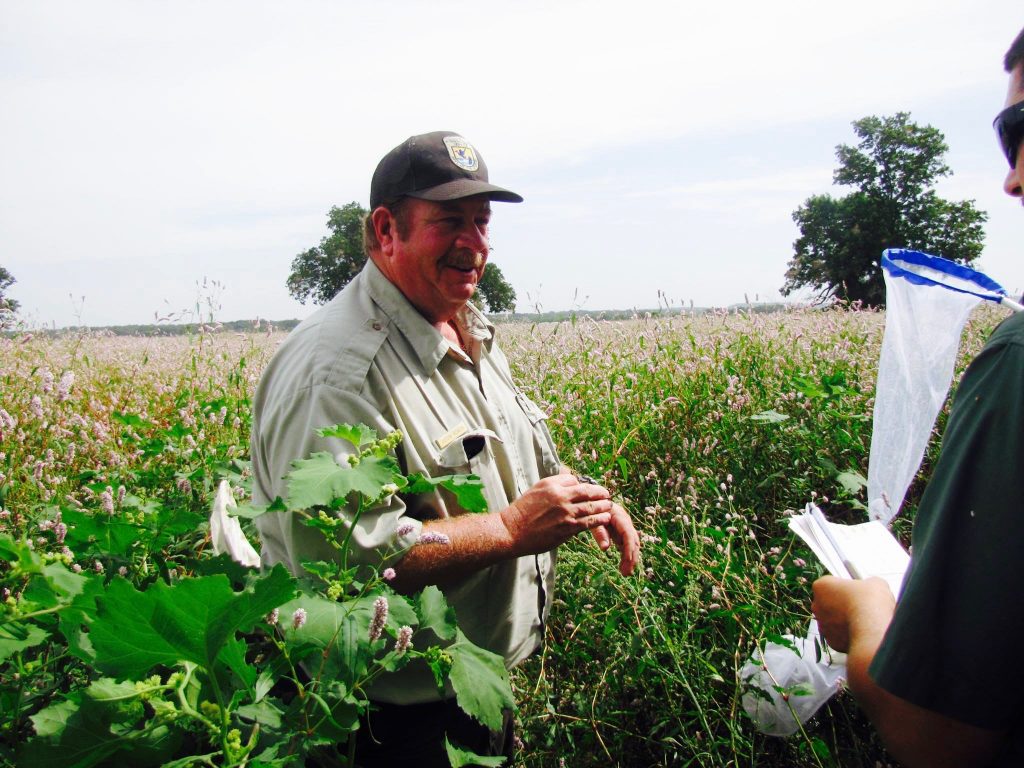 That means WMX658 traveled about 44 miles per day, an impressive clip, to reach our nectar patch along the Llano. Hopefully, he’ll have fueled up enough in Texas to carry him the remaining 920 miles to the overwintering roosts in Mexico.

“It seems the migration is more consistent this year than I’ve ever seen. Every day there’s been a few,” said Roach, who usually tags between 100-200 butterflies annually. The day WMX658 was tagged, butterflies were nectaring on Smartweed, a member of the Polygonum family.  Roach said a school outing was planned for that Thursday, but somehow the kids couldn’t make it so he just tagged with staff. 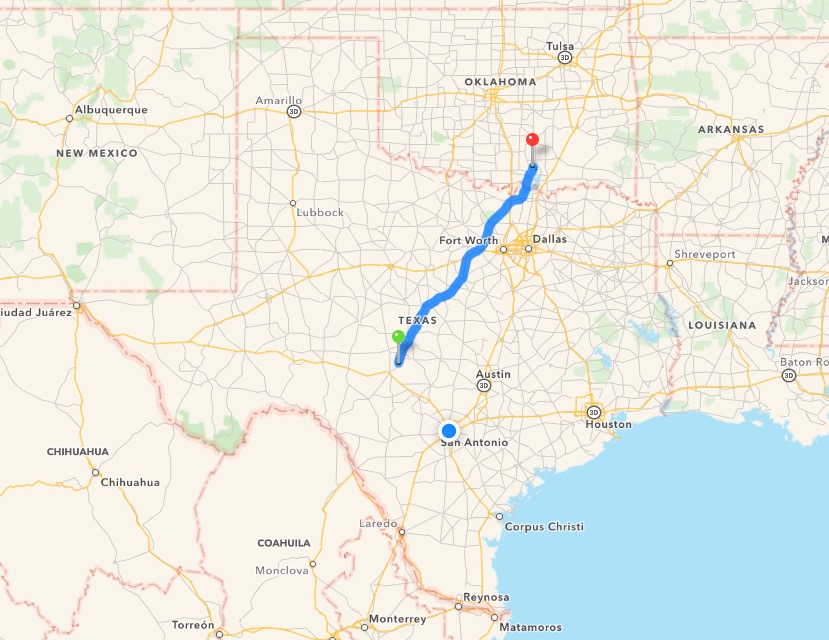 Having tagged about 1,000 Monarchs since 1997, Roach has had two recoveries in Mexico, where the butterflies are typically found on the forest floor after having made the full trip to Michoacán. This was the first time someone found a Monarch he had tagged and reported it live.

It was a first for me as well. In 11 years of tagging more than 3,000 Monarch butterflies with 29 recoveries, I had never netted a Monarch tagged elsewhere. 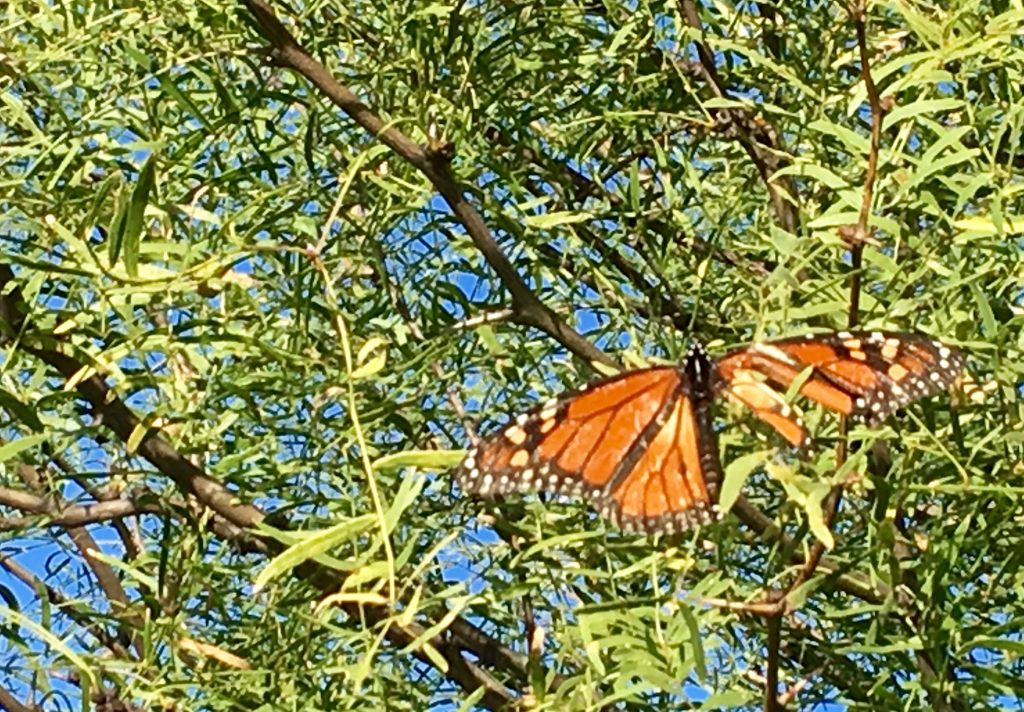 This poor male was too ragged to tag. Photo by Monika Maeckle

Our Oklahoma Monarch was just one of about two dozen spotted and 11 tagged on the Llano this weekend–all males. Just a week prior, on September 26, more than five inches of rain fell in the Texas Hill Country and parts of South Texas. The storm system left the landscape thoroughly drenched and primed for sustaining late season blooms for peak migration visitors later this month. 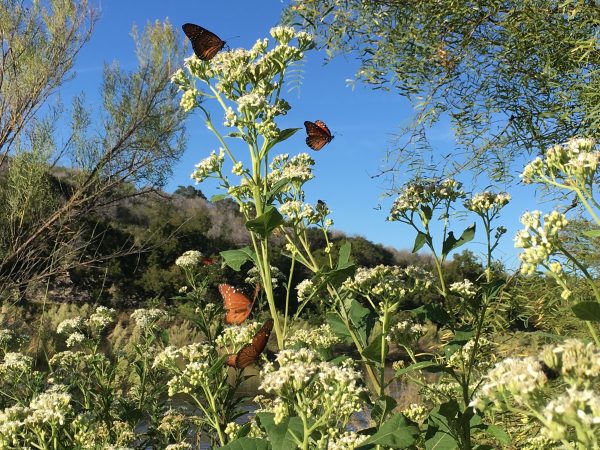 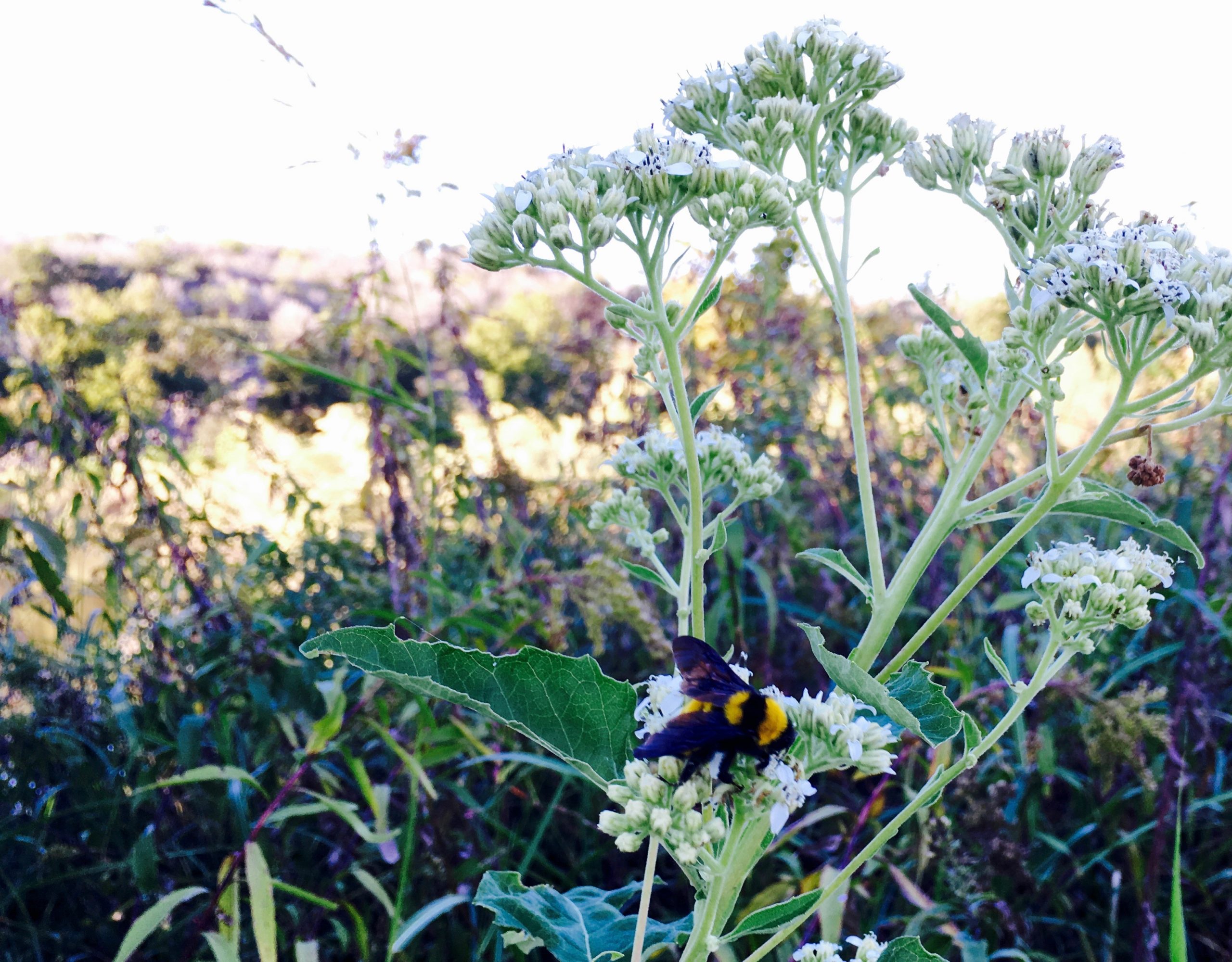 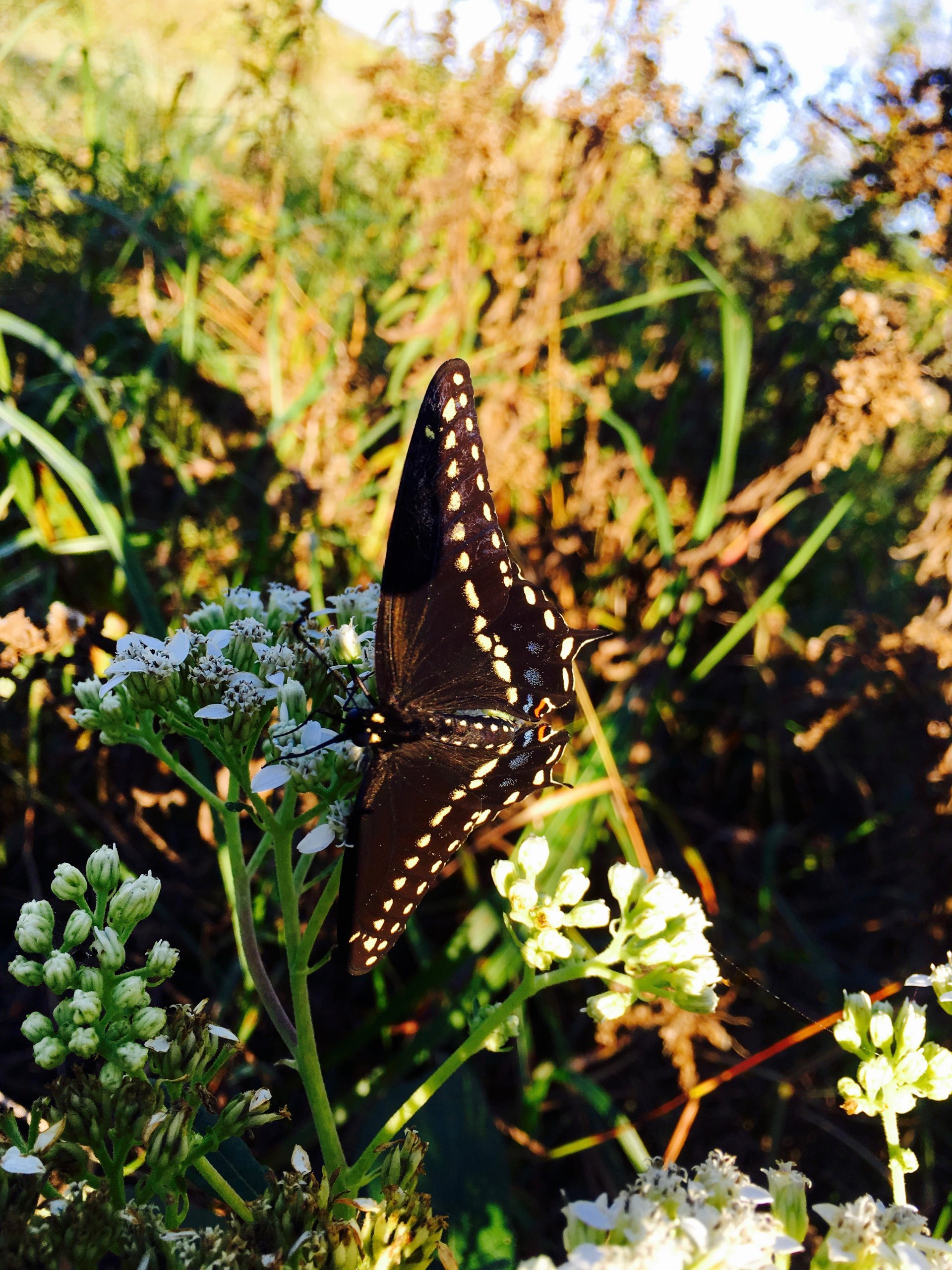 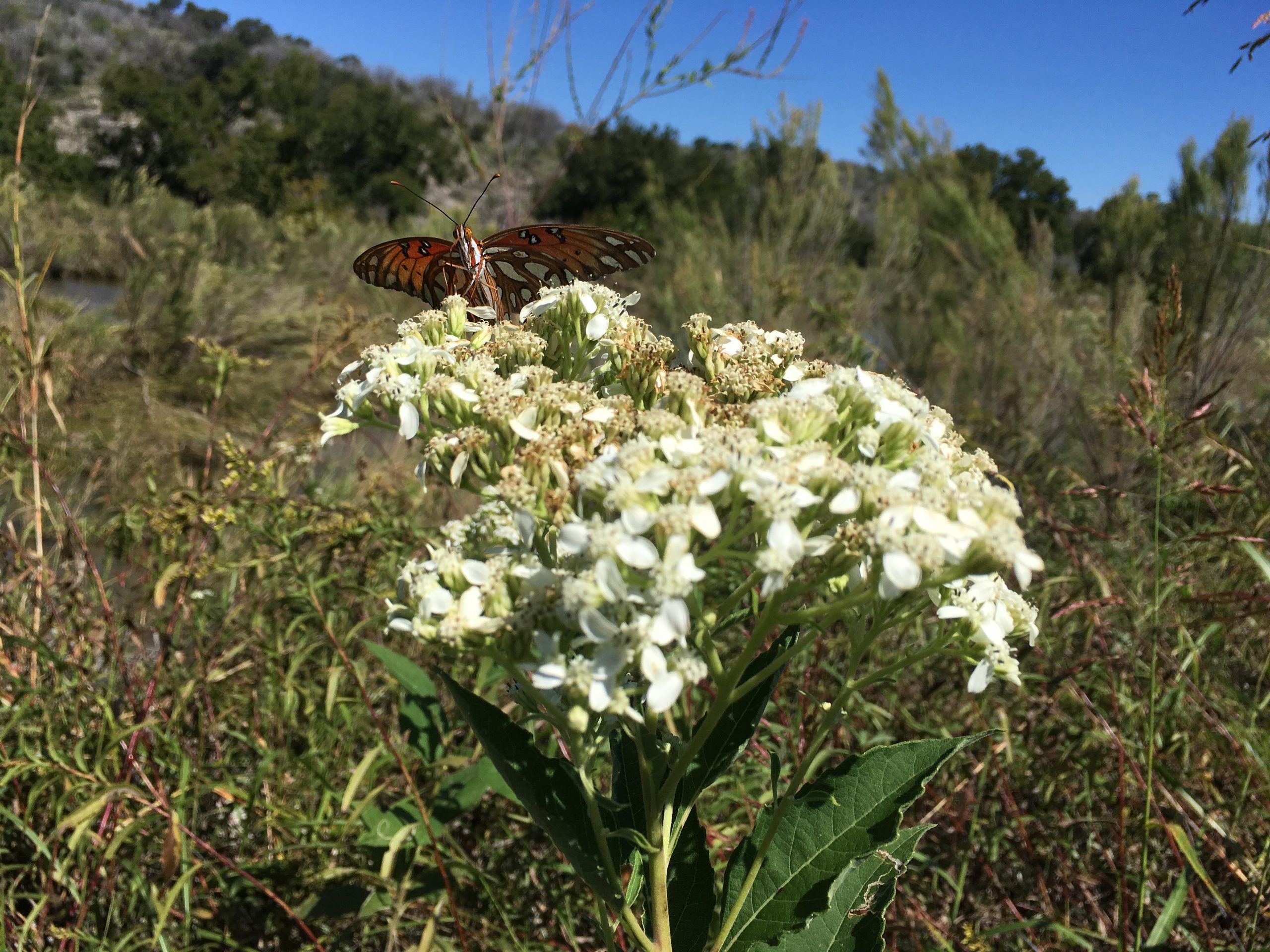 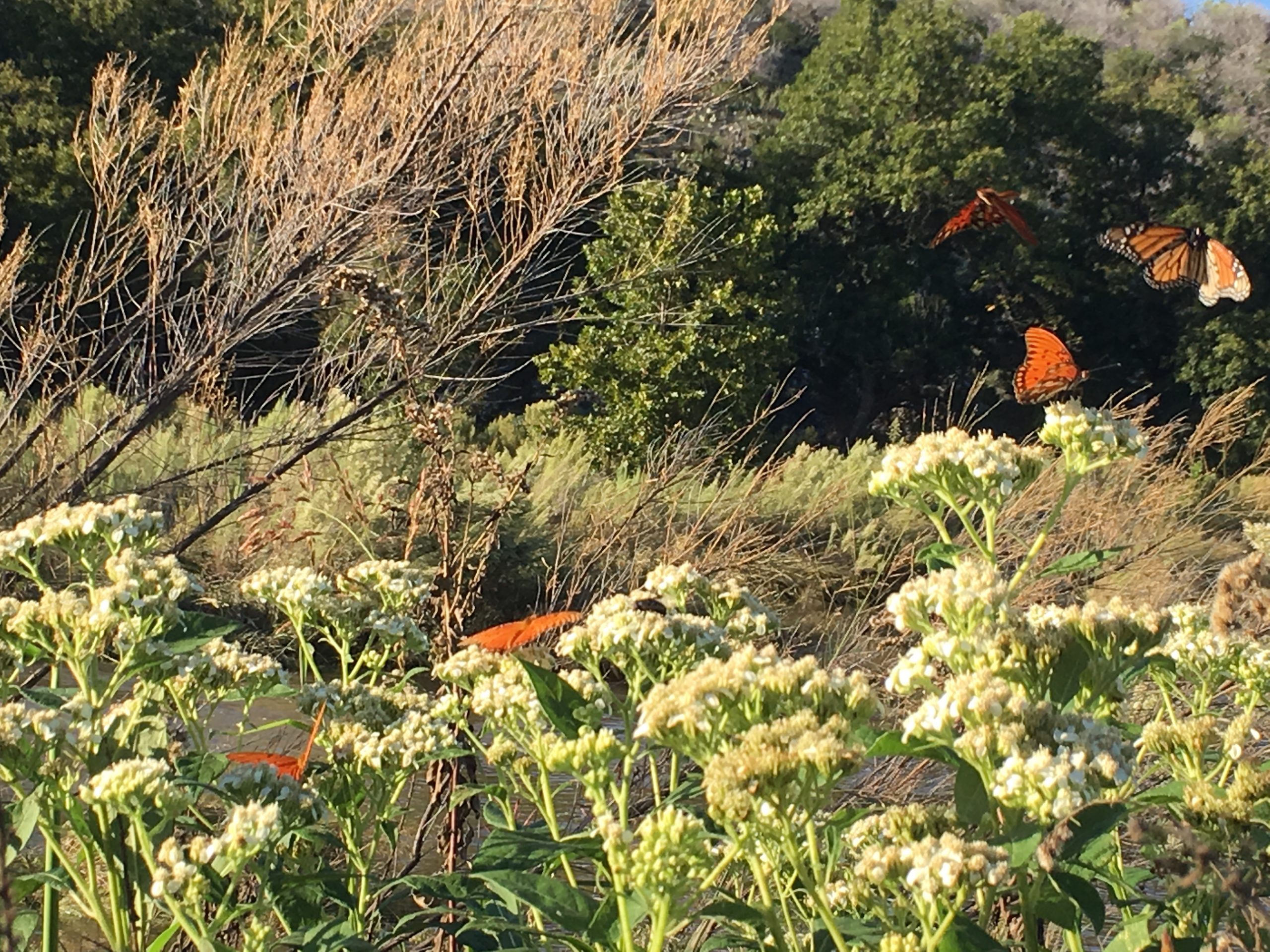 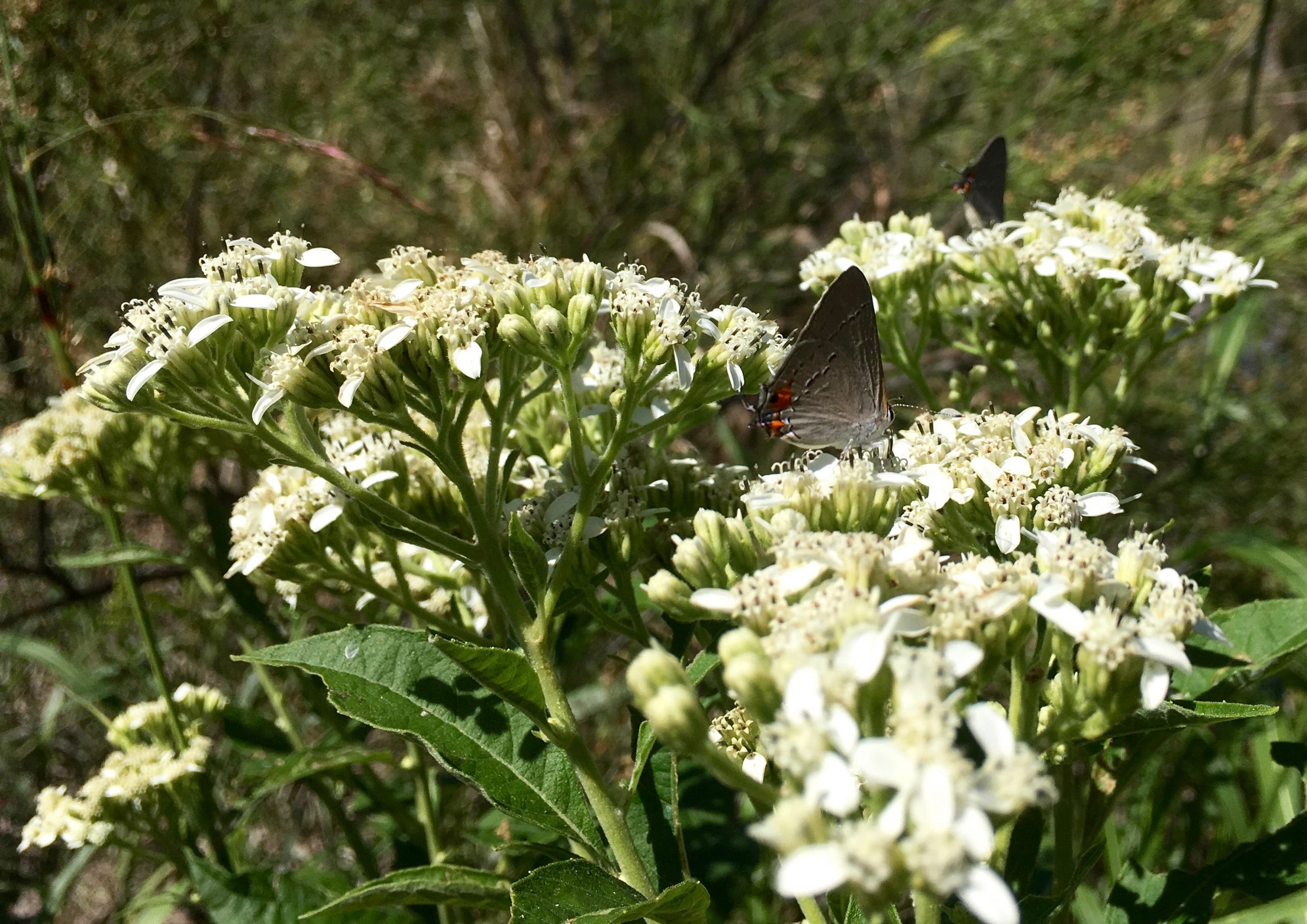 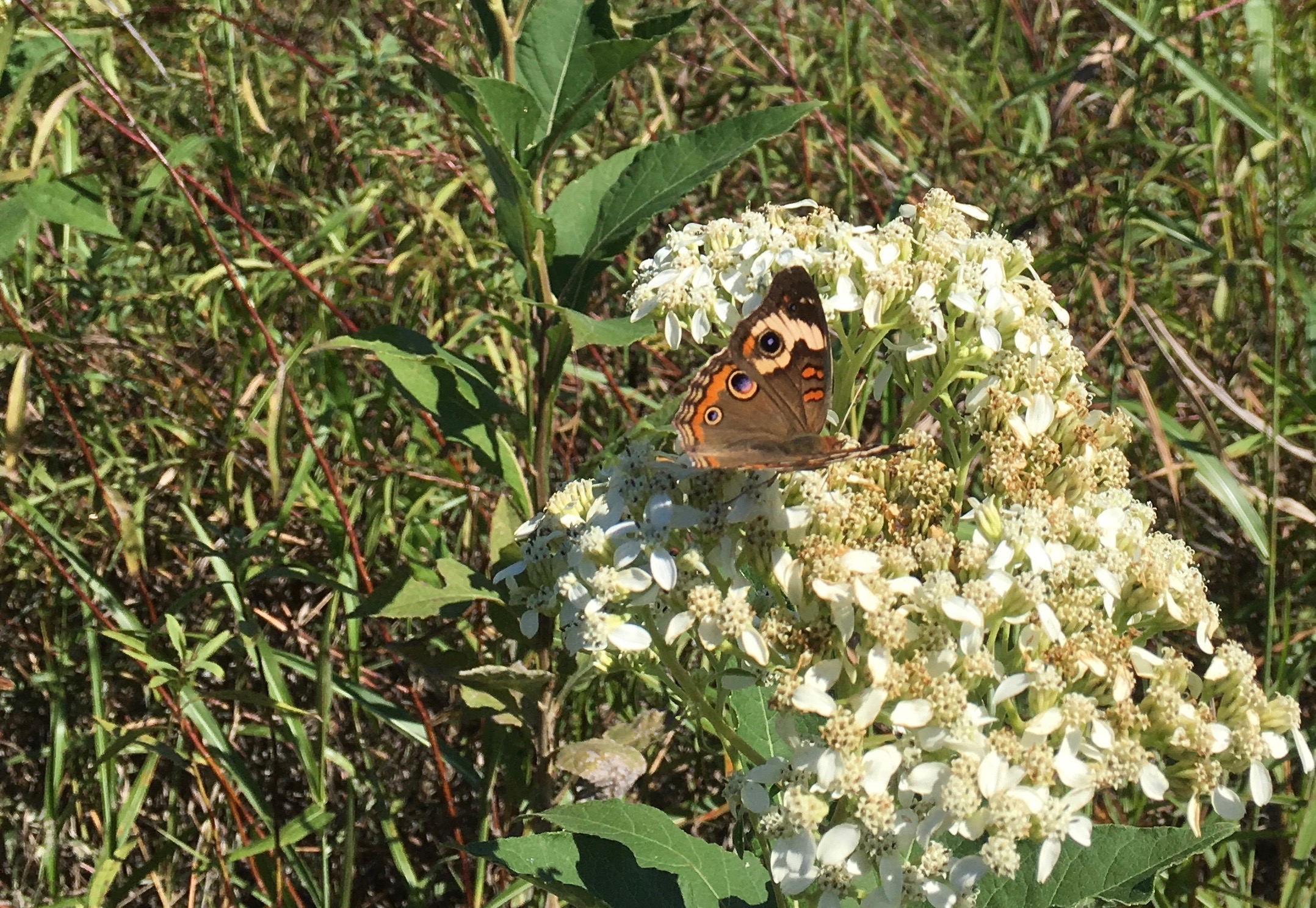 Frostweed, Verbesina virginica, was a favorite draw for Queens, Spangled, Gulf and other fritillaries, Giant, Pipevine and Eastern Swallowtails, skippers, snouts, sulphurs–everyone swarmed to the nectar fest that the recent weather pattern has made possible. And the wilted, yellowed, washed out milkweed leaves didn’t stop Monarchs and Queens from laying their eggs on remaining healthy foliage. At least one more hatch will occur before peak migration arrives the last two weeks of October. 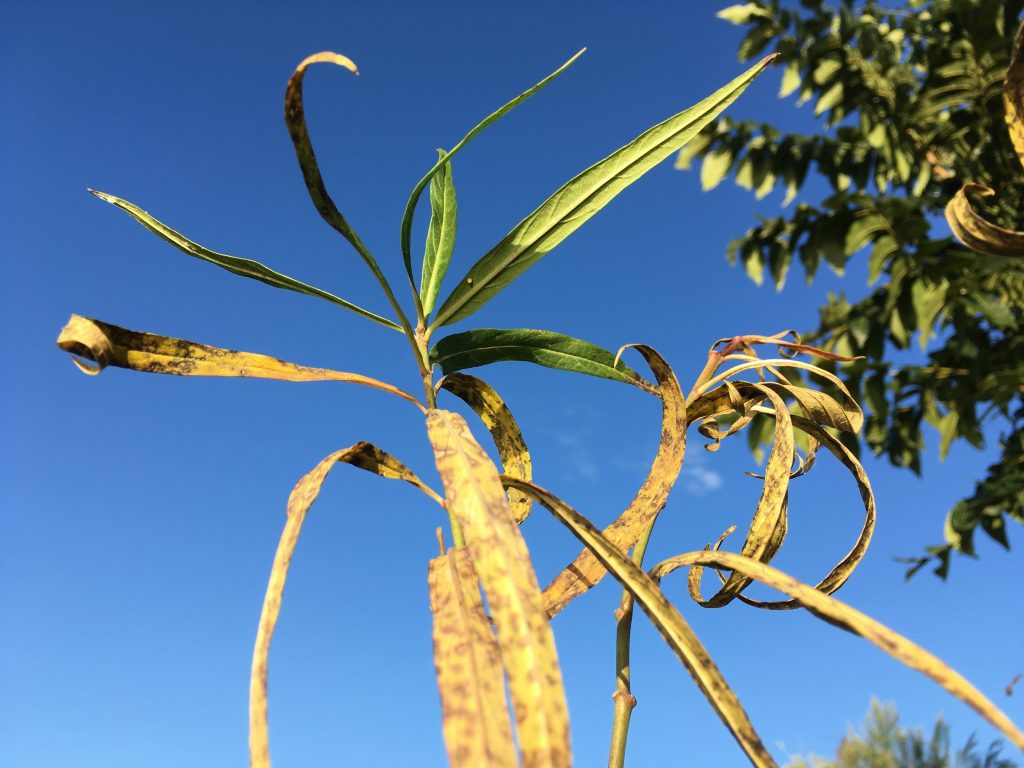 River rises six feet and drowns your host plant? No problem. Monarchs and Queens find the good foliage to deposit their eggs. Photo by Monika Maeckle

The snout-nosed butterfly invasion that hit us two weeks ago seems to bode well for butterflies in general. While the snouts were not quite as obvious this weekend at the ranch, they made a repeat–even exaggerated appearance in San Antonio midweek. 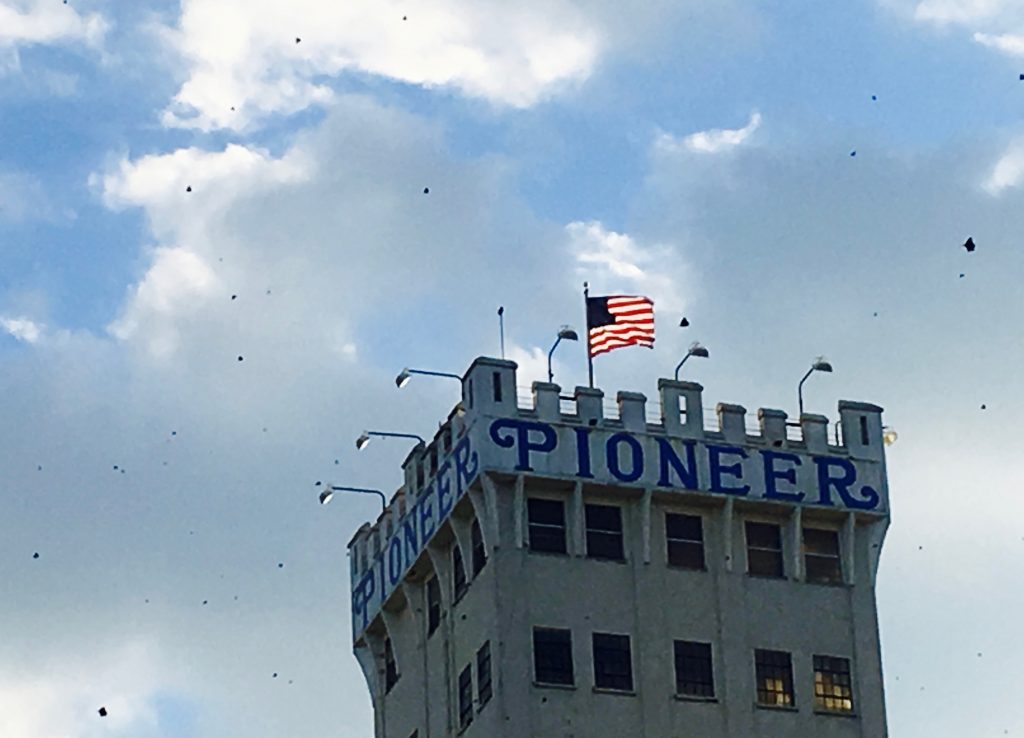 The snouts returned to invade downtown San Antonio again last week. The weather has been perfect for butterflies. Photo by Monika Maeckle

The small, orange-and-black brushfooted butterflies made headlines in early September because of their staggering presence. Just last Thursday, on September 29, literally millions of the small orange and black flyers filled the skies of downtown San Antonio, clogging car grills, spattering windshields, and confusing many who thought they were Monarchs.

“I looked outside and it was like a butterfly highway,” said Rebecca Guererro, a stylist at Mint Salon in downtown San Antonio on Thursday.
Monarchs have begun showing up in steady trickles in these parts just in the last week. The storied migrants were pushed south by a recent cold front and the dry-wet weather has set the stage for a bounty of nectar. 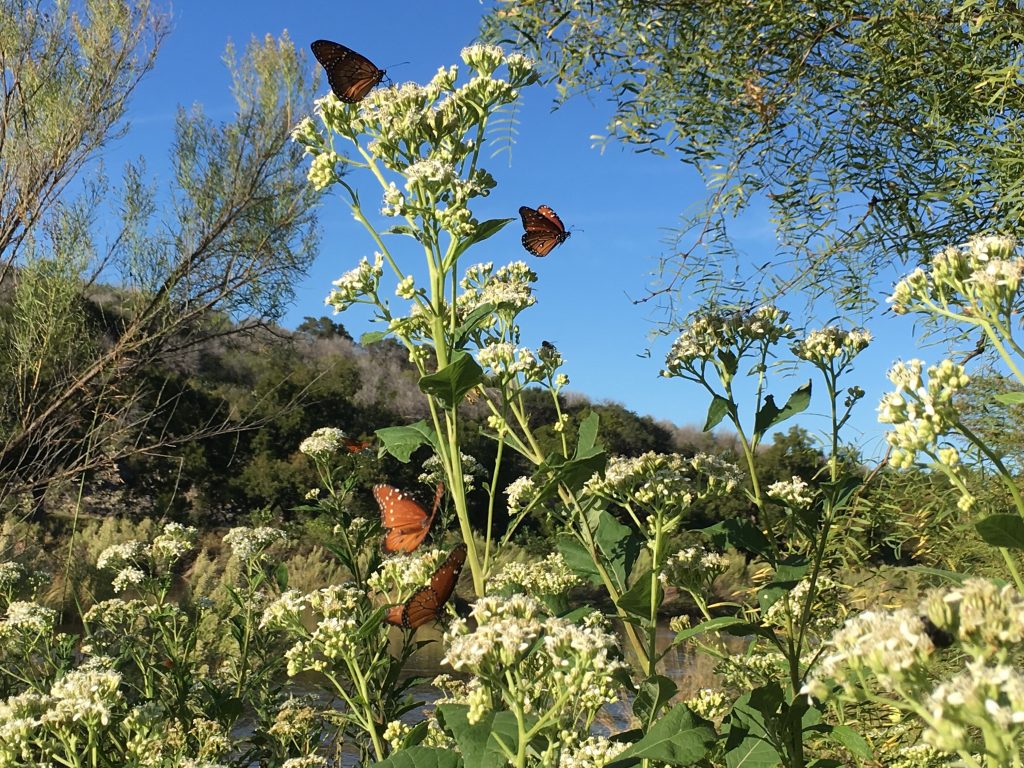 A kayak tour of the Llano revealed no caterpillars this trip, although plenty of Queen and Monarch eggs were present on the mud-coated Swamp milkweeds that bowed to the floodwaters which rose about six feet.

“A while back I pointed out the probability that the migration would be late and long this year. That is likely to be the case,” said Taylor, pointing to hot weather as the cause. “Last week was a scorcher through much of the midwest with temperatures in the 90s and high-80s over a broad area. The migration advances slowly, if at all, under these conditions. The ideal temperatures for the migrants are in the 70s and 60s,” he said.

The Journey North website reported streams of Monarchs heading south through the central and eastern flyways. The site attributed the movement to a cold front that “dropped down from the north and finally ended the unseasonably hot weather — with associated south winds — that have been holding the butterflies back,” wrote Elizabeth Howard, founder of Journey North, in last week’s Thursday migration newsletter. Howard cited peak flights along the ridges of the Appalachian Mountains over the weekend as “the first strong pulse in the Eastern Flyway.”