When aphids suck the life from your milkweed, here’s how to safely get rid of them

The dreaded oleander aphids have arrived here and are trying to wreak havoc in my gardens. At a friend’s house today, I noticed that all of her milkweed is infested beyond hope….Are there any new ideas on how to deal with them? Thanks.

Jan LeVesque is not alone in her exasperation at the hands–rather, mouth parts–of plant sucking aphids.  Anyone who raises milkweed in an effort to attract Monarchs is familiar with the soft-bodied, squishy orange insects that seemingly take over anything in the Asclepias family.

Jan, like many before and after her, posted the above query on the Monarch Watch DPLEX list, an old school listserv that goes to hundreds of citizen and professional scientists and butterfly fans who follow the Monarch migration. And as usual, the community had plenty of ideas.

But before we explore how to kill them, let’s take a look at the interesting life cycle of these ubiquitous, annoying insects, known as oleander aphids, milkweed aphids, or by their Latin name, Aphis nerii.

First off, they are parthenogenic, which means they clone themselves and don’t require  mates to reproduce. In addition, the clones they produce are always female.  Yes, that’s right–all girls. “No boys allowed.” 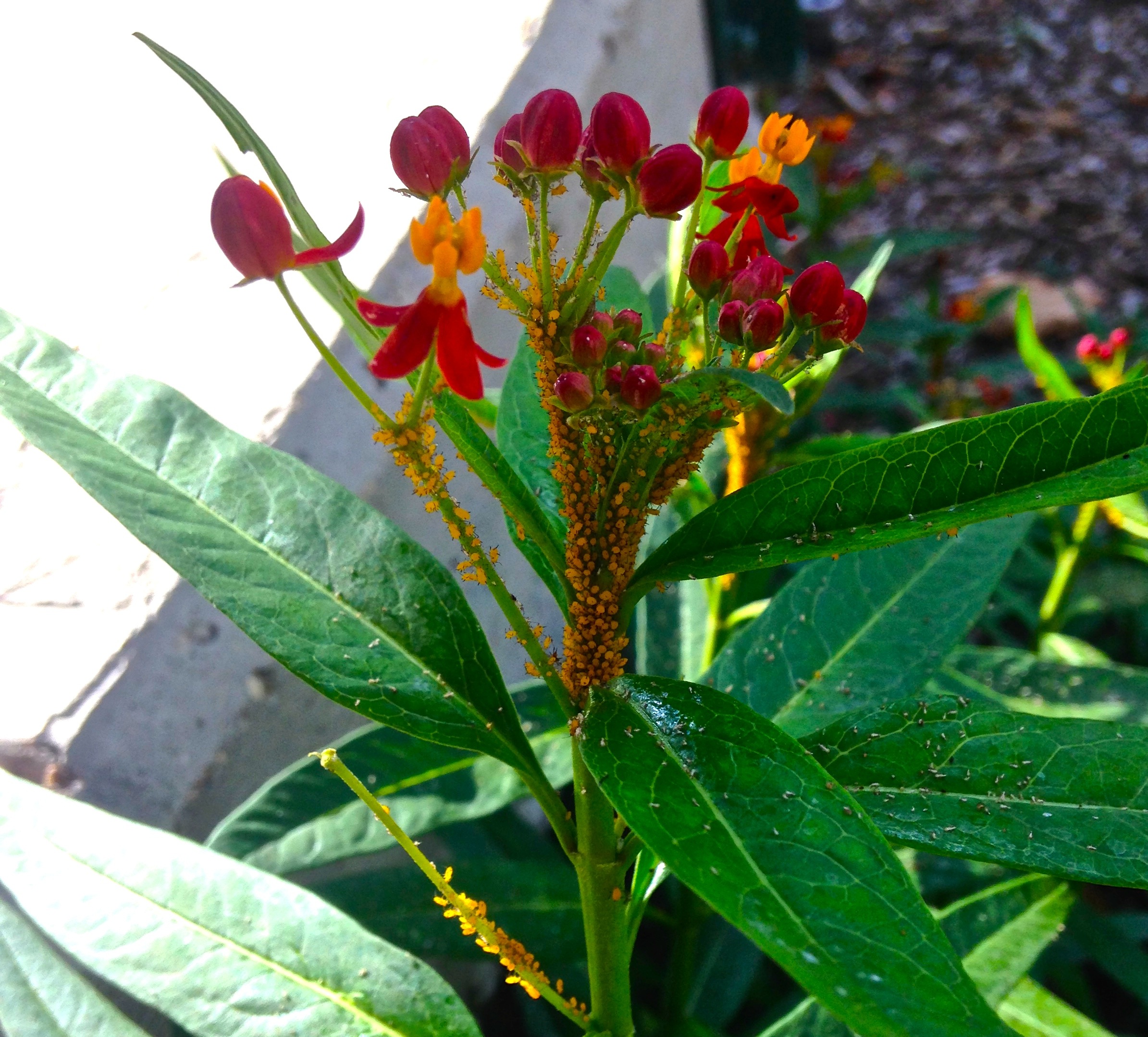 If you raise milkweed and Monarchs, you’re well acquainted with oleander aphids. Here they are on Tropical milkweed. Note the sticky, slick looking substance on the leaves. That’s honeydew. Photo by Monika Maeckle 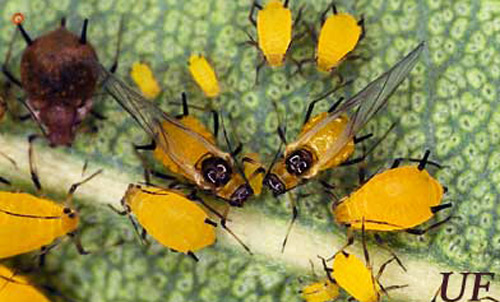 All female aphid colonies undermine our milkweeds. Photo via University of Florida

According to the University of Florida’s Department of Entomology and Nematology “Featured Creatures” website, “The adult aphids are all female and males do not occur in the wild.”  Instead, the aphid moms deposit their all-female nymph broods on the stalks of our milkweed plants.  That generation morphs four more times until they grow up to become aphid moms who repeat the process.

Even more interesting, under normal conditions, adult female aphids do not sport wings, but get this: if conditions are crowded, or the plant is old and unappetizing (which happens as the summer progresses in our part of the world), the girls grow wings so they can fly away to greener pastures–or in this case, fresher milkweed. Aphids live 25 days and produce about 80 nymphs each.

This brilliantly efficient method of reproduction, says Featured Creatures, is one of the reasons “large colonies of oleander aphids…build quickly on infested plants.”

Small populations of aphids are pretty harmless to the plants, but when you get a large colony, the milkweed suffers. The aphids insert their piercing mouthparts into the milkweed, literally sucking the life out of it as they enjoy the sweet liquid that courses through the plant. The high concentration of sugar in that liquid means the aphids have to eat a lot of it to get the protein they need.

That results in a profuse amount of excrement, called honeydew. It is prolific and forms a thin, sticky layer on the leaves of your milkweed, choking the absorption of essential nutrients.  It can also cause sooty mold, an ugly dark fungi that can cover your milkweed.

We have a fair amount of milkweed near the house and it’s been aphid free so far – except for one incarnata shoot on which a 3 inch long colony had formed with probably more than 500 aphids of all sizes. Not having mixed up any fancy aphid remedy and not having insecticidal soap, I looked under the sink for the handy spray bottle of 409. It wasn’t there – so, I grabbed the Windex instead. Last evening a quick inspection showed that all the aphids were blackened and dead. I checked again this morning and spotted one aphid. The plant seems unaffected by the treatment.

Once you have well-established infestation of aphids, the plant just goes downhill. The aphids themselves are also highly appetizing to Ladybugs, wasps and syrphid flies–all insects that eat aphids and Monarch or Queen eggs with equal abandon.

When I get a serious aphid infestation, I typically use a high pressure spray of water to blow the bugs off the plant. That simultaneously washes the honeydew off the milkweed, which will deter the arrival of ants and also clean the leaves so they can absorb sun, air, water and nutrients to fuel their growth.

Some gardeners like to use alcohol or other additives with the water spray, but I prefer to keep that stuff off my plants. 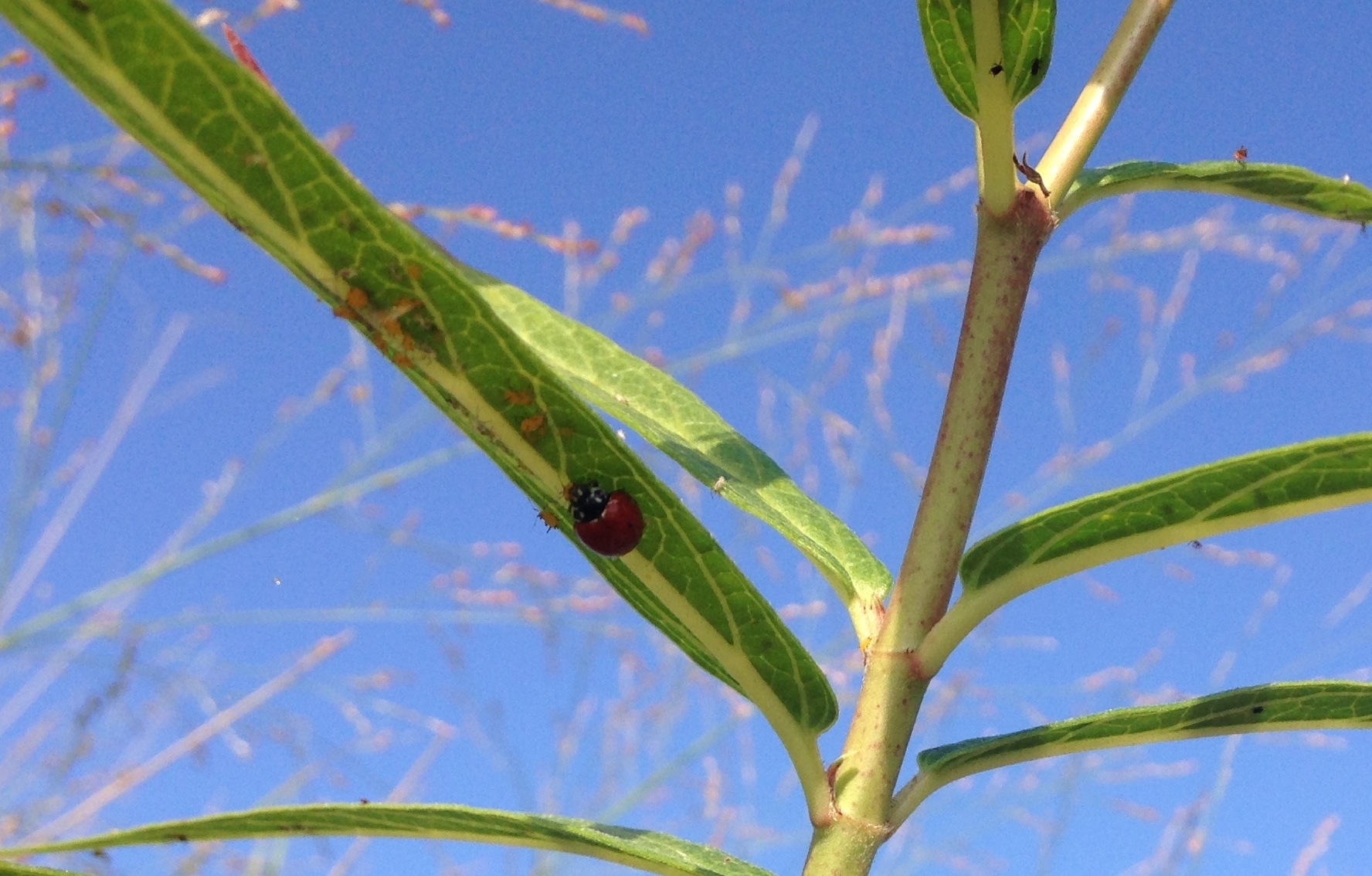 As Dr. Karen Oberhauser of the University of Minnesota and founder of the Monarch Larvae Monitoring Project wrote to the DPLEX list in July of 2015, “Detergent treatments will kill any live insects on aphid-infested plants, including Monarch eggs, Monarch larvae, and aphid predators like syrphid fly larvae, ladybug larvae, and lacewing larvae.”

Alas, even Dr. Oberhauser, who has decades of experience with aphids, admits “There is really no good way to kill aphids without killing everything else, except by trying to lower the population by carefully killing them by hand.”

If Monarch cats are not present, I spray with insecticidal soap and then rinse later with water hose. If that is ineffective, I move up to Neem oil and rinse it off also later. One and/or the other are very effective…. It is easy to go from 1 to 1,000s of aphids in a very short period of time.

Another option is biological control. Lady beetles or Ladybugs feed primarily on aphids. Somehow they seem to magically find their way to our milkweed gardens to feast on the yellow critters. Ladybugs can be purchased in bags at some garden centers and released to do their jobs.  But remember–they also eat butterfly eggs.

Hover flies and wasps also eat aphids. Wasps have a bizarre practice of laying their eggs on the aphids, then eating them from the inside out, leaving a brown shelled carcass in their wake. We often find these hollow corpses on our milkweed plants.

One good thing about aphids: if you see them on a plant in a nursery, you know the milkweed is clean, and has NOT been sprayed with systemic pesticides. We all want perfect looking plants, but the occasional aphid is a good sign that your plants are pure. See this post for more on that topic.

Need more ideas for getting rid of aphids?  Check out this useful post from The Monarch Butterfly Garden.  If you have new tips not covered here, please leave a comment below.  Good luck! 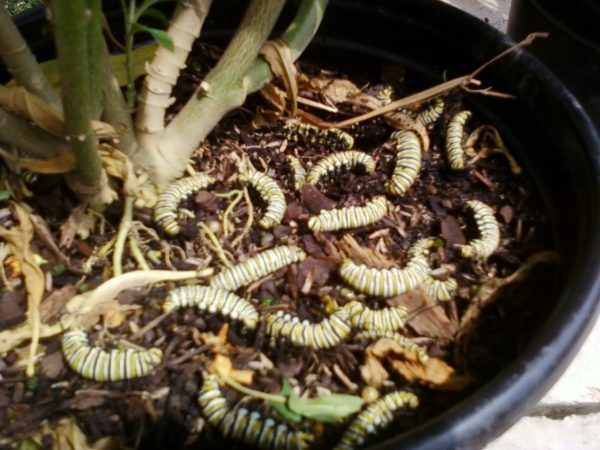 Pesticides will kill aphids, but they often remain in the plant for months and will also kill Monarch caterpillars. Photo by Sharon Sander